We reviewed the 2019 backpack coolers from YETI, OtterBox, Hydro Flask, and more to find out which is best. Read our take on ice retention, portability, and cooler features.

In 2019, cooler brands big and small invested in developing backpack models. Cooler backpacks haul ice, beer, and food easily to the campsite, park, or hiking trail. But each cooler comes with advantages and disadvantages.

In our test, we discovered ice retention isn’t everything. With cooler backpacks, key attributes were portability and comfort. When you load an entire backpack full of ice, water, and beer, it gets heavy quickly.

Caveat: There wasn’t one clear winner in this review, and the brands aren’t listed in any particular order. But each cooler succeeded in certain areas. We’ve organized this review with modules detailing each product, noting where each excelled and lagged.

For a strict rundown on which cooler held ice longest, hop down to the ice retention test. 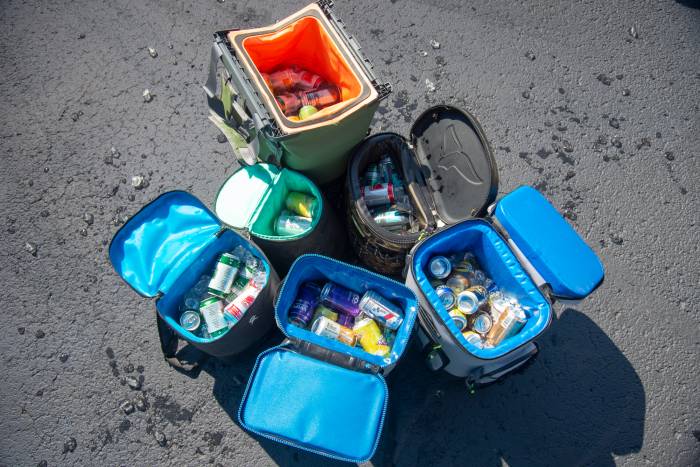 The YETI Hopper BackFlip 24 is a rugged, well-built cooler with lash points on all sides. It sports one central zipper, YETI’s beefy HydroLok — which we’ve tested before, and it didn’t break or leak. And it makes the BackFlip waterproof. 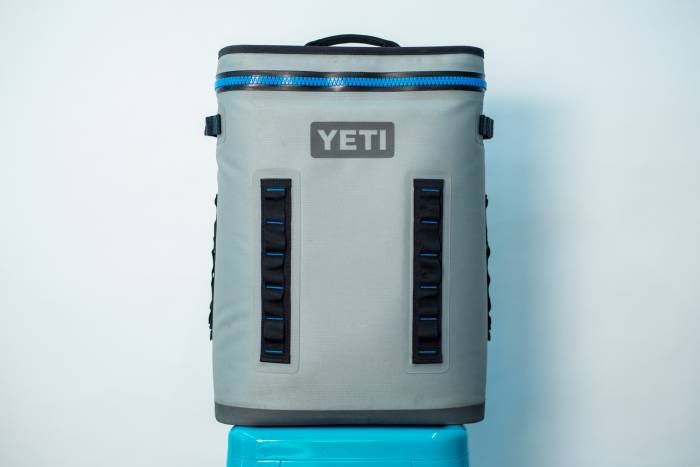 YETI’s DryHide shell is on the outside. It withstands abrasions well, didn’t rip in our field tests, and is the same shell you’ll find on the rest of the Hopper cooler series. The cooler’s bottom allows it to stand straight up, and you can haul it with a top lid, backpack straps, or two side straps.

The YETI excels at delivering a compact package and proved one of the comfier models we tested. The shoulder straps are wide, and it comes with an optional hip belt.

Loaded full, the cooler was comfortable on short hikes of up to 2 miles. Holding the cooler for more than a few hours started to feel uncomfortable. But load discomfort was common across all brands — these products are coolers first and backpacks second.

There aren’t any zipper pockets on the BackFlip except for the main compartment. So if you want to attach your cell phone and keys to the cooler, you probably need to improvise. 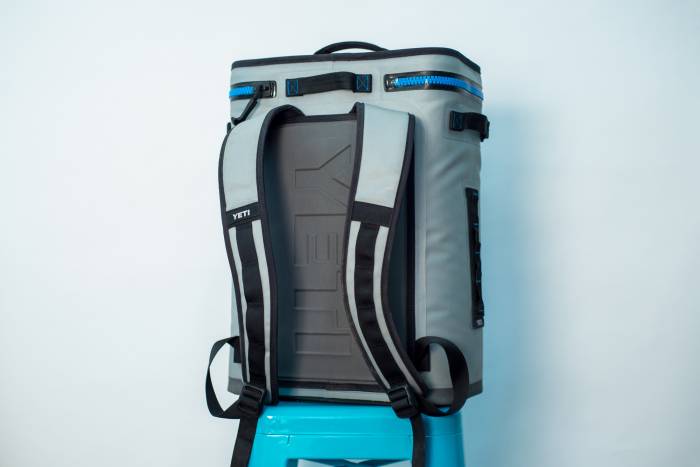 As an add-on, you can buy a SideKick Dry, $50, which acts as an external compartment ripe for keys and small belongings.

In all, the YETI was one of our favorites. It kept ice for up to 2 days in 100-degree heat and will likely last for years.

One of the largest coolers we tested, with thick insulation, the Cordova Soft Sided Backpack cooler held ice for a long time and was comfortable to carry. And at $200, it presents a bargain for its size compared to other cooler backpacks. 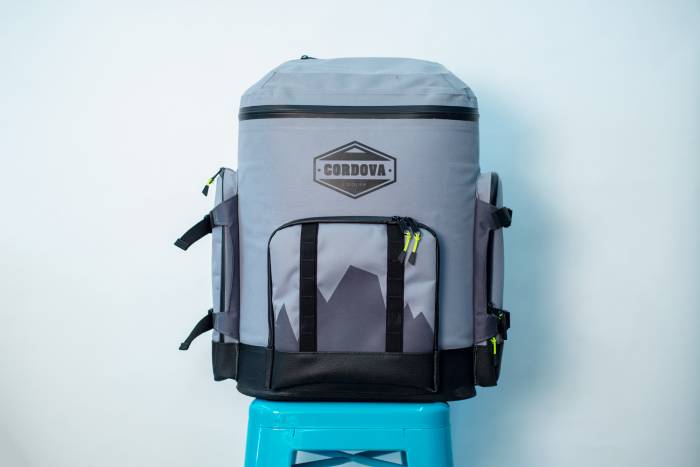 The Cordova was bulkier than other options, with plenty of external zipper pockets and lash points. In total, four zippered pockets should hold a few people’s belongings. It comes with a hip belt and was comfortable enough to carry on hikes up to 3 miles.

On the outside, a 1,000-denier nylon shell withstood abrasions camping and hiking. Cordova touts its cooler can hold up to 36 12-ounce cans of beer and 15 pounds of ice. That’s a large capacity! 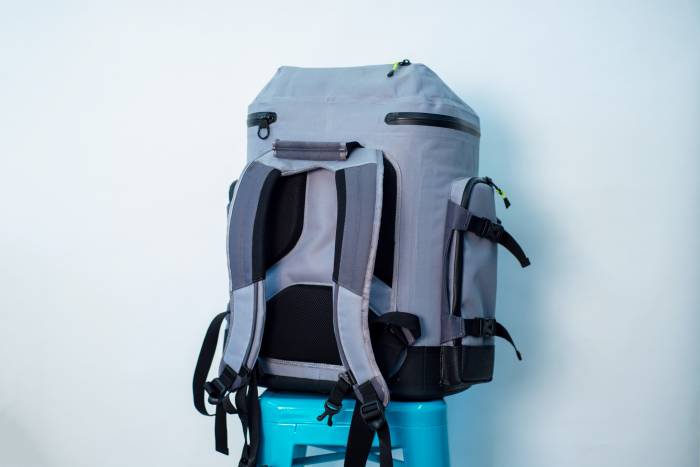 While we tested this pack for only a few weeks, it impressed us with its performance at this price point. Time will tell if the materials hold up, but for now, the Cordova Soft Sided Backpack is a favorite.

The Boss is a roll-top, waterproof backpack cooler from Icemule. Its capacity is 30 liters (24 cans), and the exterior is full of lash points and pockets for securing extra gear. 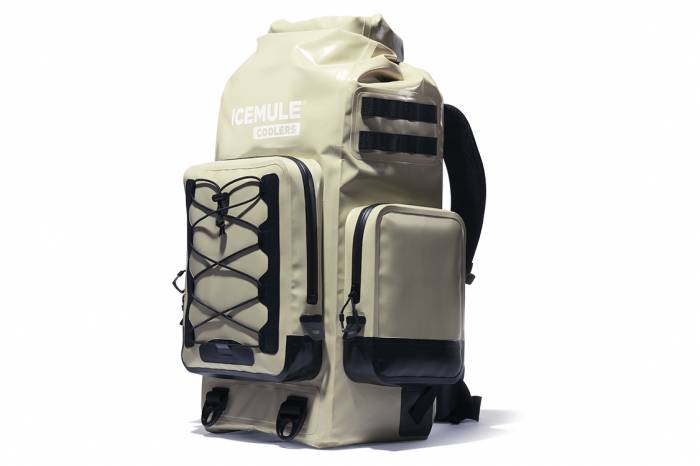 During a 4-day, 60-mile float trip on the Buffalo River in Missouri, the beer stayed cool and the Boss never broke.

On the outside is a super-durable fabric that holds up to abuse. It’s more rigid than expected because of the foam insulation. But it didn’t feel like you could rip it in our tests.

Its main compartment perfectly fits a 24-pack of beer, with the case on. And if you’re really pushing it, you can fit another six in. And on the outside are two waterproof zippered containers. These stayed dry in the river, which surprised us. 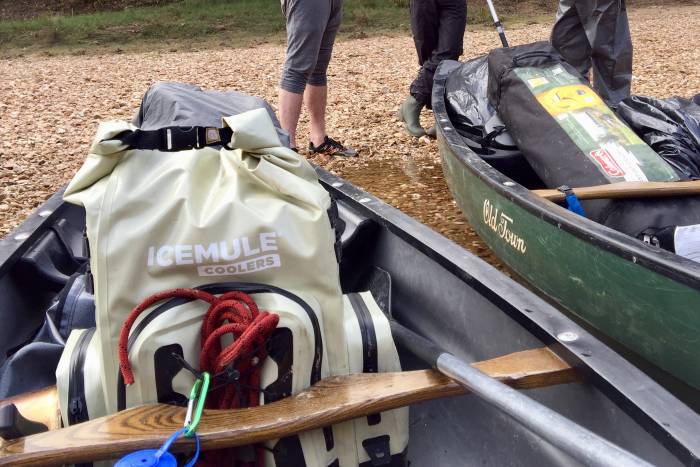 The shoulder straps feel good during heavy loads, and it disperses weight evenly along your back and hips.

The Icemule Boss is pricier than some of the coolers on this list, but its superior waterproofing and durability make us think its worth the price tag.

From Hydro Flask, the Unbound Series 22L is a waterproof option with many zippered pockets on the outside for carrying your belongings. Its large shoulder straps facilitated comfortable carrying for hikes of up to 2 miles, and it held ice for up to 2 days in 100-degree heat. 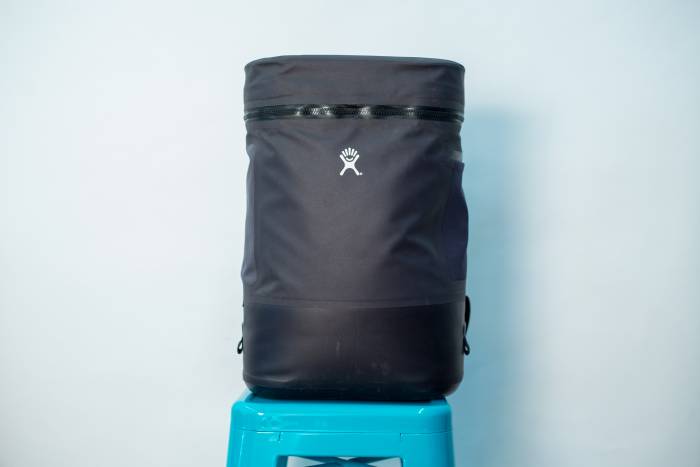 The cooler has a sleek, minimal look with one zippered mesh pocket, one large top pocket, and another mesh pocket.

The Hydro Flask also uses a big-toothed, watertight YKK AQUASEAL zipper that kept water out. Opening and closing the zipper required some force — so, unfortunately, the zipper pull broke in normal use during our test.

This was annoying but easily fixed by adding a zip-tie loop. We’re testing another Hydro Flask cooler now to see if this individual zipper pull was faulty or if this is a design issue. 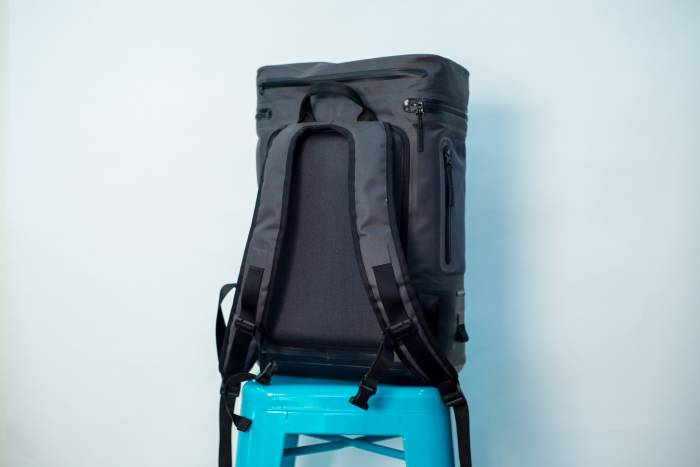 As for caveats, when not full of stuff, the top pocket can give a droopy and deflated look. And the cooler doesn’t have a hip-belt option. But in all, the cooler suited our needs and offers a bit of customization with all the color options.

The Orca Podster is a sturdy and small cooler that costs much less than most of the coolers in this review. It has a bounty of attachment straps on the outside, is waterproof, and uses a German TIZIP Masterseal zipper. 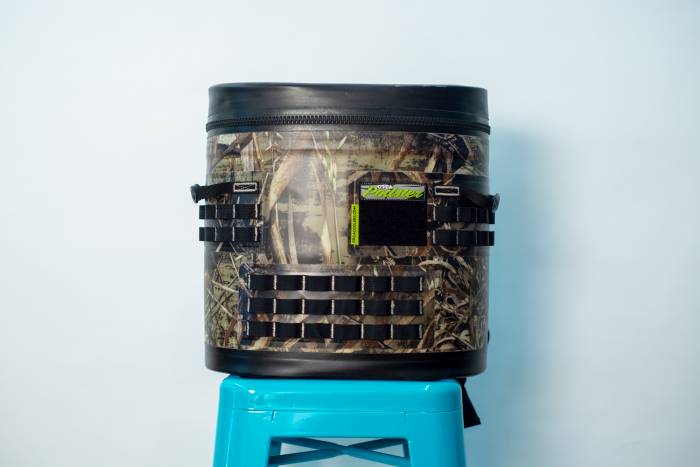 The Podster we tested holds 13 liters and costs $200, but Orca also makes a 27-liter option. We found the Podster great for day trips where we didn’t need beer and food for more than two meals. For overnight trips, you may have to refill this cooler often.

In testing, the cooler held ice for a respectable amount of time. Its stout construction didn’t break down nor did any parts fail.

The Orca’s straps were thinner than those of other coolers, but it didn’t hold as much as others. It comes in seafoam, fuschia, coral, and Realtree camo. 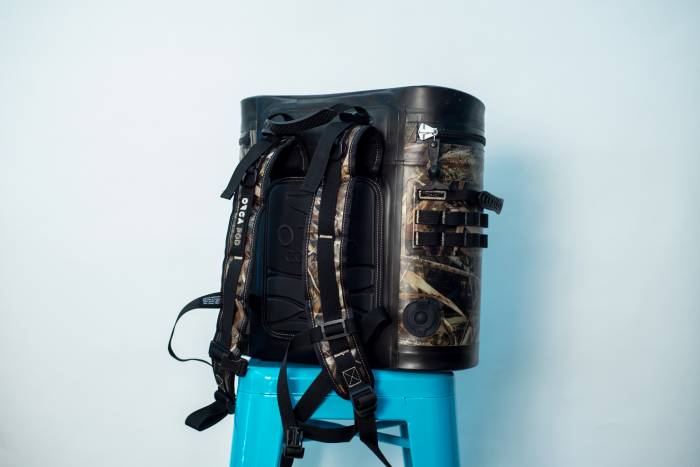 For a smaller and cost-friendly option that will easily keep ice for an entire day, we recommend the Podster.

The OtterBox Trooper, far and away, won the ice retention test. But it came with the downside of being one of the more uncomfortable coolers we tested. 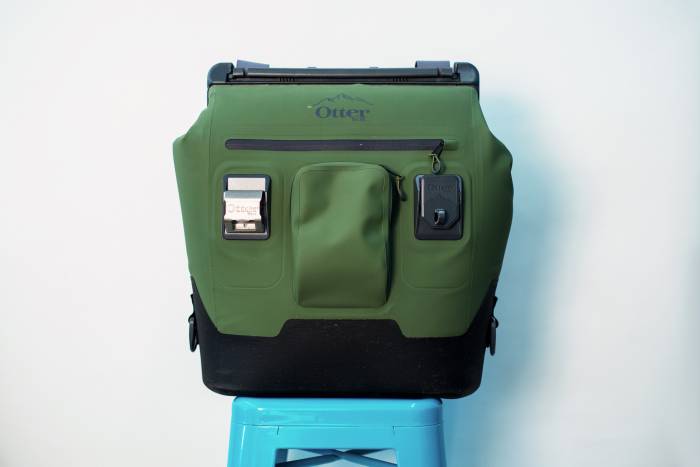 OtterBox constructed the Trooper with a clamshell opening on top, which can be tricky to operate at first. Rigid plastic lines the top, and the cooler can open wide quickly but feels clunky to use and align properly.

On the outside are plenty of extras like a bottle opener, a dry storage pouch, and a zipper pocket. It had the largest capacity at 28 liters, which was plenty for two nights of camping. The Trooper comes in camo, Hazy Harbor (gray/blue/green), and Alpine Ascent (green/black/orange).

The shoulder straps are close together and can be uncomfortable for people with larger chests. And because of its increased capacity, this cooler gets very heavy when fully loaded, which quickly translates into a burden on the back. 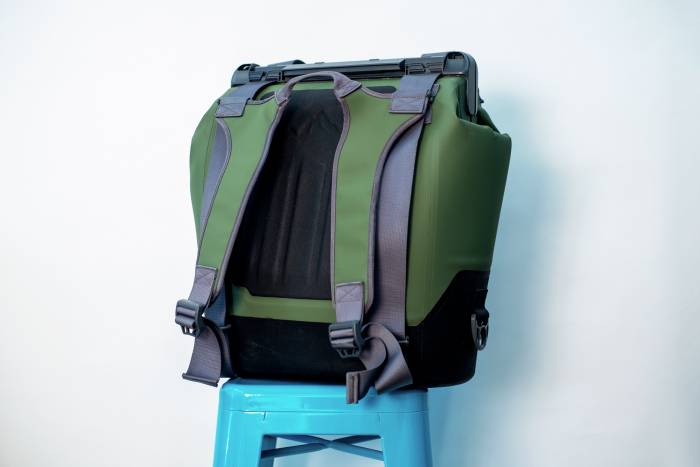 Go for the OtterBox if ice retention is your biggest buying point in a cooler. But the Trooper’s strap construction and clamshell opening left us wondering if that perk was worth the purchase.

If you don’t intend on long hikes of 3 or more miles, it’s a good choice and has a much different design than all the other coolers on this list.

Editor’s note: We received a preproduction model that experienced minor delamination on the interior and exterior. We spoke with representatives for the brand, and OtterBox said it had addressed the issue prior to the product’s release. According to OtterBox, consumer-model coolers will not face similar defects.

The most fashion-forward and least expensive option on the list, the Corkcicle Eola Bucket Bag was a fun option for day trips. 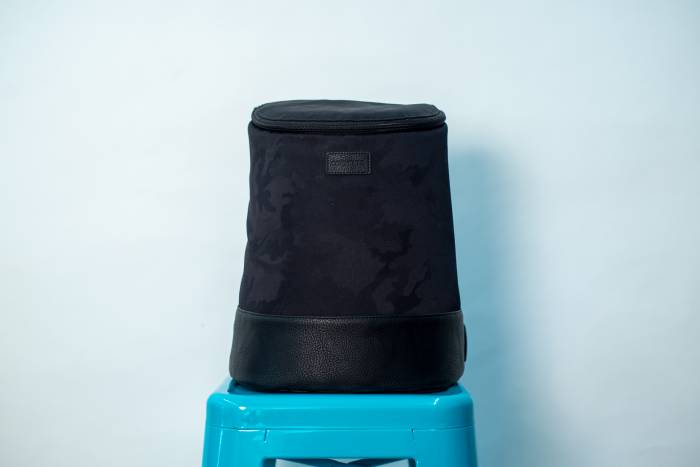 Corkcicle designed the Eola Bucket cooler with one zippered opening on top and an accessory zippered pocket on the back of the pack. It holds 12 12-ounce cans and uses a non-waterproof YKK zipper as well as a vegan-leather handle and base.

It’s the smallest cooler of the bunch, and we found it a great option for days at the park or short hikes. Ice lasted more than 24 hours in this cooler. Compared to the other coolers, however, it lasted the least amount of time in the ice retention test.

The shoulder straps are thin, and because of its smaller capacity, the cooler rarely felt uncomfortable. I also got the most compliments on this one by far when I wore it around. 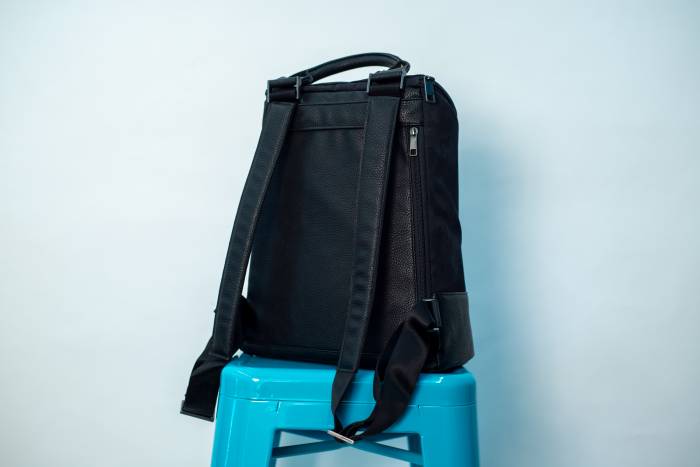 The Eola Bucket Bag costs a fraction of the other coolers on the list and comes in gray, black camo, and seafoam colors. We imagine this to be a good choice if you don’t intend on roughing it around or relying on it for multiple days.

The same week Denver tied its all-time record high temperature, we conducted the backpack cooler ice retention test. For 3 days, we pitted the coolers against 100- to 105-degree Fahrenheit heat.

We filled each cooler to half capacity with ice, then filled the remaining area with 12-ounce cans. Then we zippered ’em shut and let ’em bake.

Three times a day we checked the contents and measured the temperature. When the ice started to look slim, we checked hourly. After working hours (5 p.m.), we moved all of the coolers indoors so they wouldn’t get stolen. We placed them outside again at 7:30 a.m. Because of this, we didn’t reach exact times for the YETI and Hydro Flask, which both ran out of ice after hours. For those coolers, we provide the best estimate on ice retention time.

This test doesn’t yield hard and fast rules for how long the coolers will last. We performed the test this way so all the coolers faced the same conditions, and to get a rough idea of how long ice will stay frozen.

Here are the results:

In addition to the ice retention test, we brought the coolers on weekend camping trips and hikes, days at the park, and weeknight barbeques.

Hikes ranged from 1 to 3 miles in wooded, rooty, and rocky terrain. The camping trips were typically car camping with minimal hikes to the campsite. The coolers frequently moved from outdoors, indoors, and in cars.

Editor’s Note: We reviewed the Icemule Boss after the initial ice retention test, hence its exclusion.

Which Cooler Is Right for You?

Backpack coolers strike a niche in the cold-storage market that puts portability at the forefront. Whereas other coolers feel bulky or require two people to carry, cooler backpacks are easy for one person to carry.

On the other end, soft-sided coolers emphasize accessibility. That’s part of the reason this review didn’t emphasize ice retention, as it’s not the sole factor in choosing a cooler.

If you’re going for a day trip, consider the Orca or Corkcicle. For weekend camping trips, try the Hydro Flask, YETI, Icemule, or Cordova. And for hot extended weekends, the OtterBox is your best bet.

Be sure to consider each cooler’s unique accessibility options, try one out in a store to see if it fits, and get one that suits your specific needs.

Up Next: This Lowe Alpine Backpack From the ’90s Is a GearJunkie Favorite

Saving…
This Lowe Alpine Backpack From the ’90s Is a GearJunkie Favorite
Gear for the Elements: What to Take on a Winter Hike
×