How much toughness can you expect from a cheap watch? I aim to find out, with an extensive head-to-head battle between the venerable Casio F108 and the upstart Timex Marathon.

These sub-$20 timepieces were hammered by cold, mud, storms, and — well — a hammer in a test to crown a budget champion for the outdoors.

First, the obvious: Why the Casio F108 and Timex Marathon? After all, Casio makes a ton of watches under $20, some with better water resistance and longer batteries. The simple answer? Availability.

Though I purchased the pair from Amazon, I saw both at my local Walmart, identically priced at $15.88. The “disposable” part of this test refers to their ease of replacement. At under $16 from a big-box store, it doesn’t get much more basic. 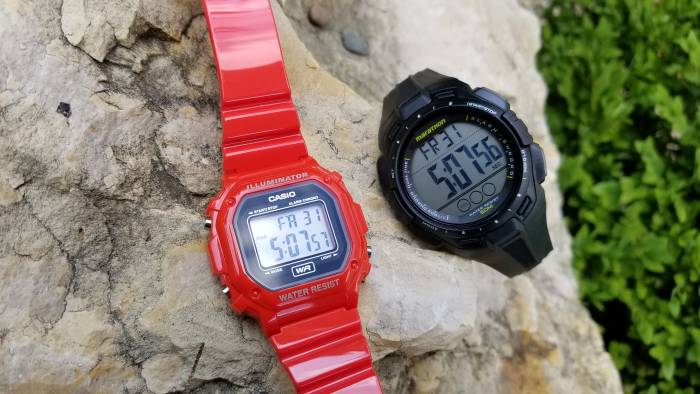 Let’s briefly touch on their everyday appeal. Both come armed with a wealth of function, including stopwatches, nightlights, alarms, and 50 meters’ worth of water resistance. I spent several pre-test days with each, from shower to jobsite to gym. Both feature plastic cases and rubber bands, though the Marathon includes steel clasp hardware.

Still, the Casio proved to be the more comfortable wearer of the two, mainly due to its lower profile. Their cases measure an identical 43 milimeters, but the Timex was generally more legible. This is due to its larger display, though its acrylic crystal is reputedly less durable than the F108’s mineral glass. Will this come into play in the final result? Let’s find out.

To test performance in extreme weather, I decided to expose the contenders to my freezer — conditions typical of a Wisconsin winter. Both were synched to atomic time and placed inside. 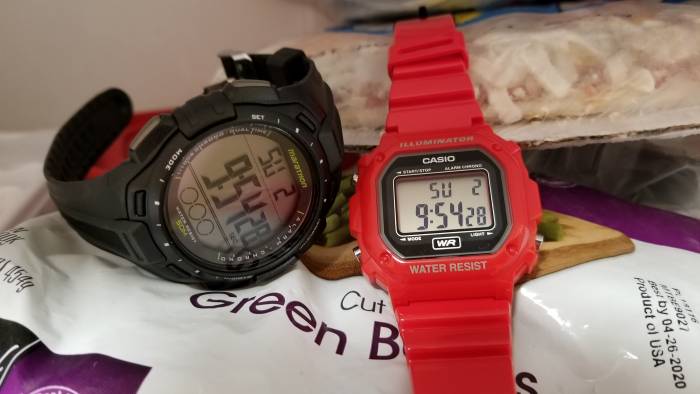 After an hour and a half sitting between the green beans and pizza, the Casio lost just one second versus the Marathon’s approximately 1.25. I was ready to consider this test a wash. That is, until both had rested on my windowsill for a few minutes. 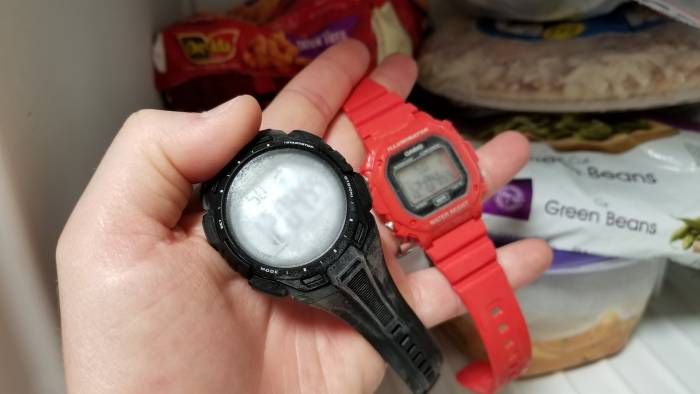 Remember that large display on the Timex? Well, it frosted over much more noticeably than the Casio. Whether it’s a function of its size or material, this impaired visibility made for a much easier decision. 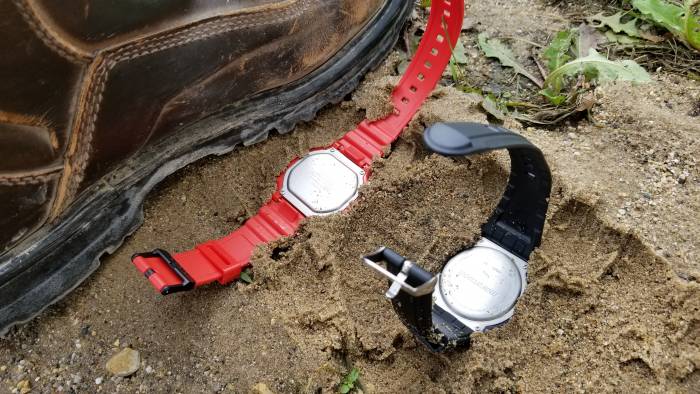 The rain has been more or less constant over the past few weeks in southern Wisconsin, so I devised another challenge. Step 1: Put on boots. Step 2: Drop watches in mud. Step 3: Walk back and forth over watches. 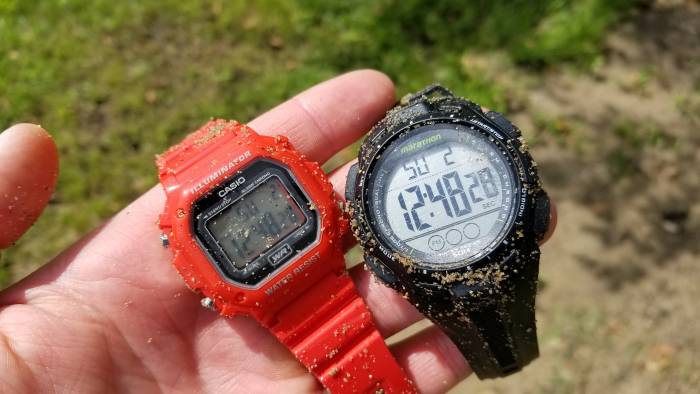 This was a pretty simple test, and both performed admirably. The Marathon’s additional nooks and crannies managed to collect a bit of extra grit versus the smooth Casio, but the 50-meter water resistance held on each timepiece. After a quick rinse in a neighboring puddle, both were ready to proceed. 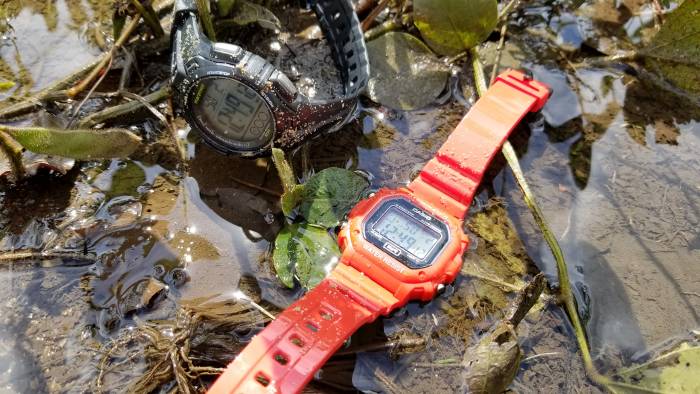 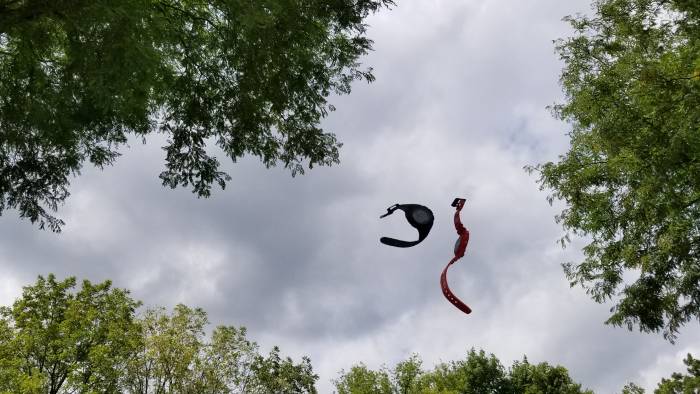 This test was meant to accomplish two things: to determine the impact resistance of the watches and to make the neighbors question my sanity. I spent 10 minutes on the sidewalk in front of my apartment, tossing both timepieces about 10 feet in the air. After a few impacts, the results were pretty clear.

Let’s talk about the Marathon first. Its plastic case took a significant beating here, and the MODE button appears to have partially caved in. It still functions, but every landing produced a loud “BEEP.” After the third impact, the spring bar holding the buckle popped out. I was able to find most of the parts, but the actual metal piece that fits into the band holes mysteriously vanished. I’m sure it would have slid back into place if I’d been able to find it. 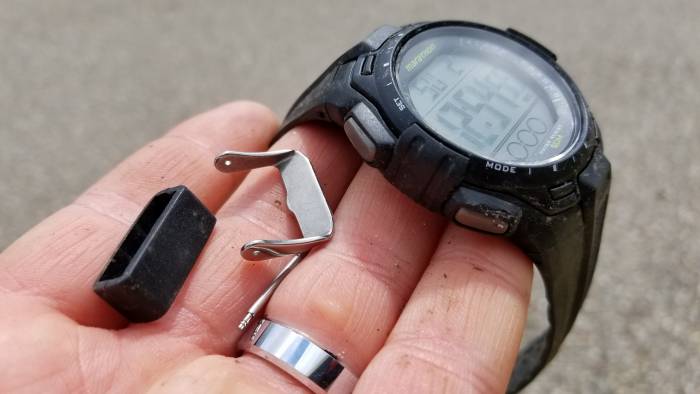 This is ironic, considering the predominant attitude toward the plastic hardware on most low-end Casios. While the Marathon struggled in flight, the F108 managed to stick its landings. The metal pushers showed no ill effect, and the plastic case took only minor damage from the pavement.

After a few leisurely tests, it was time to put the hammer down (literally) on the case and crystals of these battered timepieces. I positioned each in a narrow beam of light on my basement floor and brought in a lovely assistant (read: my wife) to help.

The Marathon’s contoured band made it difficult to land a square hit on the crystal. Still, I managed to get a few solid impacts. This did no favors to the acrylic, and I detected a subtle dimming of the digital readout. Again, the watch beeped repeatedly in protest.

The stoic-faced Casio had no such protection. I was certain that its flat surface would crack under the full force of the hammer. But, from the first flush smack of impact, it showed no signs of failure. It shrugged off half a dozen impacts, gathering little more than a few additional scuffs and a dent in the steel case back.

Once my wife finished dropping the hammer, she went upstairs to grab a load of laundry. This gave me an idea. After a several hours of freezing, falling, and smashing, both timepieces needed a thorough rinse. Into the laundry sink they went, right next to the drain line for our washing machine. 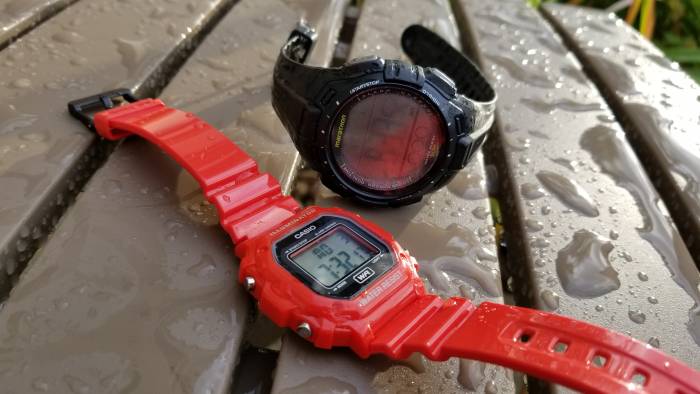 While the watches were cleaning up, the weather outside was turning dark. Another idea hit me like a bolt of lightning. I retrieved the timepieces from the sink and brought them out to the porch, where they stayed all through the stormy night.
With the dawn came a clear victor. 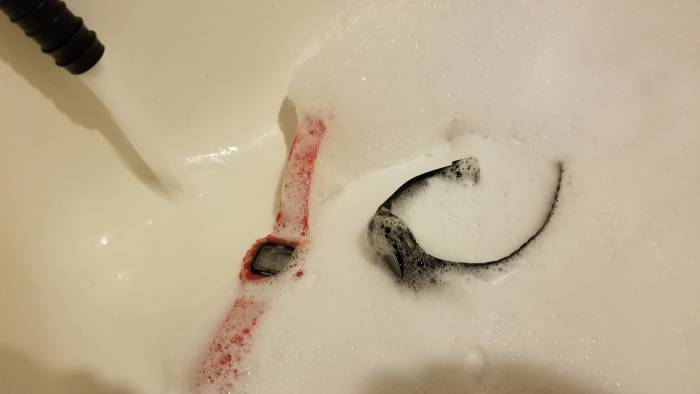 While the Casio shook the rain all night long, the Marathon was left thunderstruck. Condensation found its way into the case, clouding its display and ruining the electronics. A pale shadow of twisted time flickered over the Marathon, but the Casio’s heart beat steadily on. After another hour, the Timex’s Indiglo flared to life, stuck on, and abruptly gave up its quartz ghost. 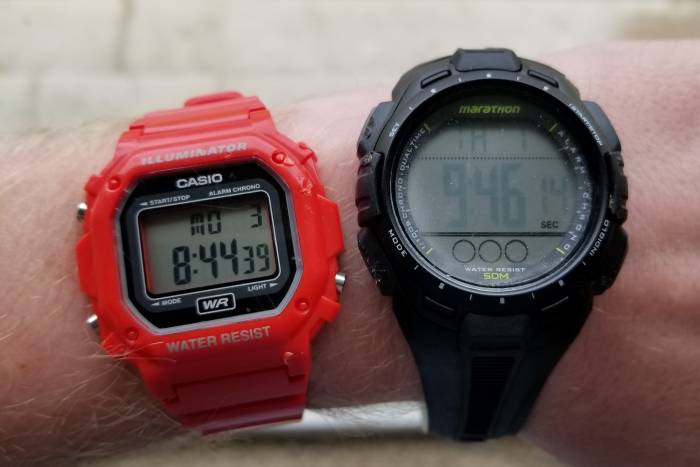 In this battle of the budget watches, the venerable Casio F108 wins via fatality. The Marathon, whose very name implies long-term endurance, failed to complete its rugged race. 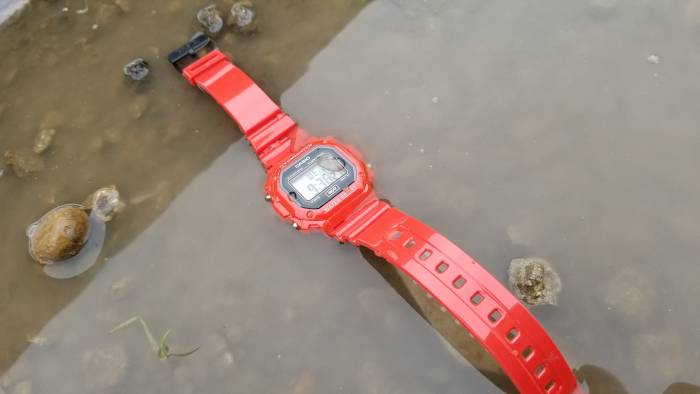 As for Casio, I’m beyond impressed with the F108. We’re used to seeing its G-SHOCK line get all the credit, but it’s good to know that there’s a lot of durable DNA in the brand’s basic offerings. The F108 proved to be an exceptionally solid timepiece, and I have no problem recommending it. Now, where can I find new contenders?

Up Next: SPOT Devices Go the Length of the Appalachian Trail and Beyond

Saving…
SPOT Devices Go the Length of the Appalachian Trail and Beyond
Declassified: ‘Super Magnesium’ Lighter Than Titanium, Stronger Than Steel
×