Supertramp Campers is one of the manufacturers leading the charge in the booming market for slide-in truck campers, and there are plenty of good reasons why.

Supertramp Campers slide-in truck campers are remarkably lightweight. They are filled with features and conveniences not typically available in lightweight campers — features that won’t make you feel like you’re still sleeping in a tent. 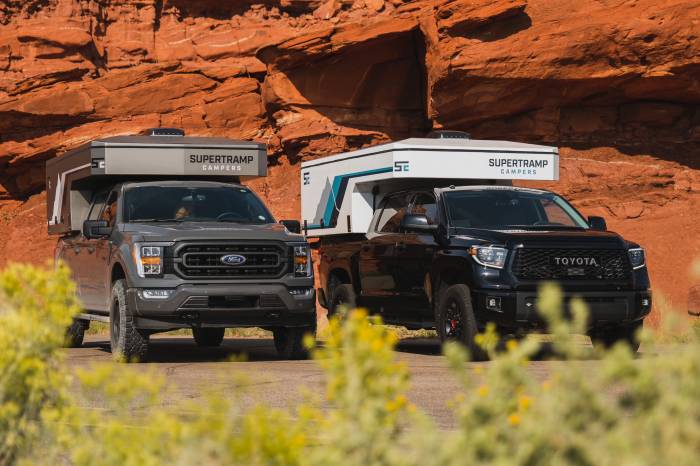 Often when you think of a slide-in truck camper, the picture that comes to mind is a large, heavy, and cumbersome mammoth of a camper that requires a heavy-duty pickup truck to handle all that weight.

The fact is that the Supertramp Campers are among the lightest on the market, weighing in at about 1,200 pounds (dry weight). And it can be easily carried on any pickup truck that features a 6-foot 6-inch bed.

Instead of a downsized “RV queen” or double bed so often found in lightweight campers, the beds inside the Supertramp Campers are a 4-inch-thick standard-queen size mattress. 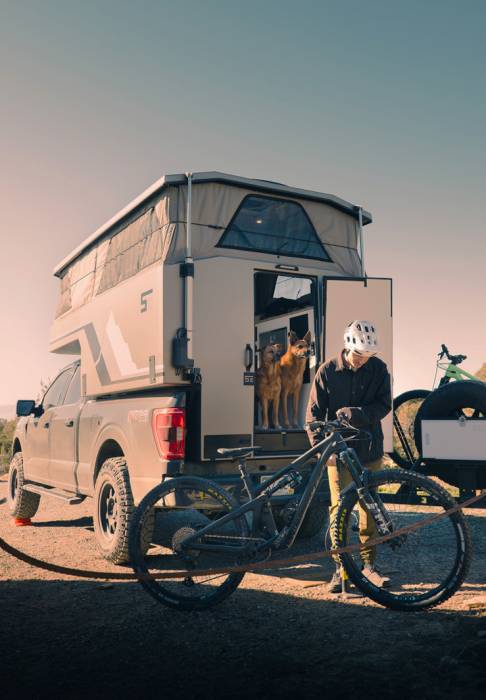 Supertramp Campers also include top-end appliances as standard equipment. The long list includes desirables such as a Truma Combi Eco heater that delivers warm air and hot water from a single unit, a 65L Isotherm fridge, an interior kitchenette with a bamboo countertop, a flush-mounted stove and marine-grade sink, and a portable cassette toilet that’s hidden away in a cabinet.

A 100Ah lithium battery and solar panels that produce 300 watts of power, two 11-pound propane tanks, and an electric lift system are all included in the Supertramp Camper base price. An interior shower with an additional 5-gallon gray-water tank is optional.

Lightweight campers are often missing one of the most important features adventurous outdoor explorers look for in a truck camper: room for storage and living space. Not so with Supertramp Campers.

Kelsey Panich, Manager of Sales and Operations at Supertramp Campers, told us, “The interior layout is designed to eliminate that ‘hallway’ feeling that you get in so many other truck campers in this size and weight category.”

The Supertramp Campers slide-in truck camper includes 34 cubic feet of storage, including under-bed storage and a large exterior rear pullout tray for your dirty items. You’ll also find two deep storage units under the L-shaped couch. The couch is large enough to fit a few friends or family after an outdoor adventure.

Features such as the pullout drawer for all your kitchen cutlery and the large food prep area make the interior feel especially user-friendly. Supertramp Campers offer spacious modern layouts and large windows that create a 360-degree view.

Each window includes a zippered insulated shade, marine-grade vinyl, and mesh. It sews all its soft goods in-house and places zippers on the back of each cushion so the cushion covers can be easily removed and washed.

The pop-up roof offers power lifts that raise the ceiling with the touch of a button, offering a 6-foot 9-inch interior standing height. A triple-layer system is used to create the pop-up portion that also offers a level of insulation that makes it a great multiseason camper.

Most of the slide-in truck campers on the market are built in what the RV industry calls “stick and tin.” This type of framing refers to the type of lumber used in many residential homes. These typical construction-style campers are then covered in metal sheeting with ordinary fiberglass batting for insulation.

The walls are 1.5-inch PET, and the roof is 0.75-inch PET. Supertramp Campers estimates an R-value of 7 based on the materials used and their thicknesses.

Panich said, “Our vacuum infusion method of creating the composite shell allows us to precisely control how much resin you put into each part or section of the shell, and that’s how we get the high quality of construction with a light overall weight of 1,200 pounds.”

Supertramp Campers also offer three Molle-panel and L-track mounting locations on the exterior. The L tracks are great for mounting Maxtrax, jerry cans, or other exterior options such as an awning and shower enclosure.

Each camper comes standard in a high-gloss paint, and 3M vinyl wraps are offered so you can complement the color of your truck. Everything from the exterior composite shell to the pop-up fabric portion is completed in-house at a manufacturing facility in Golden, Colorado.

Supertramp Campers is a relatively new manufacturer, and according to Panich, it “currently offers the Flagship LT model in the 82-inch floorplan which is perfect for the 6.5-foot pickup bed. The launch of this model has been so successful that we are going to focus on production orders of this unit, but there are other models planned in the future.”

Panich added, “We’re building this truck camper to outlast the pickup truck it rides on. The composite shell construction is designed to deliver many years of good condition and use to the customer.”

For more information and a complete list of the dozens of standard and optional features that Supertramp Campers offers, check out the company’s website.

Up Next: 2023 GMC Yukon Denali Ultimate Cranks Up the Fancy