With the installation of flat screens in five chairlift restraining bars at Winter Park Resort, the digital era has been further integrated into skiing.

If you downhill ski, you’ve encountered the restraining bar. While often ignored in North America (and mandatory in other parts of the world), skiers and boarders can use the bar for added safety while riding chair lifts.

And now that bar can give real-time information for mountain conditions.

Winter Park claims it became the first ski resort in the world to add a digital information system to its lifts last month. The system, built by Denver-based Alpine Media Technology, relays real-time information on weather, events, conditions, and more.

The chairlift screens look like tablet-style computing devices embedded in a flat restraint bar. Set up as pairs of screens (up to three pairs on a six-person lift), one screen always displays a trail map, while the other rotates through real-time information at 30-second intervals.

The screens provide information such as:

According to both Winter Park and Alpine Media Technology, this is the first device of its kind. 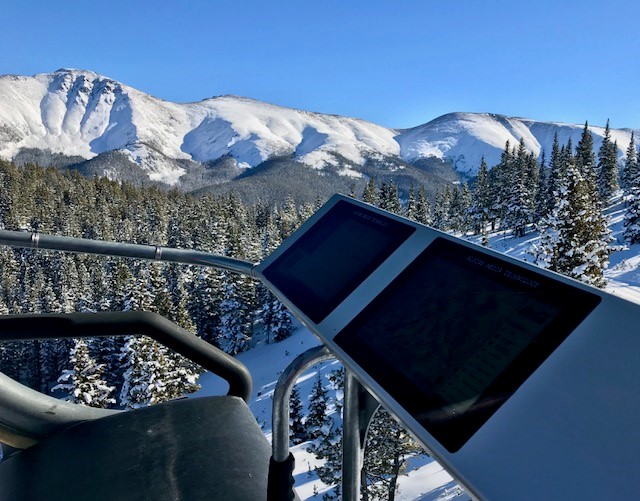 Hurlbert offered stopped lifts as an example of when instant communication with riders would be helpful. The system even updates with live traffic reports, train departure delays, or terrain openings.

In its pilot program this year, the system is running on just five chairs. But Alpine Media Technology said it expected to expand rapidly.

“We are actively speaking with more resorts around the country. We’re extremely confident that next year we’ll be in several resorts, maybe as many as 10,” said Alpine Media Technology COO Gerrit VandeKemp.

Alpine Media Techology: How It Works

To function in an alpine environment, the system must withstand brutal cold, rain, snow, and impacts.

“We’ve been impressed with how they’ve held up,” Hurlbert said, claiming the screens could withstand the elements and abuse by skiers (and vandals) hopping on the lift all day.

While the beta test screens run on batteries, a full installation will use charging rails at lift bullwheels coupled with ultra-capacitors to provide electricity to run the devices.

The screens will use wifi and update nearly instantly as a mesh network. In the beta test, screens only update as they pass a wifi station at the top of the mountain. They also serve as locations to display advertisements, with ads running during beta testing.

Hurlbert said the screens provide information when needed but are mute and “unobtrusive.”

“We thought if we had negative feedback, it would be on that lift,” VandeKemp said. “The reception so far has been exceptional.”

With testing already through a partial season, it seems likely skiers will become familiar with digital screens soon.

“You won’t just see more of it at Winter Park, I think it’s something you’ll see more of all around the world,” Hurlbert said.

Up Next: Winter Warrior: Tackling Icy Streets On Recumbent TerraTrike