The defunct electric vehicle manufacturer Fisker is working on resurrecting itself from the ashes of the original Karma disaster. This is what we know about three new vehicles.

The brand Fisker introduced the Karma in 2012. The luxurious extended-range electric vehicle had beautiful looks and solid performance when it hit the market. But the brand halted production that same year when its sole battery supplier filed for bankruptcy after two recalls. It offloaded the Karma brand, which now stands alone as a subsidiary of Chinese company Wanxiang.

But Fisker looks to once again blaze its own path. It plans to launch its first new vehicle, a sub-$40,000 SUV, in 2021. Henrik Fisker, the company’s founder and lead designer, just announced two additional electric vehicle models on the same platform as the forthcoming SUV.

“ALL automotive segments have to be electrified! After our Fisker electric SUV, we have already decided on our next 2 EV’s on the same platform! #fisker #EVs #ElectricVehicle #Automotive #sustainability #cool #FutureTech #Trending,” Henrik Fisker tweeted.

Although he didn’t give specifics, a teaser image clearly shows the rear of a vehicle with a tailgate and canopy. We can only extrapolate that a truck or removable top SUV are the next Fisker vehicles on the horizon.

With Tesla, Rivian, and Bollinger all working on a similar electric vehicle, Fisker has a lot of catching up to do. All three of those big competitors have secured financing and established manufacturing facilities, things Fisker is still working on. The race to bring the first full-electric pickup to market is on!

Henrik Fisker is one of the most prolific and successful automotive designers of all time. He penned such cars as the Aston Martin DB9, BMW Z8, and the ill-fated Fisker Karma.

The successes and one big failure are an overall impressive resume, but the new Fisker Inc. has shown little in the way of gaining the big financing needed to manufacture automobiles. In late 2019, it hasn’t even secured a factory, which doesn’t bode well for a 2021 vehicle launch. 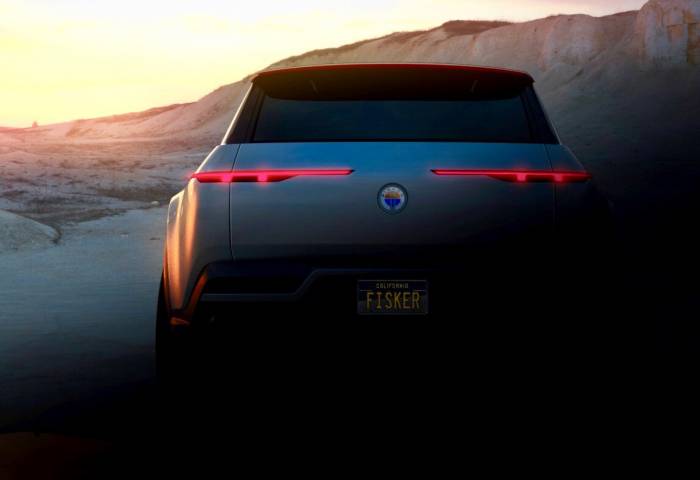 The first vehicle it plans to bring to market is a midsize sub-$40,000 all-electric SUV. The vehicle will squarely compete against Tesla’s forthcoming $39,000 Model Y. While little is known about it so far, there have been a few leaked images and tweets of information along the way. A retractable solar roof, recycled material interior, and D-pillar side turn-signal indicator lights are the only real bits of info out there.

We also know Fisker plans to sell directly to consumers with franchised service centers. That’s a tough business model in the automotive landscape, especially in America. Tesla has struggled with a similar sales and distribution model, which the brand is continually refining.

Will we ever see a new Fisker vehicle roll off an assembly line? Only time will tell, but we hope so, as competition leads to innovation, economies of scale, and better prices for consumers.

Up Next: Fat Tire’s Celebration of Public Land Continues With Wheeler and Biker