No engine, no lights, unlimited MPGs — this limited-edition Harley-Davidson pays homage to the Wisconsin brand’s short-lived foray into pedal power 100 years ago.

What candy cigarettes are to Camels, Harley-Davidson thought its bicycles would be to the iconic, throaty hogs. It’s true: In 1917, the Wisconsin-based motorcycle manufacturer launched a line of bicycles in hopes of recruiting youths into its edgy brand.

Though the campaign proved short-lived — Harley-Davidson halted production by 1923 — those vintage pedal cruisers recently resurfaced into the mainstream. Last month, Harley-Davidson announced it will commission Chicago’s Heritage Bicycles to build 10 replicas of it century-old bicycle.

According to Milwaukee’s Journal-Sentinel, the bike harkens back to Harley’s 7-17 Standard Model, originally manufactured in 1917. The first hand-built replica greeted the public on June 21 during the Harley-Davidson Museum’s weekly “Bike Night.” 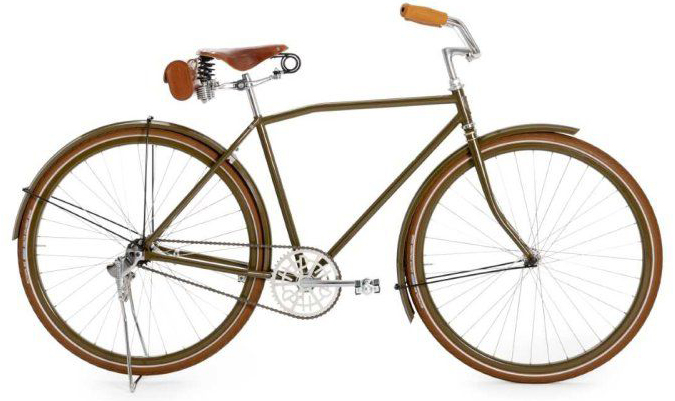 “Harley asked us to replicate the original as closely as possible,” Heritage owner Mike Salvatore said in a statement. “We were not going to just pull a frame out of the basement and paint it green.”

Heritage did, in fact, paint it green (olive, to be precise). But the Chicago builder-retailer meticulously crafted almost every detail of the original bicycle. From its custom (jumbo) chainring to its hand-painted pinstripes to its comically overbuilt suspension saddle, the replica 7-17 appears fit for a museum.

“The overall feeling of the bike is hard to describe,” Heritage general manager Derek Lewis told Bicycling. “The fork is intense, it’s a triple plate-style fork that was around in the teens, ’20s, and ’30s, and [on] some post-war bikes.”

Some details, however, had to be modernized for the sake of comfort and longevity. According to Bicycling, Heritage replaced the original 7-17’s heavy steel rims with aluminum. And it added sealed front hubs and a Brooks B135 saddle.

If you’re a Harley enthusiast or vintage bike lover, you can try to nab a $4,200 limited-edition build this summer. Contact the Harley-Davidson Museum to be put on the waitlist!

Up Next: No Wheels: Meet the Camper That Rides on Your Hitch