Hawke Optics isn’t a well-known brand here in the U.S. But that may change as this British company continues to add serviceable and affordable optics choices for hunters and other outdoor enthusiasts.

I took several Hawke offerings along on a five-week road trip from Alaska and the Yukon through British Columbia, Montana, and Wyoming. The Hawke glass I used the most was the Endurance ED Spotting Scope, one of the brand’s higher-level scope offerings with a list price of $700. As you can tell from that price point, Hawke is a value-conscious glassmaker.

Hawke Optics is based in Suffolk, England, but it opened an office in Fort Wayne, Ind., in 2007. As its line of optics grew, so did its U.S. sales. The reason Hawke has continued to grow seems to be that it offers quality glass for hundreds of dollars whereas offerings from other manufacturers start in the thousands. 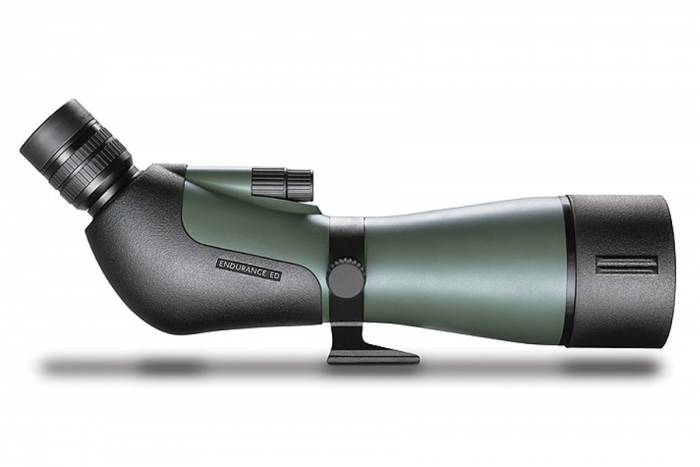 The scope I tested has two things I believe all good spotting scopes should have: extra-low dispersion (ED) glass and a large objective (front) lens. I won’t even think of running optics without ED glass because chromatic aberration is a major problem. It’s a real headache-producer after looking through a scope for several hours while glassing for, say, Stone’s sheep in northern British Columbia. ED glass does cost more to produce, but I’m always happy to shell out the extra cash for it.

Because a 20-60x85mm scope is big by its very design, portability is a factor. During the five-week test period, I was constantly climbing, hummock-hopping, side-hilling, and scree slipping. Good glass is unavoidably heavy. And you really feel it after 7 or 8 miles and 2,500 vertical feet.

At just under 4 pounds, this scope was noticeably heavy after a day of climbing. I’ve used a compact Leupold 15-30x50mm scope, weighing less than 2 pounds, for similar outings in the past. While the weight reduction of the compact was nice, having the big 85mm objective lens makes a huge difference in the changing light conditions that always exist in the mountains. That will always be a trade-off you have to consider: Big and bright, or small and light?

Besides the coated, nitrogen-filled, fog-free ED glass, the scope has a twist-up eyecup, pull-out sun shape on the front end, full-body rotation on the mount ring, a weather cover, lens caps (more about those in a bit), and, most importantly in my world, dual-focus knobs.

Having the ability to microfocus with the dual knobs makes a world of difference, especially when heat distortion, rain, and fog make standard focusing tricky. I just won’t ever buy another spotting scope without dual knobs. 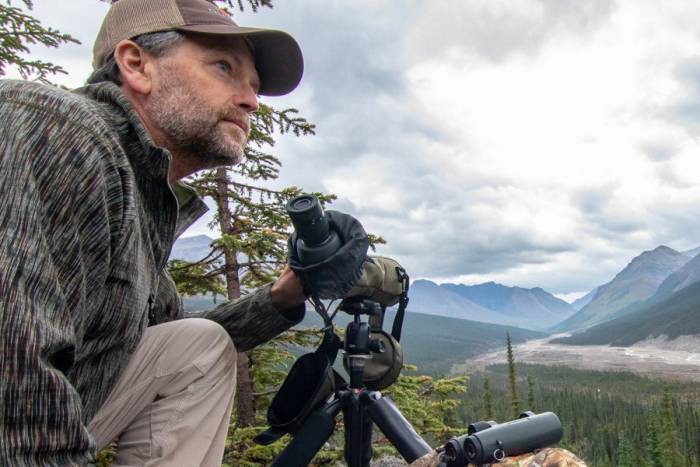 What didn’t work for me with this scope were the flaps on the weather cover. At 50- or 60-power, any movement at all will drive you nuts. And the flaps were always in the way, blocking the focusing knobs or blowing around in the wind. This makes glassing a distant object much more difficult, as stability is key with big scopes. So a solid rest in the form of a tripod — or at least a heavy pack to rest the scope on — is a must.

Hawke needs to find a better way to secure those flaps. The small hook-and-loop patches it uses now ain’t cutting it. And after a couple of frustrating experiences, I just took the cover off and used the scope naked.

Additionally, the provided lens cap seems designed to self-eject. I don’t think the front cap ever stayed on for more than a minute or two. And I spent an awful lot of time searching for it in the talus, the tundra, and the floor of my truck. But those are minor considerations in the grand scheme of things. What matters most is the picture you see when looking through the scope — and the picture is pretty damn good for a $700 scope. 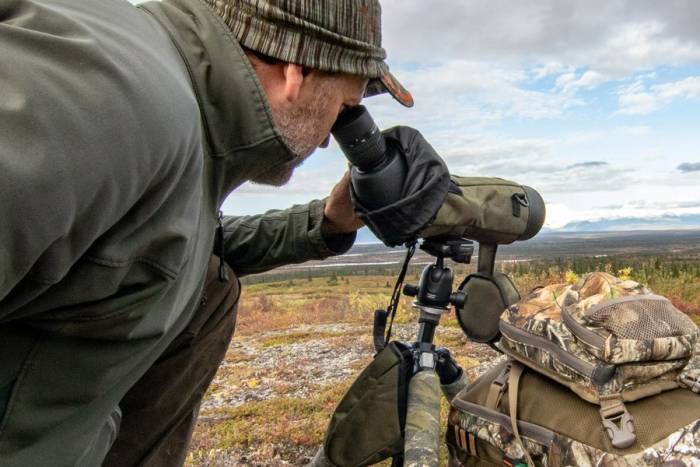 Two final notes: As I mentioned earlier, a solid rest is critical with long scopes like this. I’ve heard people complain about the performance of high-end scopes too. However, it often turns out that they were putting a $3,000 scope on a $20 tripod. Spend the money for a solid tripod, preferably carbon fiber to save weight, or prepare for disappointment.

Also, spotting scope companies offer straight or angled eyepieces as options. The scope I tested had an angled eyepiece, which tends to make for a more comfortable viewing experience. That said, it’s much easier to find your target quickly with a straight eyepiece.

The choice is subjective. I don’t know exactly why, but looking down into the scope feels more natural to me. So I prefer angled, especially when the manufacturer also allows you to rotate the scope on its base. This scope does just that.

Don’t get me wrong, the glass quality isn’t up there with Leica, Swarovski, or Zeiss. You’ll notice the difference most at dawn and dusk or when trying to see through a nasty ground fog. But with those companies, you’re going to pay three or four times as much for the same features.

With this in mind, it’s clear that Hawke knows where it fits in the optics world. And I’m comfortable saying the brand is a good choice when affordability is a consideration.

Up Next: Worth the Splurge: 5 Pieces From Sitka Gear’s 25% Off Sale

Saving…
Worth the Splurge: 5 Pieces From Sitka Gear’s 25% Off Sale
onX Hunt Helps You Find Uncharted Fishing Waters Too
×