The GiantMouse ACE Nazca Knife offers good usability at a nice price point, but beware of its locking mechanism.

In the world of gear, there are a few designers that seem to speak my language. Among these is the team of Jesper Voxnaes and Jens Anso, the founders of GiantMouse Knives. So, when they came calling with the offer to try out their new ACE Nazca ($225), it seemed like a match made in heaven.

What’s with the ACE part? In short, it’s their budgetary line. Whereas the official GiantMouse versions have limited runs, the ACE models have a wider availability and slightly less-premium materials. But with Bestech handling the manufacturing duties, the mass-market versions feel anything but low-end.

Adding to the intrigue is the knife’s tongue-in-cheek story. According to GiantMouse, the blade was named “in homage to the famous Nazca Lines found in the desert of southern Peru. Were these giant geoglyphs created by extraterrestrial visitors? The world may never know.”

While I didn’t encounter any aliens during its visit (that I know of), the Nazca’s stay was certainly marked by some tense and unusual occurrences.

In short: Once deployed, the GiantMouse ACE Nazca offers backyard utility that’s almost out of this world. But its tense locking mechanism could be too much for casual users, despite the excellent fit and finish of its materials.

They say that first impressions are important. And boy, did I bungle this one. If you look closely at the photos here, you’ll notice that my test model looks slightly different than the maker’s images. Can’t figure it out? Here’s a hint.

That’s right. Less than 3 minutes after I pulled this $225 knife from its packaging, I dropped it on a concrete floor. And later, when I attempted to straighten the tip, it snapped off instead.

Now, I want to be absolutely clear about this — this had nothing to do with the manufacturers. For those first few minutes, its fit and finish were clean and perfect. This mishap is 100% the fault of me and my butterfingers. We’ll talk a little more about fingers later on, but for now here are the specs, not counting the millimeters I lost.

As you can see from the measurements and size comparison, the Nazca is by no means a small knife. While notably shorter than the Spyderco Paramilitary 2, its handle is several millimeters wider. This results in a pleasing, palm-filling grip, with an interesting texture on its green canvas. The knife can be purchased with titanium scales for $60 more, but I generally prefer the warmth of micarta.

The satin M390 blade features a modified clip point (and oof, did I modify it). The edge here is all-belly, sloping gracefully across its 3.15 inches. And speaking of belly, the stock here is rather thick — 0.138 inches, to be precise.

The blade is paired with a ball-bearing pivot and held in place by something called a cross-bar lock. If you’ve ever owned a Benchmade, you’re already familiar with this tech.

It’s essentially the same thing as its Axis lock, with a pair of omega springs that push a tube of steel into place, keeping the knife from closing. To release, you draw the barbell-shaped mechanism toward the rear of the knife.

Watch Out for the Learning Curve

Before putting it through my cut tests, I spent a few hours playing with the Nazca’s mechanism. At first, I thought it was my own embarrassment that made this experience feel … well, rather dangerous. But the more I fiddled, the warier I became.

Once it’s deployed, the knife feels steady and safe. But getting the blade into place requires a bit of caution. The cross-bar lock on my tester was rather firm, which makes sense given the weight it’s controlling.

Unfortunately, this required me to push harder than I’d like on the thumb studs. And once you move the blade past a certain point, it pops out almost as if it’s partially assisted. This results in the meat of your thumb resting uncomfortably close to the broad curve of the edge, right as you’re overcoming the spring tension.

Now, I managed not to cut myself. And this could be a personal hangup, as I’ve spoken with other reviewers who liked the mechanism. For my own comfort, I generally deployed the Nazca by pulling on the cross-bar, flicking my wrist, and releasing the springs once the blade snapped into place. Closing operated on the same principle — but in reverse.

This was effective, but be careful to make sure that the bar has engaged. If you release it too late or too soon, the blade may still be mobile.

The ACE in Use 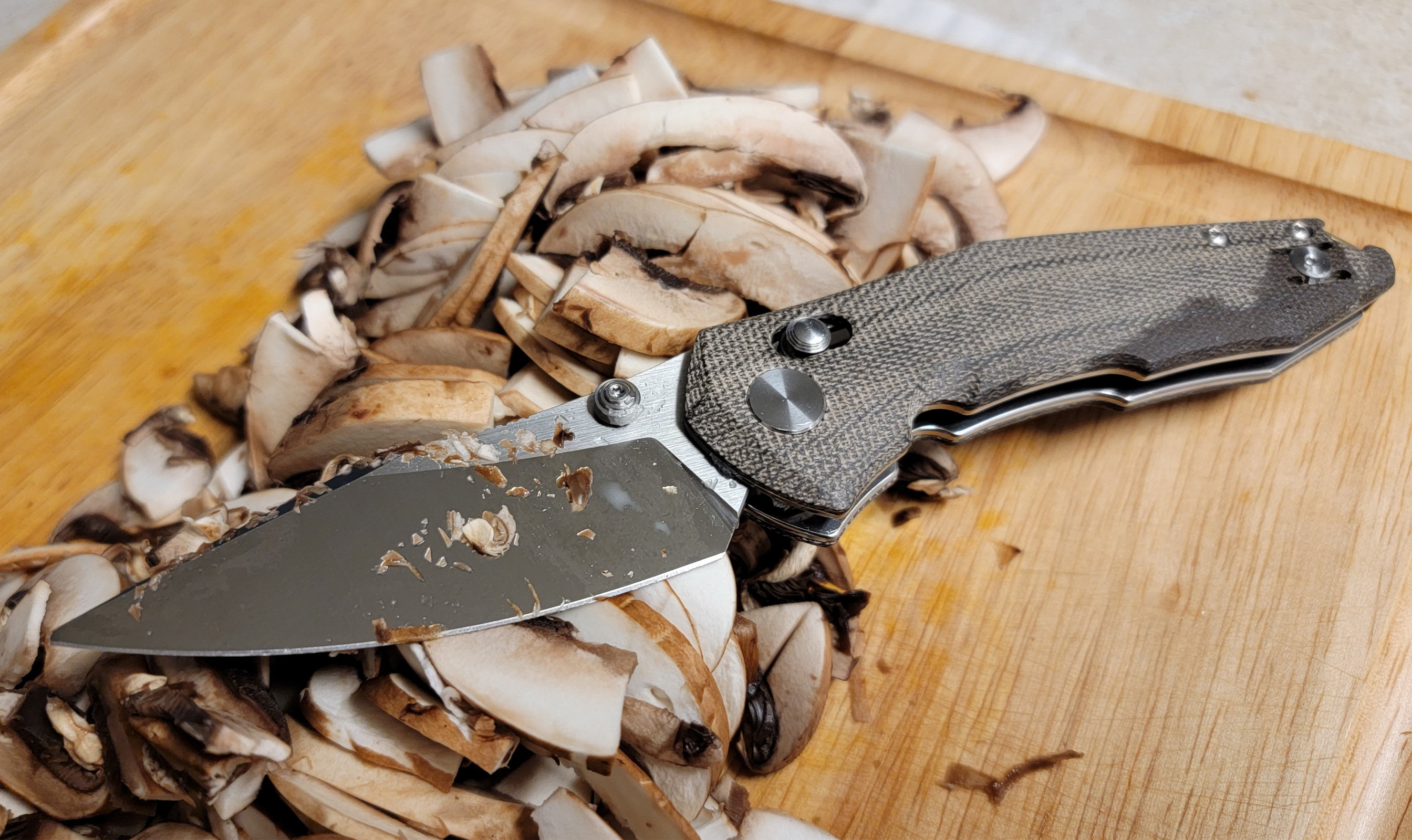 Now that I’ve spent a few paragraphs instilling the need for caution, let’s talk about how the Nazca actually performs.

As a tool for supper prep, the knife didn’t exactly impress. The girth of its blade makes it less of a slicer and more of a splitter, despite the tallness of its edge. Carrots, onions, and parsnips proved to be something of a chore, though it was effective at chopping mushrooms.

But once I got the Nazca into a more practical role, it showed itself to be every inch an ACE. Its curved belly was hungry for everything that wasn’t for human consumption. Rope, packaging, and especially cardboard melted before its edge. And thanks to the staying power of M390, it remained keen through its tests.

I was doubly impressed by the comfort of its grip. The micarta handles are almost as wide as something you’d find on a fixed blade, allowing you to exert pressure throughout the cutting stroke.

If I had another quibble, it would be with the jimping up top. While GiantMouse did a good job rounding out the edges, I would have liked to see another, smaller patch above the thumb studs.

If this seemed like an overly cautious review, then good. Because despite my qualms about the cross-bar lock, the Nazca earns a cautious recommendation.

Its superb handle design, material quality, and overall fit and finish are worthy of a knife costing just north of $200. Its designers and makers have a pedigree to uphold and, from a manufacturing standpoint, they managed to do just that.

But with this one, you need to know what you’re getting into. Even more so than the CRKT Attaboy, this isn’t a knife I would hand to a friend.

The extra attention required to open and close its blade is a factor that absolutely demands your respect. As good as the knife is once opened, it’s something to consider before putting this ACE in your deck.

Up Next: A Pocket Knife for Blade Nerds: CRKT Attaboy Review

Saving…
A Pocket Knife for Blade Nerds: CRKT Attaboy Review
Reviewing a Classic: Does the Opinel No. 7 Folding Knife Still Make the Cut?
×