It looks like a classic timepiece, but the Omata One is powered by satellites and advanced electronics. After a month of testing, I can’t decide if it’s a glimpse at cycling’s future or a welcome return to simpler days.

There are two types of bike computer users. Some analyze as many metrics as possible in real time. Others check stats after the ride, paying attention to a few central figures.

The Omata One, an analog bike computer, caters to the latter. Released in spring 2018, the Omata One shows speed, distance, ascent, time, and battery level on a beautiful round display. It costs $550 and is available in mph and kph versions.

I’m not a purist, but I don’t like digital distractions. The Omata One wasn’t made for data junkies but for people like me who enjoy analog riding experiences. 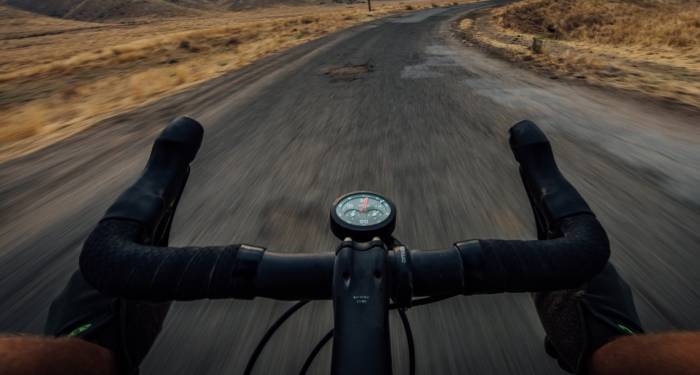 Created by Rhys Newman and Julian Bleecker, the One represents a radical departure from their previous design projects. While they both worked for a subsidiary of Nokia, Newman suggested they design a cycling computer modeled after a traditional speedometer. For two guys in an industry dominated by touchscreens, it was quite a leap.

Although the Omata One is not the first analog bike computer, it’s the most advanced. Buried beneath the dials and needles hides a dense package of electronics including a three-axis accelerometer, barometric pressure sensor, and thermometer.

Wireless signal protocols include ANT+ and Bluetooth for easy data transfers to mobile devices and computers.

To measure speed, distance, and elevation, it receives signals from GPS and GLONASS satellites. Accuracy is further boosted by the Japanese QZSS navigation system, China’s BeiDou network, and SBAS ground stations. While riding in dense mountain forests, the One never fails to acquire a signal quickly and pinpoint my location within a few feet.

For an unassuming analog bike computer, Omata sure packed a lot of tech inside. 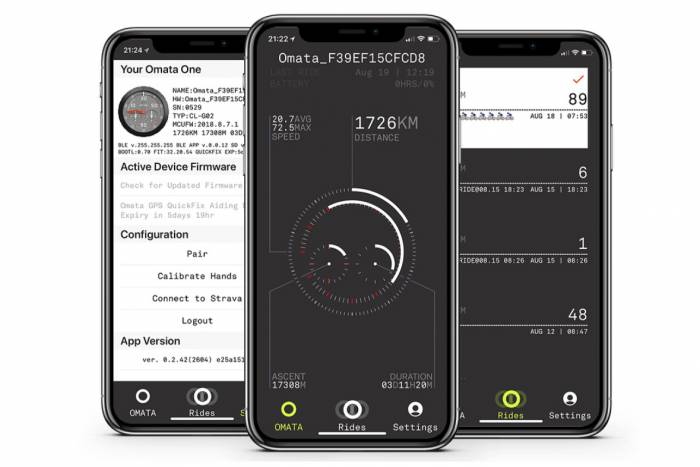 How to Use the Omata One

Bleecker’s fondness for cameras and other precision instruments is evident in the clean user interface.

There are no rubberized buttons or multicolored LEDs. The bezel rotates to select ride, stop, and connect settings. It also doesn’t blink, beep, or buzz. Modern electronics are needy little things always vying for our attention. 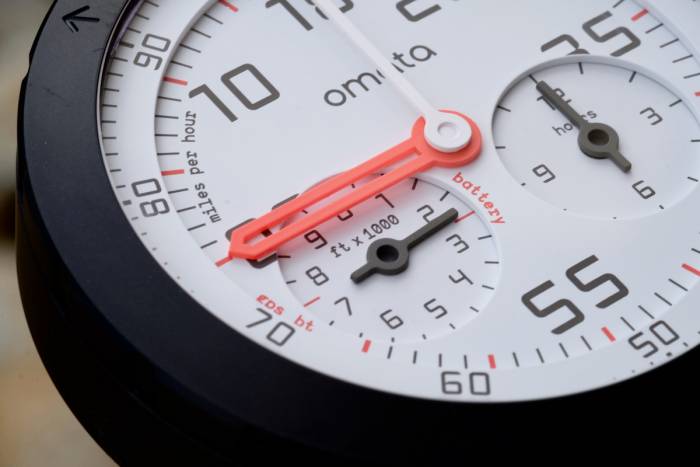 In that regard, the One is as unobtrusive as a pocket watch. But, oddly enough, it doesn’t tell time.

One Antidote for Information Overload

The paucity of features will likely earn the One as many fans as detractors. Like many avid riders, I’ve evolved beyond a need to quantify my meager physical talents. Rather than evaluate my aerobic efficiency or check my heart rate, these days I just like to pedal.

The analog layout allows me to see how far I’ve gone or how fast I’m going with a quick glance. The only other metrics include elapsed time and accumulative elevation gain.

Using the Omata One is not far from reverting to film photography or dialing a rotary phone. I had to retrain my brain to forget about electronic cadence digits, power readings, and turn-by-turn directions. But the more I use the One, the less those things matter.

Since I spend most of my miles in the dirt, I was concerned with durability. Rhys reassured me of the unit’s stout build. The IPX5 waterproof rating won’t save it from a complete dunk, but it’s more than sufficient to survive a heavy rain. 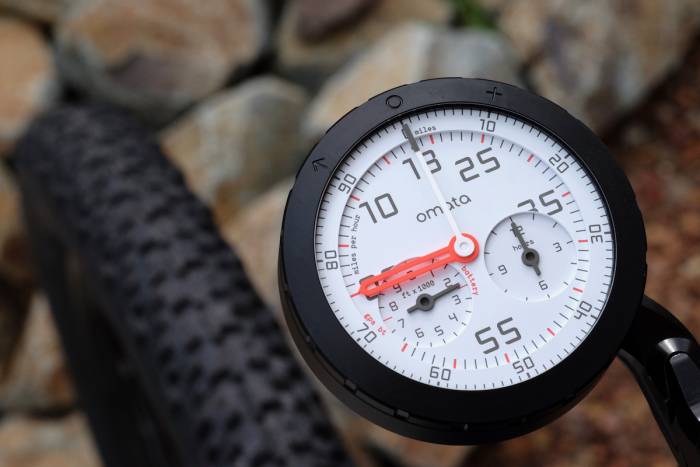 With the machined aluminum body attached to the custom K-Force bar mount, it feels securely locked in place. That said, I wish it had a small loop for a lanyard.

Like most analog instruments, you don’t read the numbers but the position of the hands. And there’s no alternative: The tiny font is impossible to read, even with eagle-eye vision.

It took a few rides to settle into the layout and scale of the numbers because they defy any familiar arrangement. The 12 o’clock position indicates zero miles traveled and 18 mph.

Bleecker has a strong belief in 18 mph as the magic human-powered number. The idea is to encourage riders into the sweet spot of velocity by maintaining the needle in a straightforward position.

But that theory has inherent limitations. I like to ride singletrack where speeds are highly variable and seldom reach 15 mph.

To squeeze the most functionality out of four mechanical hands, three of them perform double duty. When turned on, the time-elapsed dial momentarily indicates the number of satellite signals received. And when turned off, the elevation indicator quickly moves to display battery charge.

Lots of Hits and a Few Misses

Overall, the quality of the design and construction is superb. Seiko manufactured the mechanical movements, and final assembly takes place in Finland. Given my riding preferences, I don’t need to look at my computer. But I can’t take my eyes off the Omata One. It’s a thing of beauty.

The 17-hour battery life provides more than enough juice for epic rides or to squeeze in several quickies between charges. There are glaring technological missteps like the iOS-only mobile app. Rhys confirmed the Android app is on the way. And I still can’t believe such a handsome instrument, designed to evoke the aesthetics of a dive watch, doesn’t tell time.

Who Needs This ‘One’?

If you like to record basic ride stats, you can easily do so with a mobile phone stuck in a jersey pocket. A cheap bike computer with a customizable screen displays more information than the One.

And here comes the $550 question: Who is the target customer? 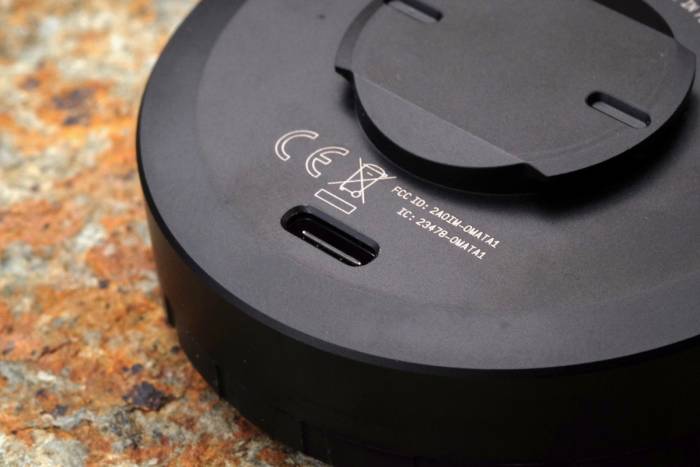 The Omata buyer is not driven by practicality. Not to say it isn’t a useful tool, but I can’t dismiss the many limitations intentionally baked into the design.

For riders that use ride information to fine-tune their fitness, it just won’t do. But if you want to simplify your ride with a gorgeous piece of retro-inspired technology, the Omata is the one for you.

The more I use the Omata One, the more I love it. But there are times when I wish it did a few more tricks, or just one — like tell time. Did I mention that?

Up Next: Yeti SB130 Review: Your Other Bikes Will Gather Dust