Acid wash your spacesuits and lace up your Chuck Taylor moon boots because the hipsters are heading to outer space! Well, the stratosphere at least.

A motley collection of Minneapolis bike messengers and racers, affectionately known as Team Sh!tgoose, just paved the way to crash for a few nights on the International Space Station’s couch by successfully putting a taco and a can of PBR into the stratosphere.

Best of all, they got it all on tape (watch the hilarious video below).

“About two years ago, I just drunkenly had the idea with some friends to put something into space,” says Ben Wallace, mission flight director and general mad scientist behind the endeavor. “I’ve always wanted to put something in space – I’m a total space nut!”

Thickset and burly, Wallace’s disposition is best described as giddily optimistic. An IT securities professional by trade, he is trained to think of all the ways bad things could happen and then prevent them. If anyone were to follow through on a hairbrained scheme, it’s him.

“He’s a super energetic nice guy,” affirms Craig Drehmel, field marketing representative for Pabst. “He’s always down to do something stupid, like most bike people are.” Drehmel convinced the PBR brass that co-sponsoring Wallace’s childhood dream was a “not-terrible” idea. Then, with sponsorship and manpower from local bike-delivery restaurant Taco Cat, Project Stratosbeer was born.

Watching the video, you might think that achieving low-earth orbit in a scientific launch vehicle takes little more than a backyard fire pit, a stupid idea, and a handful of tatted-up, hardcore friends that will light a fuse first and ask “Will this blow up my hand?” later. But the movie, which depicts comically absurd attempts at bottle-rocketing a can of PBR into the sky, belies the very real planning, technology, and relentless number-crunching that made this drunken idea a reality. 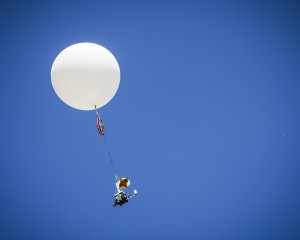 “Math is the magical language of the universe,” marvels Wallace, who ran trajectory and launch projections for months to find the perfect three-day window in which to send off the payload. In September of last year, as summer drew to a close, the skies over southern Minnesota were forecast to remain calm and clear long enough for Project Stratosbeer to take its shot.

The FAA had been notified that in Lakeville, MN, a “high-altitude photography rig” was being launched – “which was not technically untrue,” shrugs Wallace innocently. That rig, which was plastered with both warnings to NOT OPEN! and reassurances that CONTENTS ARE NOT DANGEROUS, was a hodgepodge of highly technical gear and ingeniously repurposed items. It contained everything from a professional weather balloon, to GoPro cameras, to GPS tracers, to hand warmers, and the desiccant packs from a couple of bags of beef jerky. (You can check out the entire setup below).

The day had to be perfect; if the winds were wrong the rig could be carried off course and drift into the urban heat bubble over the Twin Cities. That would have wildly altered its trajectory, making it merely a really-high PBR instead of a PBR in space, and have risked also becoming a shot-down-by-homeland-security PBR (which also would have been a first for the brand).

Even with a perfect day, any number of things that had to go just right could have gone catastrophically wrong. The GPS units, which by law have to cease transmitting above 80,000 feet lest they be mistaken for an inter-continental ballistic missile, might not reactivate upon re-entry. This would leave the team virtually clueless as to the rig’s final whereabouts. Even if the GPS didn’t malfunction, the vehicle could land in the street, or on a building, or in the river.

“What if a plane hit it or an eagle grabbed it?” wondered Wallace. “I was terrified, terrified! What if the parachute doesn’t open and it comes shooting back to earth at 20 meters per second instead of six? I thought a lot about how I could do this without going to prison.”

Any of those things could have happened, but they didn’t. “It went perfect – totally without a hitch,” he said smiling. “In fact, we had to invent hitches for the video.”

The achievement, a first for PBR and Taco Cat, was not just a publicity stunt. The launch vehicle also carried letters of welcome written by Ben’s stepdaughter Morgan and her friend Liberty for any alien passersby, as well as a guitar pick owned by Ben Erickson, a beloved member of the Minneapolis cycling community who passed away unexpectedly last year.

After touchdown and recovery, all that was left for mission completion was to shotgun the PBR, which was essentially atomized microfoam, and scarf the taco, which had frozen. Maybe not the ideal pairing for any of us, but as Wallace can attest, “They were the sweet taste of success.”

Up Next: Stanley Percolator: Coffee The Old Fashioned Way