Salewa offers a solid climber at a reasonable price point with its Raven 2 GTX. Out of the box and onto the mountain, we brought the Ravens out for a spin up (and down) the Grand Teton. 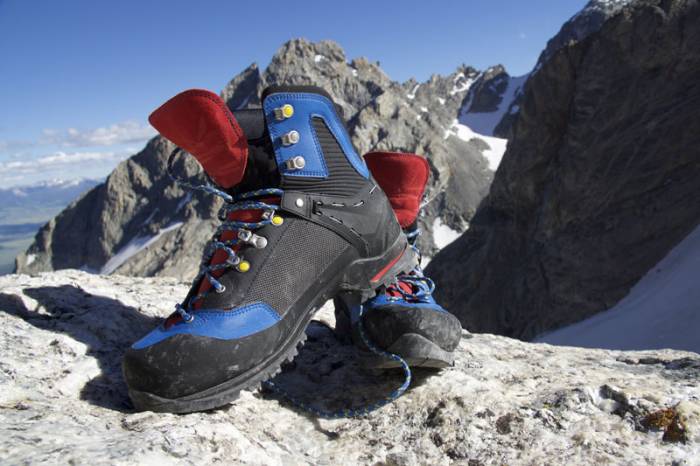 The Tetons in early summer can be a mixed bag. Spring snow is melting rapidly, exposing the spire’s iconic granite, laced with ribbons of ice. The mountain begs a boot that offers enough stability to huff in heavy loads on dry scree, support a crampon on ice, keep your feet dry in rain, and warm your toes while on belay. It’s a tall order.

Invited by Mountain Hardwear to play for a weekend on the Grand Teton with Jackson Hole Mountain Guides (JHMG), I knew I’d need a pair of boots that would keep up.

Gear Overhaul: Mountain Hardwear Doubles Down on Climbing for 2019

Mountain Hardwear hits the reset button for 2019, harking back to its alpine roots. Nothing on its equipment line goes untouched for the reboot. We joined the brand on the Grand Teton to get the story first.
Read more…

Is Salewa new to you? It’s been around for a while. Though mostly known in Europe, the Bolzano, Italy-based brand was founded in 1935 and has built a name forging top-shelf crampons.

In 2005, Salewa launched its footwear line. Rooted in alpinism, its kicks are mountain centric and range from the ultra trail to mountaineering.

Salewa named its boot line after avian spirit animals. The Ravens sit in the middle between the brand’s aggressive, lightweight climber (the Rapace) and its altitude cruiser (the Vultur). Priced at $330 (but can be found as low as $180), the Raven is a well-priced mountaineering boot, running about $50 less than comparable boots from other brands.

The Raven layers mixed materials in the uppers. Suede and abrasion-resistant “microfiber” (though it looks more like a hearty ballistic fabric) are wrapped in a full-rubber rand.

This combination provides a palette of support and toe-bashing bumpers in a relatively lightweight package (my size 10 weighed 1 pound 10 ounces).

A rubberized exoskeleton laced with foxing cables connects the sole to the laces. As you cinch the laces over the instep, the exoskeleton wraps around the heel to pull the foot back into the cup of the boot. The mechanism really reduces heel slip. Out of all my boots, I experience the least heel slip wearing the Ravens.

The laces run over an overlapping tongue, mimicking a climbing shoe, and claim to provide a precise fit over the foot. The gusseted tongue is no fuss and remained aligned over the foot and under the laces.

Also, the boot’s heel welts can take a crampon’s heel lever. But the boots lack a toe welt to accept “automatic”-style crampons. So you’ll want to look for a strap-on or hybrid crampon to pair with the Raven.

I found the soft (and lower-than-usual) ankle cuff provided more generous forward flex than others, like La Sportiva’s Trango Cube. Paired with a reasonable rocker and above-average toe flex, it’s a comfortable boot for long approaches.

The toe box is wider than my Trango Cubes, but the laces cinch down tight and stay put, making it a generally more comfortable fit. And the give in the toe box didn’t leave me wishing for more stiffness while climbing the upper Exum in crampons.

The boots are reported to run small. I sized up to a 10 (from my 9.5 street) to accommodate my thick socks for spring conditions and wasn’t disappointed.

Rock climbing in mountain boots can rattle the core of a sport climber. And I saw it happen on the Grand. The Raven’s toe has a bit of a point to it, tucking into cracks and edging over flakes, which gave me comfort while scrambling up the exposed 5.4 rock route.

Finally, Salewa boasts the boot carries a “blister-free guarantee.” That’s some strong baritone from the corporate office in Italy. I literally took the boots out of the box, packed them up, and laced them up on the mountain.

I took zero time walking around the house or local trails. And I had zero blisters.

Should You Buy the Salewa Raven 2?

Skip this model if you’re looking for a weekend hiker. While it “walks” very well for a mountain boot, the stiff three-quarter shank shines on alpine climbs with mixed terrain. But I’d personally want something lighter for general hiking.

Looking for a winter boot — or something to get you up Rainier in spring? While the boot does have a reasonable amount of insulation, I’d still reach for something plusher while traveling for extended periods on snow.

But if you’re in the market for a midvolume spring/summer boot to take to the Tetons, lower Cascades, or classic Alps, the Ravens might just be the ticket. Its out-of-the-box comfort, warmth, and rock-ready build make it a solid choice for alpine climbs.

Up Next: Stretching Beyond Leather: Danner Launches EnduroWeave Boot