Andrzej Bargiel plans to climb and descend Mount Everest this fall without removing his skis.

In an interview published in Polish, the renowned mountaineer told sponsor Red Bull that he will make the attempt in autumn to avoid overcrowding.

Bargiel made waves in 2018 when he became the first person to ski down K2. He accomplished the elusive goal without supplemental oxygen, launching himself into a sphere of pinnacle mountaineers. For his remarkable solo ascent and descent, National Geographic named Bargiel an Explorer of the Year in 2019. Check out the incredible video of his feat below.

Now, he’s gearing up for Mount Everest and capturing the world’s attention again.

Bargiel has revealed only a few details about his upcoming climb and descent. And given a complete lack of Polish comprehension, I’m hamstrung by reading a translated version (thanks, Google!).

But the gist is clear. Bargiel will travel to Everest this fall and decide which route to climb based on snow conditions and other factors on the ground.

“I need to assess what the slopes look like, what the snow conditions will be, and whether they will be stable. I have some ideas,” he said. 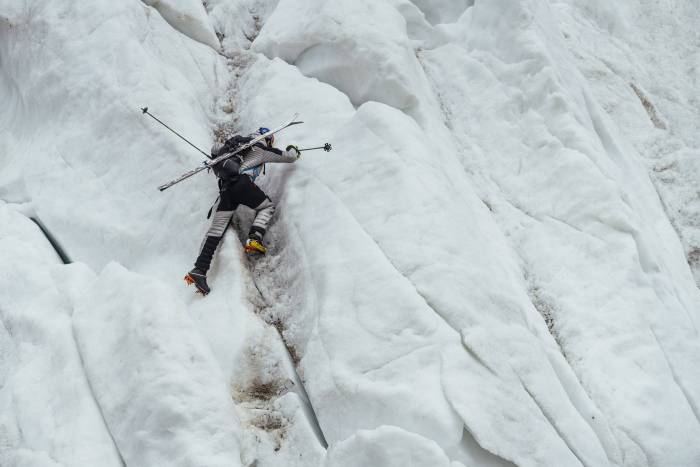 And according to the interview, he will attempt the world’s highest mountain “without unfastening the skis and no additional oxygen, which has never been done before.”

That could be a lost-in-translation kind of comment. It sounds like Bargiel plans to climb Everest, then descend from top to bottom without removing his skis. His success on K2 certainly proved he has the chops.

Although Slovenia’s Davo Karničar skied all of Everest in 2000, he did so with supplemental oxygen. If Bargiel repeats that feat without anything besides his own lungs, he will make history.

He will likely create a solid media production around the climb. He hints at the production in his interview.

“We have devices that we have prepared, improved, and reworked. These are mainly drones and some movie stuff that must be more practical than before. We learn this practicality so as not to base filming on large cameras, which no one can pull in any way to produce film materials at high altitude,” he said.

Bargiel plans to climb at the end of September. It should be an epic undertaking worth following. Check out his full interview (in Polish) here.

Up Next: Take a Break With This Killer Timelapse of the French Alps