SOG Knives released its new tools at the 2019 SHOT Show, held annually in Las Vegas. This is what you can expect from SOG Knives for 2019.

Here, I will go through the notable releases and then give the overall product lineup a letter grade (A-F). I will also highlight the most compelling offers as “instabuys.” All prices are MSRP.

Every year in January, knife companies show off their upcoming wares to the world. Benchmade was the first out of the gate this year, releasing its new 2019 stuff well before the industry's SHOT (Shooting, Hunting, Outdoor Trade) Show. Read more…

Like CRKT, SOG is in something of a transformational period. Both companies have established a solid reputation through the production of high-value knives, and both targeted shelves in big-box stores. But recently SOG, like CRKT, has made a turn toward the high-end, enthusiast market. The release of the SOG Pillar two years ago showed the brand was paying attention. That knife had premium steel, S35VN, and a number of clever design features that fit into the market well.

Last year, SOG released the Terminus XR, a locking flipper version of its Terminus slipjoint. Knife enthusiasts received it very well, even though it ran BD-1, steel nowhere near as good as S35VN. The brand repositioning continues this year with a marquee release.

First up, SOG showed off five new multitools. The brand designed two for air travel, removing the knife implement, and two specifically for the EDC market. The PowerPint and the PowerLitre are the EDC multitools. The PowerPint comes in at a very nice size — slightly bigger than the Leatherman Squirt but not as big as a full-size multitool.

The brand marketed it as a tool that is small and slim enough to ride in the coin pocket of a pair of jeans. The PowerLitre is not quite as small but is also very space-conscious. Both the PowerLitre and the PowerPint have SOG’s Power Assist feature that uses geared pivots to multiply the force the plier jaws can apply. SOG also showed off an odd scissors-based multitool.

The knives SOG had at SHOT Show spanned the gamut from high-end to mid-market to value editions.

This year, the brand showed off a full-size Aegis, with three twists. First, this Aegis is a flipper as opposed to an assisted-opening thumbstud knife. Second, it runs a frame lock instead of the old arc lock. Finally, this Aegis is a budget folder with an MSRP around $30. The handle shape, blade shape, and deep-carry clip, all of which were excellent in the original, are carried over to this new design.

Last year’s total surprise hit, the Terminus XR, is followed up with two variants. Both sport G10 handles instead of the carbon fiber/G10 laminate of the original. 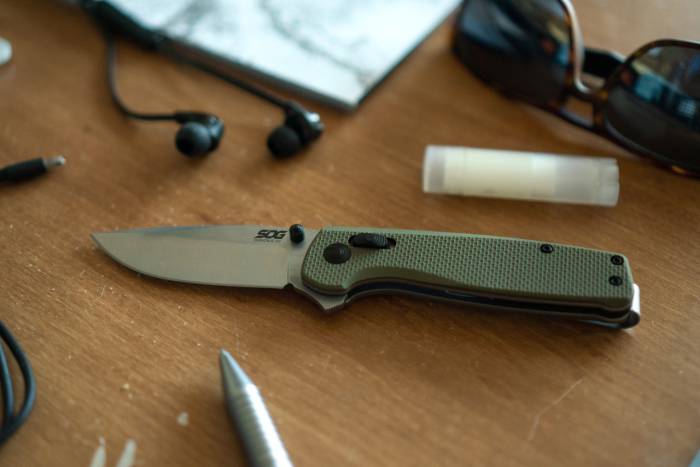 One comes in olive green and the other in red. The knives also have stonewashed blades instead of the grinder satin of the original. These will likely sell for less than the Terminus XR original, which had an MSRP of around $100 and a street price of $80.

The blade on the original was so clean with its two-direction grind (horizontally ground flats and vertically ground main bevel) and striking logo that the stonewashing has me a bit concerned for the new Terminus XR’s looks. Still, the fundamentally solid bones are there: the XR lock, the flipper, a great handle and blade shape, a bearing pivot, and the simple over-the-top, deep-carry clip. So function will likely trump appearance.

Finally, SOG showed off what could be its nicest folder ever — the SEAL Pup XR ($189). Unfortunately, there are no press pictures yet, so you have to bear with this (probably exclusive) cellphone shot.

This is a folder version of the brand’s flagship fixed blade, the SEAL Pup. It sports the XR lock and, like the banner blade two years ago, it has an S35VN blade. The SEAL Pup XR is a positively massive knife, dwarfing the 3-inch Terminus XR on SOG’s table. But it’s a sign that SOG is going to play in the high end of the folder world.

Grade A-: While not a huge showing, SOG’s 2019 lineup hits all of the right notes — a conscious nod towards the EDC market in its multitools, a cheaper, more user-friendly version of its best folder from last year, and a new banner folder in the SEAL Pup XR.

I love this new direction, and I hope SOG continues to go down this path. It has had great grinds for years and was the leader in deep-carry clips, so seeing those two features paired with better materials and simpler designs is a very good thing. SOG’s continued emergence from the big-box blade swamp is a good thing for everyone.

Instabuys: Three — the PowerPint, the Terminus XR G10, and the SEAL Pup XR are all very exciting tools that look like they will earn serious pocket time.