The Super League Triathlon race series is an aggressive, unpredictable, fast, and unconventional take on the triathlon.

The SLT series throws everything triathletes know about the sport out the window. The changing formats are new to many, even those who know or participate in triathlons.

What Is the Super League Triathlon?

The SLT is a challenging race series launched in 2017 to test triathletes in new ways. Featuring five distinct formats, SLT pits short- and long-course athletes against one another. It also stages back-to-back events, which favors versatile triathletes in a wild pressure-cooker format.

Katie Zaferes, 29, is the poster child for how to thrive in this frenzied format. She won the most recent head-to-head SLT in Jersey, a tiny atoll in the Channel Islands.

But that was a world away. Zaferes grew up playing soccer and lacrosse, swimming, and running track, only trying her first triathlon after high school with her dad. It was a Father’s Day race.

She went on to run Division 1 track at Syracuse. Then, USA Triathlon recruited her. She did well as an age-group triathlete and turned pro in 2013. Today, Zaferes is using the SLT to become resilient and well-rounded enough to reach her ultimate goal: Olympic qualification in 2020.

“All weaknesses are exposed, and you really have to be strong in all areas to survive the multiday, multiround, back-to-back racing,” she said. “It’s dynamic and cutthroat. Some race formats even eliminate athletes throughout the rounds. No one can hide, and there’s not much room for error or mental or physical weakness.”

There are SLT racing options for age-group-level triathletes up to professionals looking to win the whole tour. For the elites, the top 25 male and female triathletes from around the world battle it out for the “best all-round” title during a globe-spanning, four-stop season.

But first, racers must get familiar with five confusing formats.

Inside a Triple Mix SLT Race

Zaferes’ recent race sums up how one SLT race format works. In Jersey, it was a Triple Mix: three short triathlons where the swim, bike, and run get swapped around in each race.

“On the first day of racing, it took me a bit to get warmed up, but I got better as the rounds went on (not intentionally, and it’s a risky move!),” she said.

“I felt unprepared and my head felt frazzled. I made silly mistakes. Like on the run-bike-swim race, I came in from the run and grabbed my bike but had forgotten to take off my running shoes!”

Day two was different. “I mentally felt much more put together and was feeling really good physically. I just wanted to push from start to finish,” Zaferes said. “So I really just did my own thing and gave it everything I had.”

Zaferes currently sits atop the SLT women’s leaderboard. She’s gunning for a repeat in Malta at the end of this month. In between, we asked her what this latest bastion of triathlon is all about. 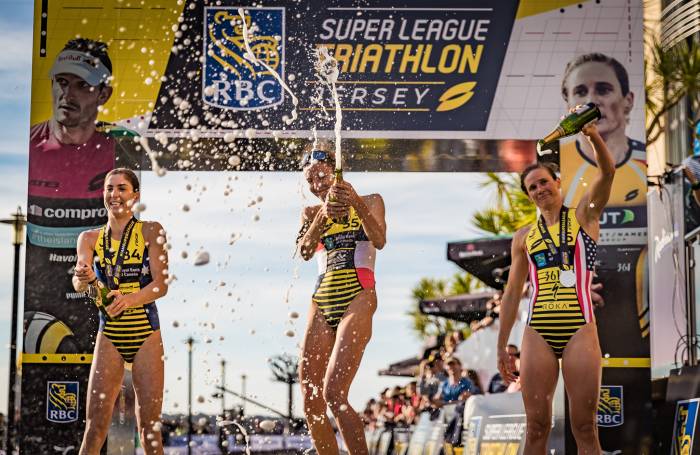 GJ: How do you train for and race SLT differently than a traditional triathlon?

Zaferes: It requires an interesting balance. Because SLT races are short and fast, you need speed. But you also need endurance to withstand back-to-back racing with little-to-no recovery.

I focus a lot on technical aspects like starts, transitions, and race tactics. It also takes a lot of mental preparation because things are always changing. I try rehearsing the races in my mind, making sure I know where to put my equipment when I come into transition and memorizing the format of each race.

What tips do you have for athletes considering getting into SLT?

I did my first triathlon just after graduating high school. It was a Father’s Day triathlon and something my dad and I wanted to do together.

I recommend signing up for the SLT races and just giving it a shot. Once you sign up, take the time to go over the formats and the course maps. And if you have specific questions, reach out to the athletes who have competed in a Super League.

What are three things that everyone should know about SLT?

Besides being pretty painful, it’s also a lot of fun!

Up Next: Get Fit, Do Good: 7 Active Volunteer Opportunities to Get in Shape

Saving…
Get Fit, Do Good: 7 Active Volunteer Opportunities to Get in Shape
Welcome to the Insane World of Off-Road ‘Ultra4 Racing’
×