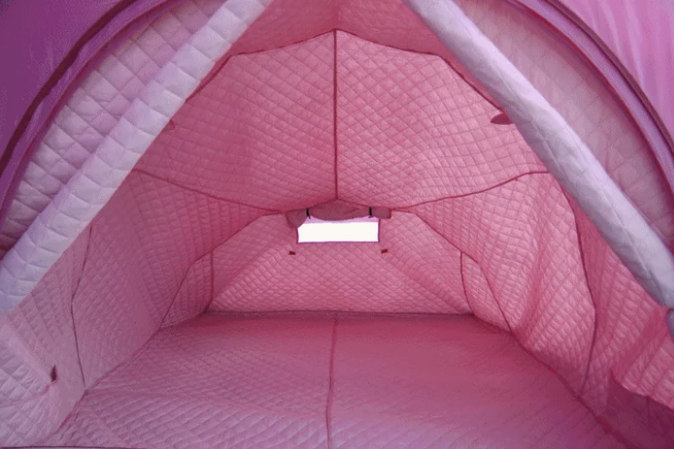 Tents are not generally designed for temperature regulation. If it’s 15 degrees outside, it’ll probably be not much warmer inside. This is why you have a sleeping bag.

Thermo Tents are designed differently. They have two layers of breathable fabric, which sandwiches two inches of insulation.

It buffers the inner sleeping area of the tent from outside temperature changes, the company claims. (As a side bonus for loud campgrounds, it buffers noise, too.)

We haven’t tested these yet and see some potential pitfalls, but the idea is unique and definitely a departure from common single- or double-wall tents sold at gear shops.

Available in three- and six-person designs, the Thermo Tent has a large, uninsulated entryway linked to an inner, insulated sleeping room. The walls of the inner room look quilted like a puffy jacket.

For insulation, the company uses a cotton/polyester blend sandwiched between the waterproof/breathable shells.

All this material adds up. The three-person model weighs in at about 26 pounds. The mammoth six-person weighs a whopping 108 pounds.

These are clearly base-camp tents, not something you’d lug into the backcountry in a pack.

And while it’s hard to imagine how much difference an insulated tent wall would make, a tent that stays cool in the sun or warm in a snowstorm would certainly be nice so long as condensation doesn’t become overwhelming.

All the bells and whistles of the tent come with a price. The three-person sells for $523 on Kickstarter but will retail for close to $650.

The insulated tent is an interesting concept we’d love to research further. If this first campaign gets off the ground, it will bring a new option to those who sleep in temporary shelters.

If you want to support the campaign or get one of your own, you should act fast. The campaign is almost fully funded with five days to go.

Up Next: Mesh-Wall Tarp Gives ‘Oasis’ From Bugs While Camping