Erik Noren is known for over-the-top custom bikes. His creations, built under the Peacock Groove brand, span from the utilitarian to rideable works of art. This month, Noren will begin selling bike parts. 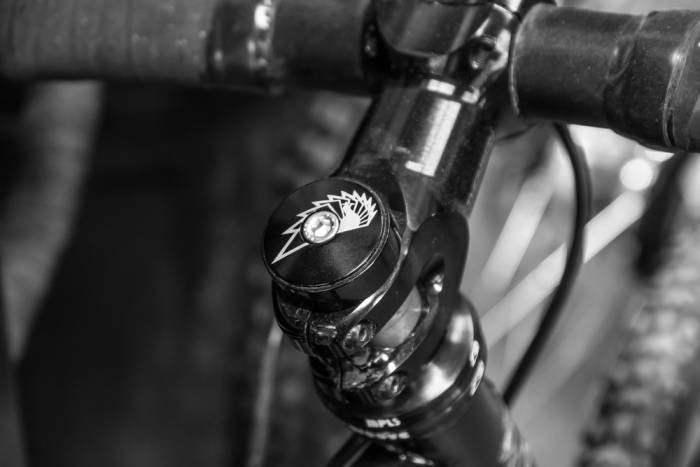 Starting with a humble headset, Minneapolis-based Peacock Groove moves into territory most often handled by mass manufacturers in Asia.

But instead of shipping containers and tariffs, Noren is sourcing local. He has components moved through the manufacturing process by bike courier, or he pedals to pick things up himself around the city.

Noren gets a little worked up when he talks about the inception of the Peacock Groove headset.

Needing the part to complete his “deep custom” bicycle designs, Noren reached out to a certain high-end manufacturer but was hit with extensive requirements for extending credit.

Frustrated, he decided to buy a 1980’s CNC lathe and make his own parts. He hired a machinist and got to work.

While the idea to design and manufacture a headset was equal parts immediate need and middle finger to the industry (a practice for which he has become known), as with everything that comes across his bench, Noren had to put his stamps of innovation and style onto his new product.

The headset comes with three interchangeable top races that set the stack height, so users can eschew spacers for a clean look. A flange makes it easier to install the races, and tool flats make removal without a special tool easier. 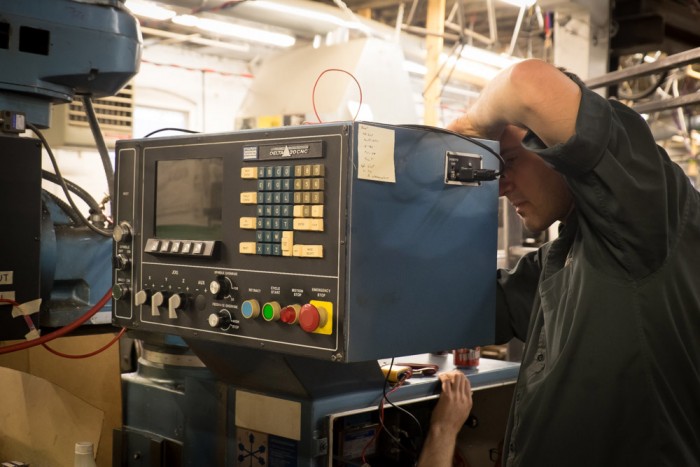 Imperial milling gives the headsets a unique profile. While a few standard colors will be available, Noren plans to change up colors and engraving in each batch.

Beyond the headset, Peacock Groove has produced parts for many of its custom bikes, including crowns, forks, seat posts, and handlebars. But most of those were one-offs made for a specific bike. The new initiative, starting with the headset, is a step toward Peacock Groove making parts anyone can buy.

Other USA-made headsets are hard to come by, only Cane Creek and Chris King are producing these components domestically in quantities. They occupy a similar high-end slice of the market.

“At a friend’s old house, we were looking at the woodwork and it was very gothic, with great sweeping buttresses and angular swoops,” Noren said. “Knowing we were eventually going to make headsets, I thought we could do something like that, but how do you reflect that architecture in such a limited area?”

After a no-joke drawing on a napkin, Noren worked with his machinist, Cyprian Troyer, to model the headset. A handful of test pieces and refinements were next, and then they made a production batch.

“I wanted to see swooping architecture and good angles on it, because everyone copies the round design.”

Noren strived to bring his community-oriented philosophy and no-waste goals to the product, too. Indeed, he has a bona fide “tractor bike” to haul supplies. It is a ball-hitch-equipped rig that mates with a trailer capable of hauling large loads.

As much of the moving of materials through the supply chain as possible is done by bike, either personally or through the Minneapolis courier company Rock-it Delivery.

“Keeping certain things local does cut into our profit margin, but I feel good knowing I can get Rock-It a run and keep the parts out of the lazy shipping chain.”

The headsets are finished at a company in nearby Edina, Hard Anodizing. Laser etching is done in Minneapolis by Create Laser Arts. The parts are packaged simply in a shop towel and a velvet bag — the instructions are online.

“There’s no paper, no plastic,” Noren says of the zero-waste shipping program.

Always working on new ideas, Noren was confident but cagey when asked about any new endeavors: “There’s something in the oven that’s coming out in September. You should probably check it out, because we’re baking up something awesome.”

For now, Peacock Groove begins with the headset. The 1-⅛ inch standard headset will sell with three interchangeable top races for $180.

Look for it soon in local bike shops, or stop by Peacock Groove’s facility off the Midtown Greenway Bike Path where, beginning in June, Noren will sell you the parts in person.

—Bjorn Christianson writes “The Low Five,” a weekly column examining the world of biking through the lens of the Minneapolis cycling scene. All photos © Bjorn Christianson, more at flickr.com.

Up Next: Ditch Your Car For ‘Velomobile’