HOKA ONE ONE released the wildest running shoe we’ve ever seen.

“Using this product for anything other than running may impair balance and dexterity. So don’t wear these on stairs or while driving.”

Suffice to say, that’s a warning we’ve never seen before — especially from a brand about its own shoe. And that’s not even the craziest part.

The shoe — HOKA’s new TenNine — looks unlike anything we’ve ever laced up. And according to the brand, these shoes are as purpose-built for running as cycling shoes or ski boots are for biking and skiing. 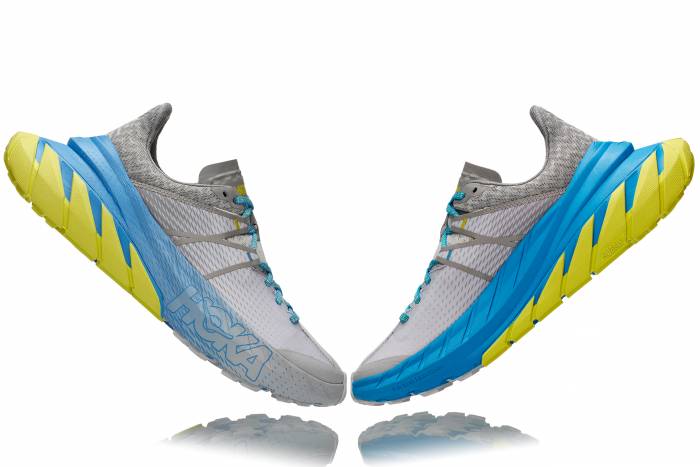 The TenNine fulfills HOKA’s promise to “attain maximum speed downhill.” And it all hinges on an entirely new midsole design and construction. HOKA claims the new geometry will provide more stability and a smoother ride over any terrain.

And while the TenNine carries a standard 4mm offset, it does so between a jumbo 33-29mm heel-toe stack. In fact, HOKA says it’s the biggest yet sleekest running shoe it’s ever made — and “the biggest on the marketplace.” 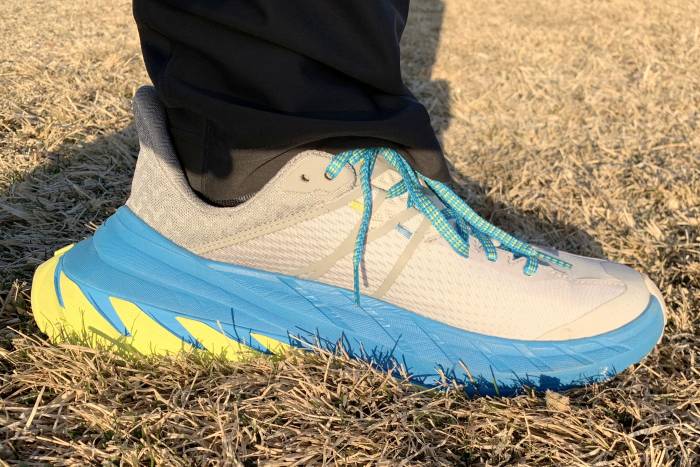 What really turns heads, though, is the TenNine’s unmistakable profile with its prominent, protruding heel. It is, in a word, weird. And HOKA fully acknowledges that.

“Simply put, there has never been an innovation like TenNine in footwear. The design itself proves nothing short of jaw-dropping,” the brand said.

Of course, if the look doesn’t drop your jaw, the price probably will. The TenNine retails for a whopping $250. But we suspended our disbelief and slipped on a pair for a first look review. Here’s what you need to know.

Lace up the TenNine and I promise, you’re going to scratch your head. There’s no getting past the cartoonish nature of the immensely protruding sole under the heel.

And if you do ignore the warning and decide to wear them walking casually, expect some really puzzled looks from passersby. “Bold and unexpected” is an understatement. 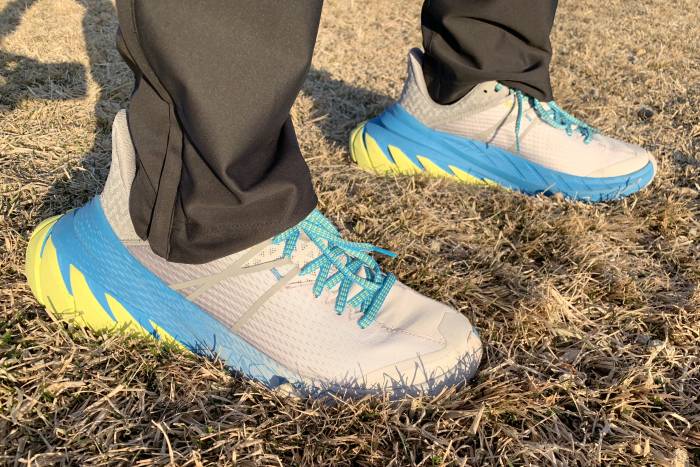 But as ultrarunners and footwear nuts, we were rabid to know how these would perform on the trail. Strapping them on with a healthy dose of skepticism, we headed out on a morning run in Denver.

While enormous, the TenNine is still reasonably light on the feet. At 12.7 ounces per shoe, it falls right in the average zone of larger trail runners. And running with a midfoot-strike gait, the TenNine doesn’t feel all that odd underfoot.

But turn downhill, and things get — well — different. The enormous protruding heel sort of catches you as you jaunt downhill, easing your footfall that then rolls through the toe.

It’s a unique sensation, and we haven’t decided whether we like it. On one hand, the shoe sole’s surface area definitely softens the jarring impact of downhill running. But on the other, it seems to encourage overstriding and heel striking.

The sole is also massive on the sides. While we’ve not yet tested these on rocky trails, we suspect it to be one of the least precise trail runners on the market. If you need accurate foot placements for a technical trail, it seems unlikely this shoe would be a top choice. 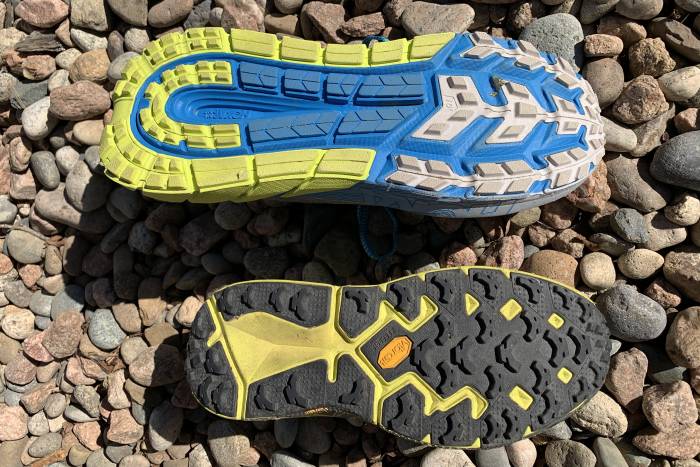 Given we’ve only had a day to try these shoes on a few quick runs, the jury is still out. We’ll update this story with further review as our editors put down more miles.

If nothing else, this is a remarkably unique shoe that will move the design paradigm. And while bizarre in some ways, we’re excited to see HOKA once again rethinking the running shoes that will pound out big miles on long trails. 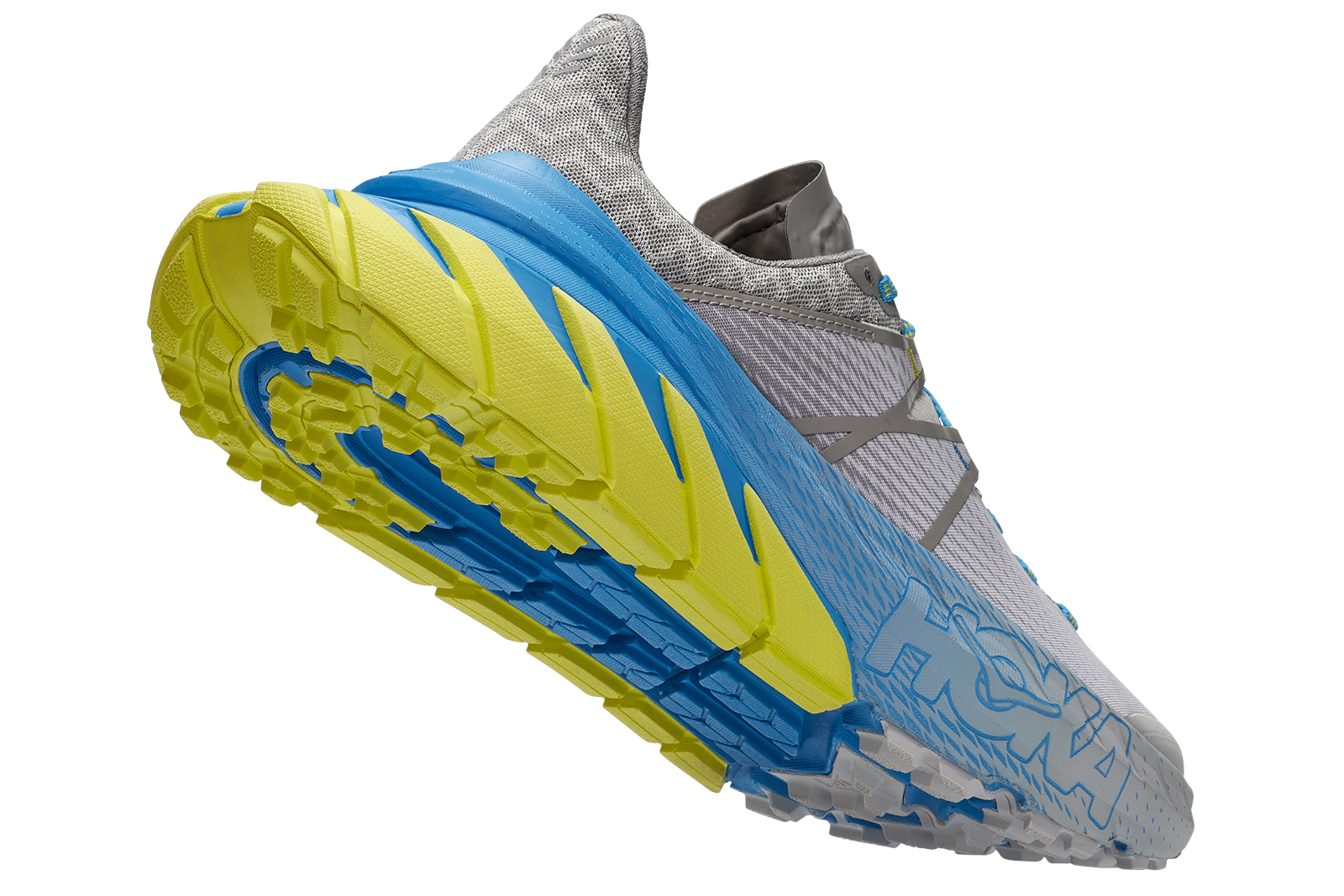