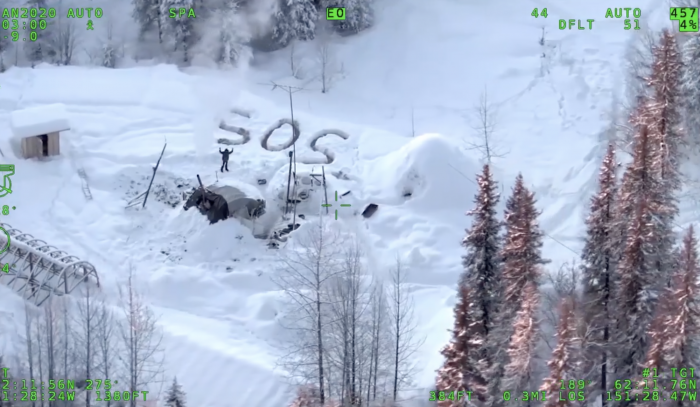 SURVIVAL: Man Survives for 3 Weeks in Alaska With No Shelter. Tyson Steele was living in a remote cabin north of Anchorage when it caught fire, leaving him stranded in freezing temperatures.

To survive, Steele was crafty: He built a snow tent, then a basic shelter out of the debris, and drew messages in the snow with ash. State troopers rescued him via helicopter after 3 weeks.

Rescuers found two bodies after the initial search and one later, after another skier was reported missing. Search-and-rescue and local volunteers recovered all survivors and fatalities from the mountain. The resort has since reopened.

RECORD: South Carolina Man Sets Record for Exoskeleton Marathon. Adam Gorlitsky became paralyzed after a car crash in 2005 and has since become an advocate for adaptive mobility.

This Saturday, he ran the Charleston Marathon in 33 hours, 50 minutes, 24 seconds. Unlike most para-athletes, Gorlitsky didn’t compete in a wheelchair, but rather in a robotic exoskeleton called ReWalk, which allowed him to walk and run on his own legs.

Gorlitsky set a new Guinness World Record, beating the previous one by over 2 hours.

Adam Gorlitsky, who is paralyzed from the waist down, completed Saturday's marathon with a time of 33 hours, 50 minutes and 23 seconds. https://t.co/b9bvDABTUM

SLED: Blind Sled Dog Runs 100 Miles. An Alaskan husky named Indy just ran 100 miles, which is impressive considering he runs without the use of his sight.

Indy, who has been retraining as a sled dog, pulled on a team with his canine friend Popcorn in the 100-mile race in Cook County, Minnesota. He’s training for a 300-mile sled dog marathon later this month.

Harbour Air modified one of its seaplanes with an electric motor to convert the plane to all-electric power. The plane’s first test flight in Vancouver lasted about 5 minutes.

Read all about it here: https://t.co/jtrUmEfARI