Jake Burton Carpenter was a legend at home, in the workshop, and on the mountain. Now, his namesake brand’s Mine77 collection is paying homage with a massive drop of winter gear.

Timi Carpenter has big boots to fill. His father, Jake Burton Carpenter, who passed away on Nov. 20, 2019, founded Burton in 1977. The late legend famously churned snowboards out of a barn in Vermont, drummed up demand by petitioning ski resorts to allow snowboarders to ride their lifts, and built Burton into the biggest snowboarding brand of all time.

But Burton wasn’t simply a canny businessman, he was also an impassioned innovator. From adopting P-tex and metal edges from ski manufacturers to slapping highbacks on bindings, his inventions and improvements on existing gear have forever altered the course of snowboarding in the course of the sport’s short history.

And the latest collection, launched today, embodies that tireless creativity and knack for product design.

In 2018, after battling cancer and stepping back from his daily duties, Burton launched Mine77, a small, experimental line beneath the massive brand umbrella. In an interview with longtime Burton rider Jack Mitrani, Jake Burton introduced Mine77 to the world:

“Product development is in my blood,” he said. “I love it — obsessing over every detail, tweaking, testing, and always improving. It’s something I can’t stop thinking about. This collection is my creative outlet.”

Mine77 was admittedly polarizing from the jump: products were experimental and, occasionally, fashion-forward. The quality, too, was top of the line, and prices reflected that. “I am not trying to please anybody but the rider in this,” Burton acknowledged. “It was a really hard sell to get people into snowboarding, and this feels a little bit the same.” 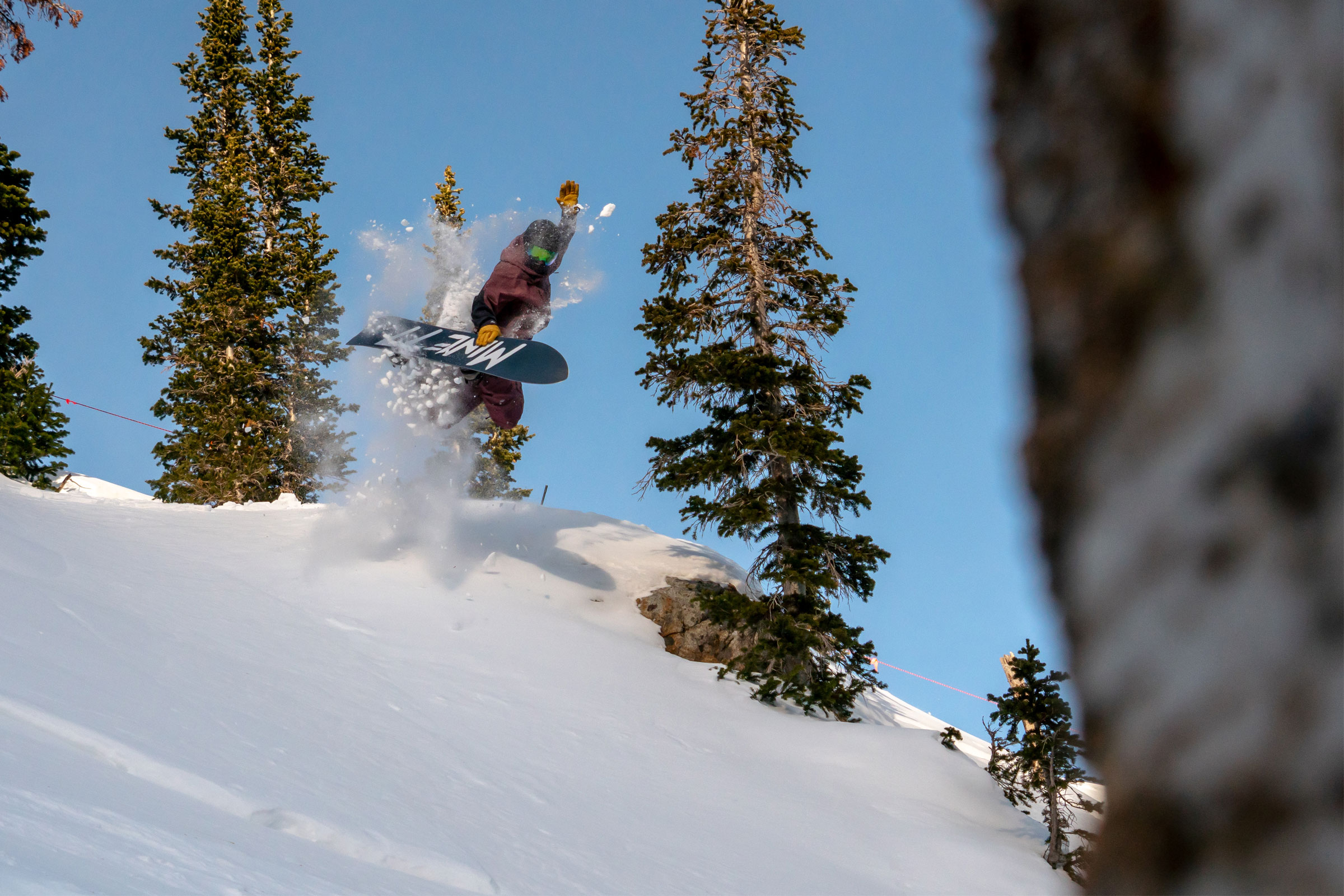 Despite the out-of-the-box creative direction, or perhaps because of it, Mine77 has enjoyed quiet success. Burton loyalists look forward to seasonal product drops in a way that’s more common in sneaker-head or streetwear culture. And the gear often sells out quickly.

Over the last week or so, we’ve had the opportunity to test a sneak peek of the Mine77 Deep Winter drop — the fruits of Carpenter and his team’s labor.

It includes a JBC Cruise snowboard, outerwear, base layers, three-piece touring poles, carbon-fiber approach skis, and even moccasins. While each piece of gear impressed us, the overall cohesiveness of the collection blew us away.

A slightly modified version of Burton’s popular Skeleton Key model, the JBC Cruise ($800) alone is worth a trip down the Mine77 rabbit hole. 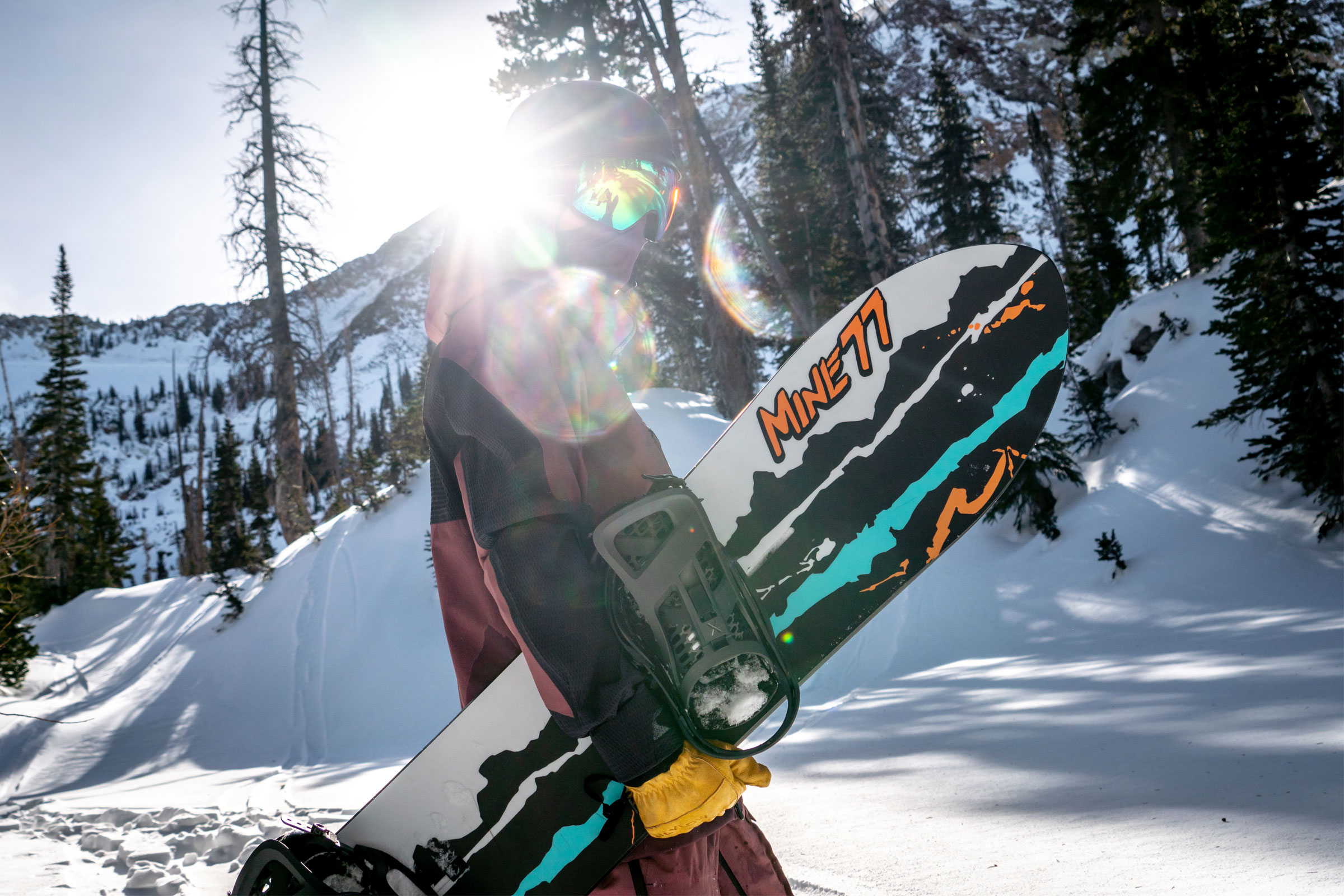 The Mine77 team has primed the directional all-mountain board for both hardpack and powder, thanks to a rockered nose that tapers back into a maneuverable, cambered waist. It has a balanced flex, soft enough to be playful, yet stiff enough to edge quickly and reliably.

“It’s just right for the all-mountain ripper,” commented one tester. “Great on ice, chunder, and still playful enough for side hits.” He recommended the board for intermediate-to-advanced riders who “carve fast and jump off stuff.”

Impressive performance aside, the retro topsheet is a top talking point — the graphic borrows from Burton’s ’89 Cruise.

As we expect from Burton’s premium outerwear, the construction, fit, and performance of the 3L GORE-TEX Topo Jacket ($600) are all the best in the jacket’s class.

The jacket includes panels of bafflingly stretchy yet still waterproof and breathable GORE-TEX Topo fabric, which radically improves range of motion and comfort. The functional details impressed testers. A plethora of pockets, mesh-lined pit zips, and a powder skirt ensure comfort no matter the conditions or objective.

Our favorite aspect of the jacket, however, was the photo of Burton slashing a turn that’s digitally printed on the back. Shred nerds will be stoked to note that Burton’s riding an ’89 Cruise in the shot. 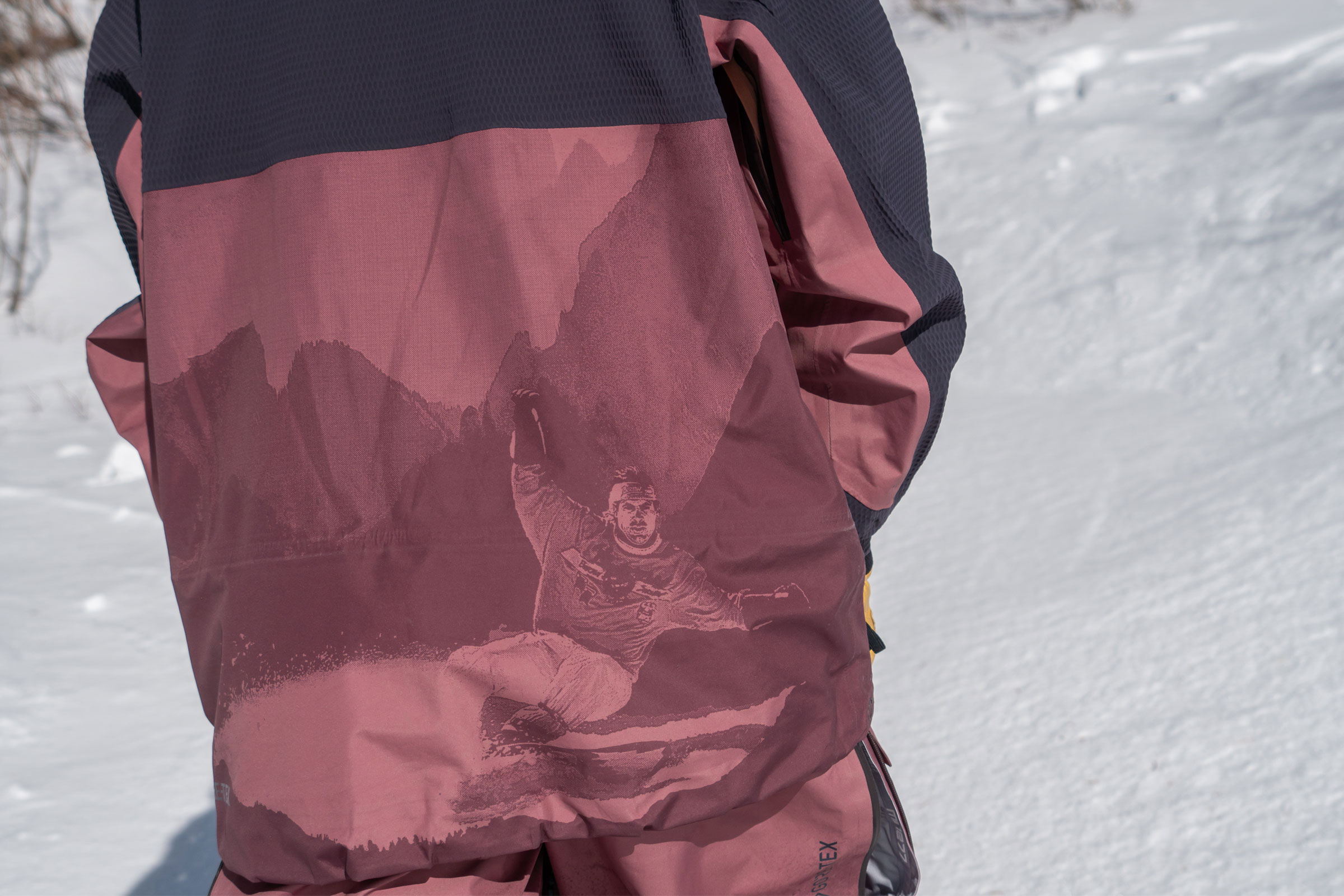 It’s paired with the 3L GORE-TEX Cargo Riding Pant ($500) — a comfortable, lightweight baggy pant with skin-track-ready vents and plenty of pockets. This show-stopping kit earned our testers multiple compliments in the lift line.

Burton originally designed the 3-in-1 First Layer Shirt ($100) for powder, but it turns out it works pretty well in a pandemic too. The built-in balaclava and face mask allow you to stay warm, abide by resort safety guidelines, and protect yourself and others in the lift line.

If you rock Anon’s magnetic goggles — we recommend the M4 — the balaclava is compatible with Burton’s MFI system. The MFI has removable magnets that seal up that dreaded mask-goggle gap.

The stretchy, midweight layer is comfortable, although you may find it on the heavier side for warmer tours.

The corresponding First Layer Pant ($90) forgoes the skin-tight formula of so many base layer bottoms and instead has a loose, comfy fit that feels good on the hill and looks good off it. The pants also have zippered pockets — a welcome feature if you do rock them during apres.

Remember the kicks that the kid in “Ice Age” wore? Picture those, but warmer and grippier thanks to a Sherpa fleece lining and a custom rubber sole. Of all the Mine77 gear we tested, the Winter Moc ($250) is at the top of our wishlist. For early-morning drives to the trailhead or tailgating after a day of shredding, these moccasins are phenomenal. 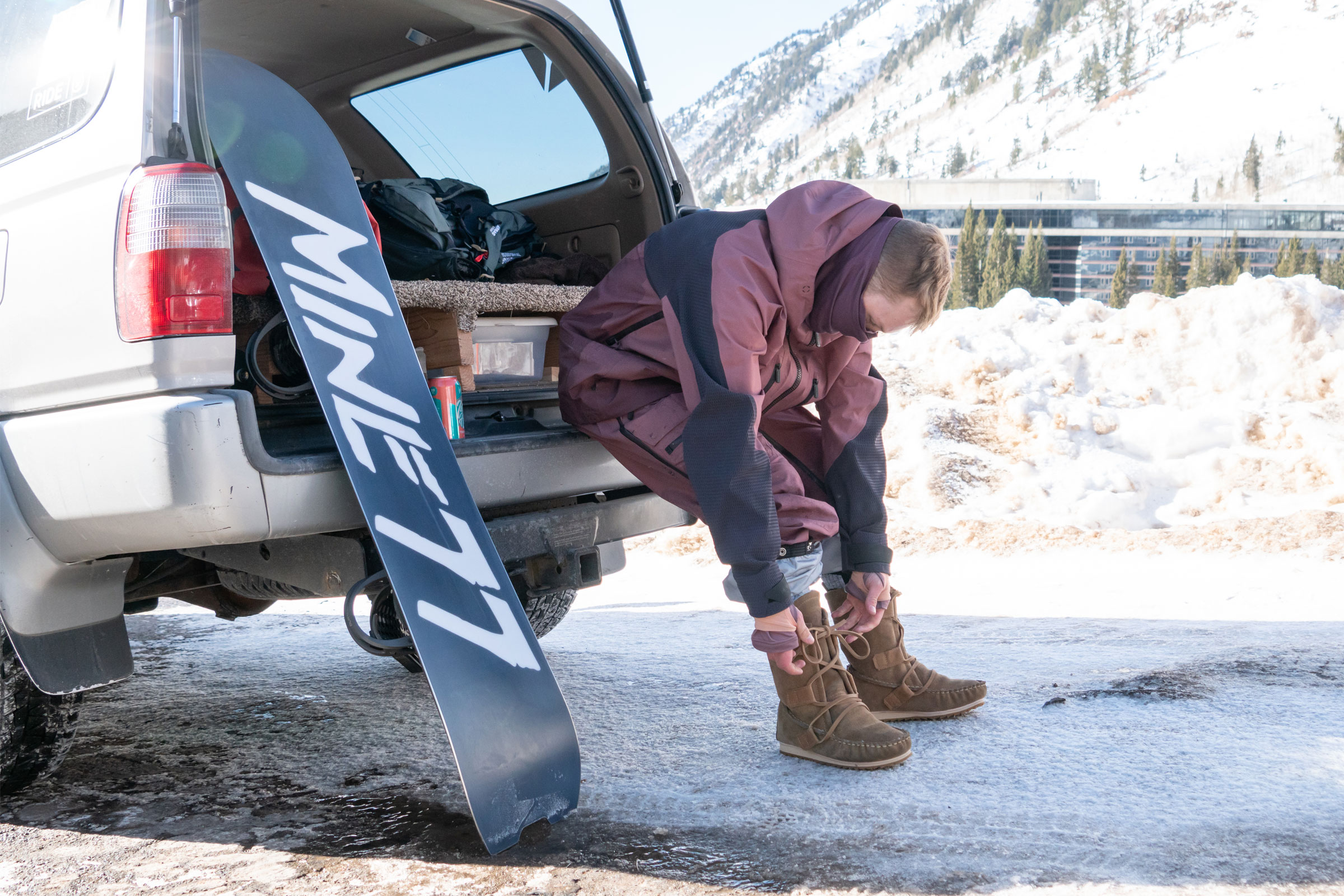 Poles aren’t typically a fashion statement, but Carpenter and Co. gave these Black Diamond Compactors ($150) a Cantaloupe Ombre color scheme that will make your touring partners do a double-take. The three-piece collapsible design is a go-to for splitboarders and drifters alike. 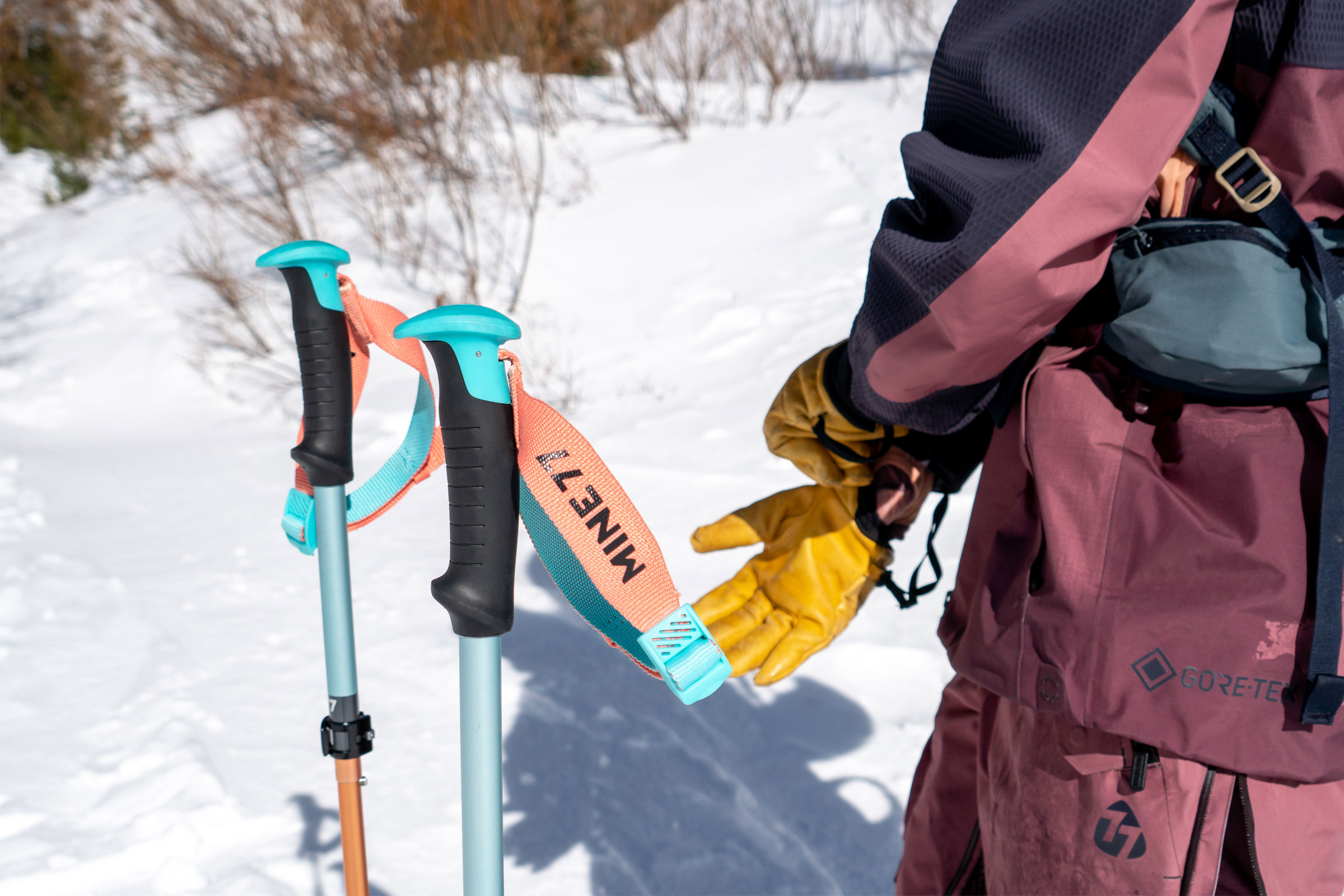 For backcountry travelers who can’t afford a split, have a treasured solid powder board, or are disciples of the pow-surf revolution, there’s an option that trumps snowshoes: Drift Approach Skeez ($500).

The Skeez are 6.75 inches wide by 35 inches long, with bases that sport permanent nylon skins. This means quicker climbing than snowshoes and quicker transitions than splitboards. They’re complete with two heel risers, a folding heel cup, and locking straps.

Most importantly, the carbon Skeez are lighter than similar systems. They’re only 5 pounds for the pair, which is noticeable but still manageable on the pack.

For transparency’s sake, we haven’t had a significant enough snowpack in Utah to put these Skeez to the test in bottomless powder. But they seem like an efficient and buoyant option in comparison to snowshoes.

All in all, Burton fans will be hyped on Burton’s initials gracing this Drift x Mine77 collaboration. 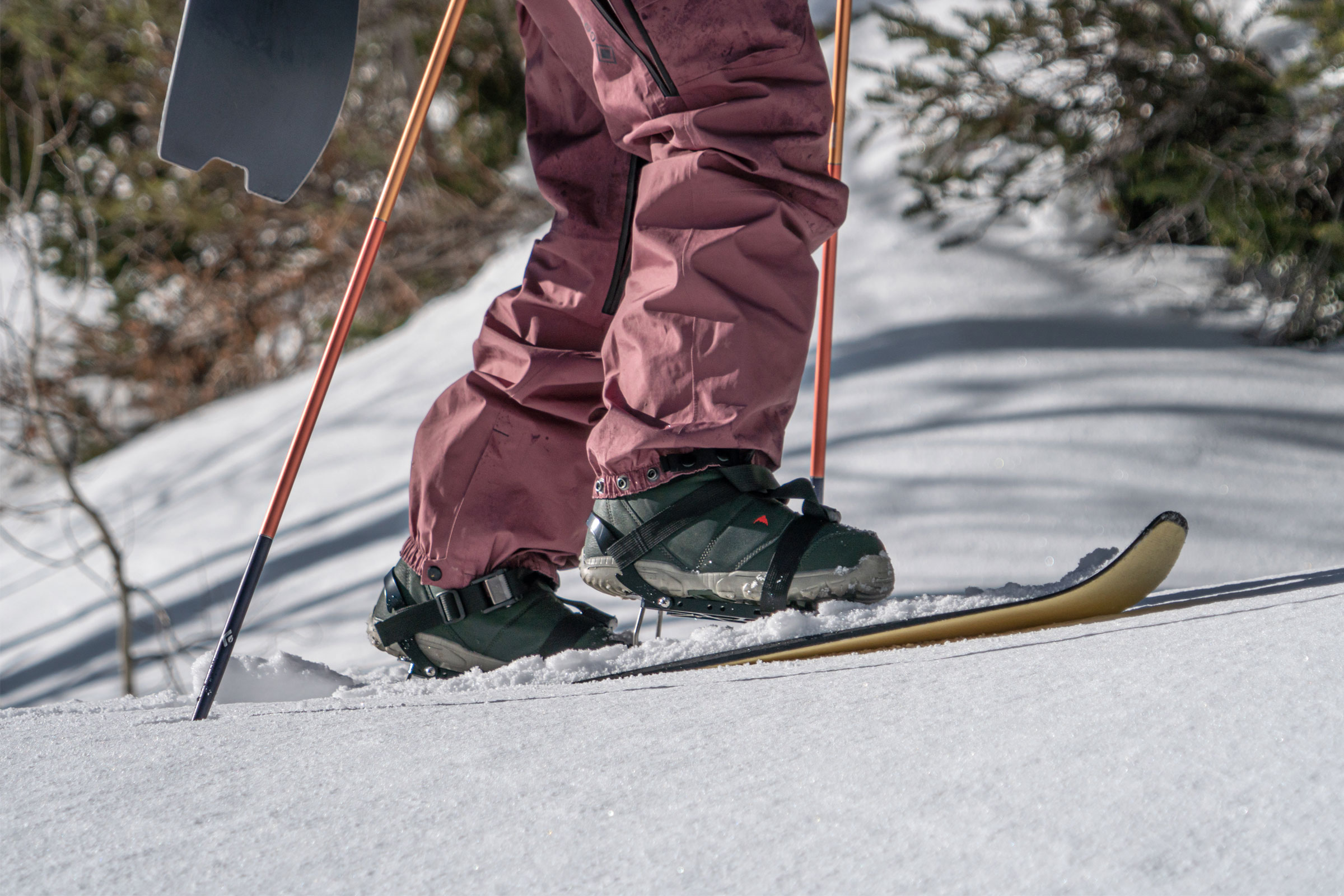 We didn’t get our hands on one of these Blotto Mine Surfs ($1,000) — limited editions of Burton’s popular Backseat Driver Pow Surfer — but few will. Carpenter worked with a photographer and painter to make just 18 hand-painted, limited-edition boards.

“Dean Blotto Gray, the photographer, hand-painted 18 wooden planks, roughly the size of the Backseat Driver,” Carpenter told us. “It was super special because he actually came to our house and painted all of them in our garage. [It] was really cool to see his process and give my feedback.”

But good luck grabbing a Mine Surf — we wouldn’t be surprised if they’ve already sold out.

Since the 2018 launch, Carpenter’s been the face of Mine77. He watched his father’s creative process closely over the years to help develop products. In 2020, Carpenter took over the role of creative lead.

“My dad was super detail-oriented — everything had to serve a purpose, he didn’t just make a product for the sake of making a product. He wanted to push the boundaries within creating a product,” said Carpenter. “Although I have my own ideas, I always try to take a step back and look at things through his lens.”

While Carpenter obviously doesn’t have the decades of experience under his belt that his father did, he actively taps into the snowboarding world for feedback on his designs. He cites Burton team riders as being mission-critical to product development.

According to Carpenter, part of the beauty of Mine77 is that it’s as nimble as a small brand yet has the resources of a big one. “We have a tight-knit team,” he explained. “We can communicate super fast, and we can turn a product around in 8 months.” That agility, with the ability to experiment with new materials, “is the best of both worlds,” Carpenter said.

Mine77: A Look Back and Ahead

When asked about his dreams for the future of Mine77, Carpenter said, “My biggest hope would be to innovate and bring new technologies and new products to snowboarding that revolutionize it and help get people into it. [To help] the layman, help the pro, have a better experience.”

It’s no stretch to point out that Carpenter’s goals echo those of his father. Nor is it to claim that Burton’s influence is ubiquitous in Mine77, like the touching homages the team added in the wake of Burton’s passing. There’s the throwback graphic on the JBC Cruise, and the little patches stitched into the outwear that read, “In Commemoration of Jake Burton Carpenter.” 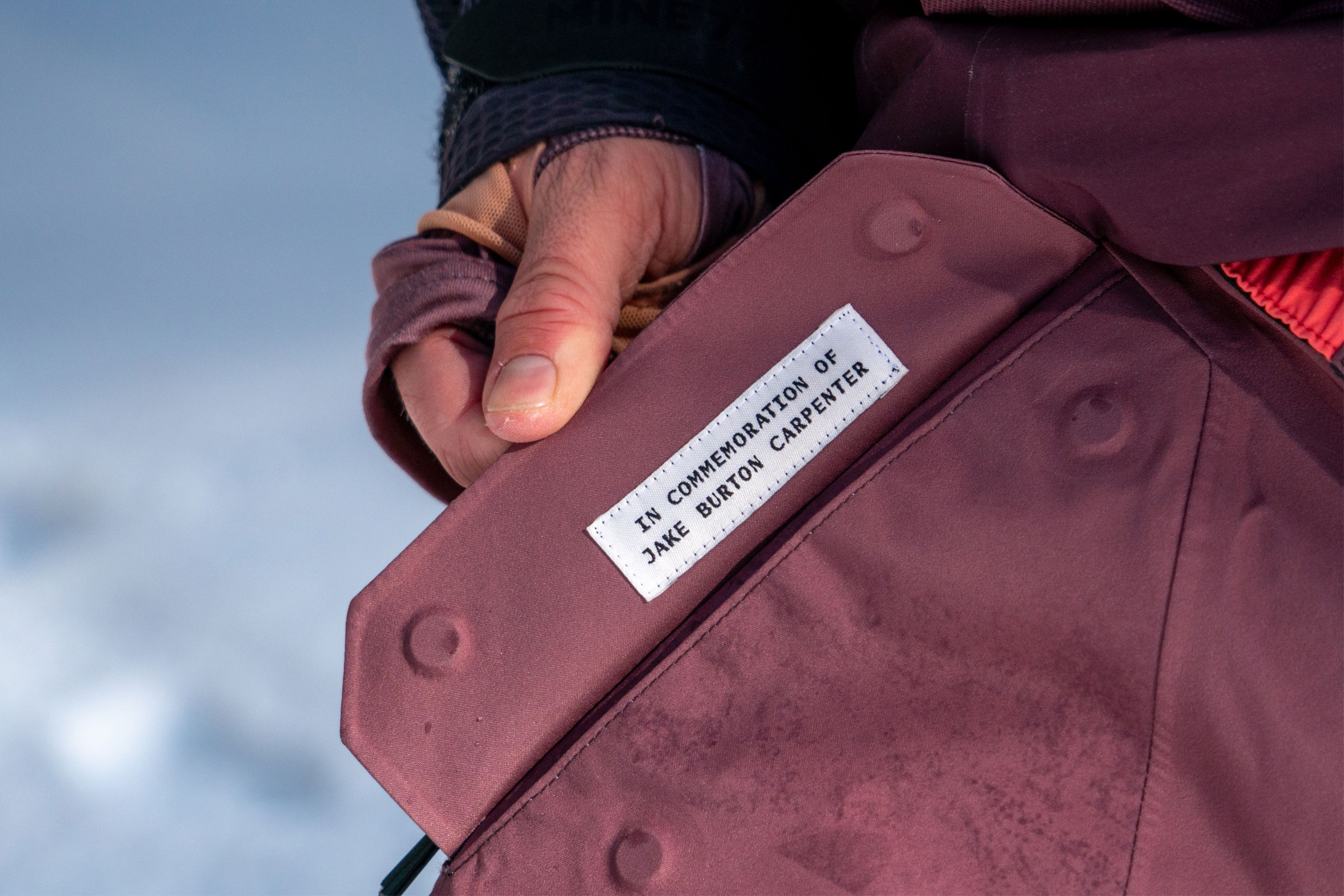 Perhaps they’ve passed the torch, and for a moment, we’re witnessing father and son’s fingerprints flicker in the same flames. And maybe Timi Carpenter doesn’t have big boots to fill at all. Maybe he’s honoring the man who walked before him while setting his own bootpack.

Regardless, the future for Mine77 looks bright, and we’ll be eagerly awaiting the next drop along with the rest of you.

See Mine77 at Burton