Stark-white and minimal in build, a jacket line from Columbia Sportswear will rock the outdoors industry with a litany of environmental upgrades when it comes to market for 2017. 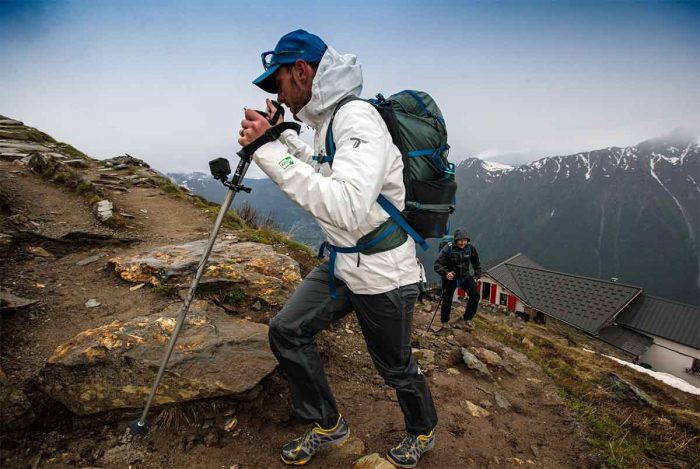 Last week, in Chamonix, France, GearJunkie got an exclusive look at a to-be-released jacket line that uses no dye in its manufacturing. It’s made of recycled plastic bottles. And (the kicker), the design eliminates a caustic chemical found, until now, across the industry.

The news goes public today. Columbia Sportswear‘s announcement of the OutDry Extreme ECO Shell line has heretofore unseen sustainability claims. Most notably, the jackets are said to use no fluorocarbons in their materials, membranes, or treatments.

Fluorocarbons or perfluorinated compounds, often shortened to PFCs, are manmade organic chemicals widely found in waterproof-breathable jackets, despite being flagged as environmental and ecotoxicity concerns.

They are seen in jacket treatments, including the common face chemicals called DWRs, as well as in Gore-Tex products and jackets from most major brands.

In nature, PFCs do not easily break down, and the chemicals can be pervasive, with trace amounts found in people and wildlife around the globe. As one source, see the “Leaving Traces” report from Greenpeace for some larger context on the concerning issue in the outdoors industry.

Brands know there is a problem. Look at Patagonia, a sustainability champion in the industry, as an example: Like its competition, Patagonia relies on perfluorinated compounds, and it notes in an article the company’s designers and engineers have only discovered a “temporary solution” that is “not good enough, but it’s the best option we have found so far.”

Columbia Sportswear released its OutDry Extreme line this spring. It eliminated a bulk of PFCs with a new construction that does not require a traditional DWR. The next evolution, the to-be-released eco jackets, which contain no fluorocarbons and are made of recycled fabrics, hit stores this coming December for $199.

I wore one of the jackets for three days in France, where more than a dozen journalists were invited to climb, trek, and bike at a launch event.

Like the original OutDry Extreme, the upgrade has a smooth, almost rubbery, face. Its waterproof-breathable membrane is on the exterior, thus eliminating a fabric layer and the need for a substantial DWR treatment to make water run off or bead.

We found a range of weather for the first review. Clouds flanked the area’s precipitous terrain, with trails, tram cables, and climbing routes tangling on faces that ascend thousands of meters from the valley floor.

Mount Blanc was mostly obscured at its top, though dark ridges were climbable during a three-day wintery front.

The jackets stood out with their all-white aesthetic. On a climb halfway up Mount Blanc, on high-altitude June snow, a guide commented how I might get visually lost amongst the frozen terrain.

But the wispy shell was not designed primarily for sub-freezing days, despite my test. This is a rain jacket, a lithe shell that folds up small and has few features beyond its zipper and hood.

The snow-white look is the result, as noted, of a material process that uses no dye. Columbia says the dye-less construction results in 80% less water used than required for color coats.

The jacket’s thread, zipper pulls, and cord eyelets are made of recycled materials. The fabric cut for each jacket is cited as repurposing more than 20 plastic bottles, which see new life in the form of a polyester shell.

Columbia obtained a Bluesign stamp of approval, meaning the jackets are third-party endorsed as sustainable textile products that “eliminate harmful substances right from the beginning of the manufacturing process.”

The OutDry Extreme ECO Shell line has men’s and women’s jackets, including the Ex ECO Shell model I reviewed in France. Overall, they will register as only a tiny fraction of Columbia’s total jacket sales; most of its outerwear is of more traditional design and includes the use of PFCs.

But the 2017 line is a start in the right direction, and one which could affect the wider jacket world inside Columbia and beyond.

One company representative noted that when Toyota launched its first Prius hybrid vehicle most all of its cars offered that year still relied fully on gas. A shift came as the car gained consumer trust, and its popularity magnified the hybrid trend.

Columbia is not the only PFC-free option. Niche companies offer non-PFC outerwear, as do brands with waxed-cotton and other fabrics that don’t need a DWR.

But the Columbia line is different; it feels and functions like a high-performance waterproof-breathable shell and can compete with models from the major brands that dominate outerwear in the industry.

Rain pounded at lower elevations in the Alps. I joined a group one day to run a segment of the Ultra-Trail du Mont-Blanc (UTMB) route, a famous ultra race Columbia now headlines as the sponsor brand.

A few of us wore the Ex ECO Shell, pacing out the initial kilometers through fog and curtains of rain. I pulled the hood as tight as it’d go, the wind swirling sleet then, later, kicking down sharp hailstones as the group reached a pass.

As a waterproof layer, the jacket proved solid in the storm. Its thin shell diverted wind, kept out the rain, and breathed at least as good as the traditional options in my closet.

See the launch video from Columbia on page 2. The brand reports on the OutDry Extreme ECO Shell debut today on its blog.

We look forward to the line launch, and we’ll cheer for any environmental upgrade in the outerwear world, from chemical tweaks to product design, be they vibrant colors or pure white.

Up Next: REI ‘House Brand’ Reboots As Premium Gear