A new kind of fat bike, power is transferred to both the rear and front wheels when you pedal. The result is better traction and mobility on snow and variable terrain. 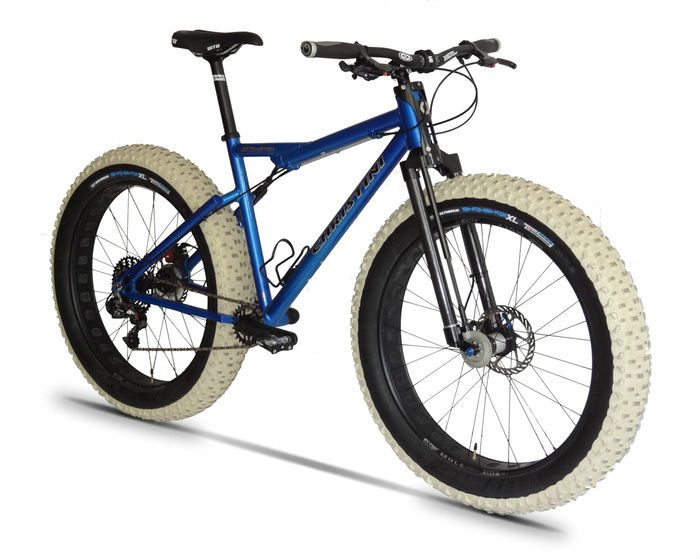 Built for an expedition to the South Pole, the Cristini AWD fat bike is a veritable Rube Goldberg of drive shafts, universal joints, and shift-on-the-fly clutches. Now, that madness is available to the public.

A marvel of cycling design, this all-wheel-drive bike is available on Cristini’s Kickstarter page. The Philadelphia-based bike builder will sell it until Nov. 19 starting at $5,000.

The campaign will raise money for Australian adventurer Kate Leeming’s bicycle expedition across Antarctica via the South Pole.

In 2014, Daniel Burton became the first person to bike to the South Pole, traveling 730 miles.

Cristini initially built the AWD Fat in 2013 as a prototype. That model was a split-frame design with stays compatible with 4-inch-wide tires.

Testing in Greenland was so successful the Cristini crew decided to shoot for maximum traction. The company made a true fatty capable of 5-inch tubeless Vee Rubber Snowshoe tires.

It went on sale this month. The company touts it as the first production-model all-wheel-drive fat bike.

The all-wheel-drive system works through a clutch mechanism that can be disengaged, and it transfers power from the rear hub to the front.

A drive shaft on the non-drive side of the rear hub is turned by the wheel, which is integrated into the frame and spins a universal joint at the top tube.

Power is then carried to the head tube and down through the fork, turning another clutch-engaged drive shaft on the front.

Clear as mud? Watch the video below.

Cristini makes a version with a battery for extra power and also a smaller split-frame model that does not necessitate a u-joint. It accommodates up to 4-inch tires.

The company then shifted into the AWD motorcycle market, where it’s been since. Leeming’s request brought the brand back into the cycling world.

All of Cristini’s bikes are hand-built at its Philadelphia shop.

If you’re tackling your own expedition, or just want to turn heads from everyone stuck in one-wheel drive, check out the brand and its unusual bikes.

Up Next: Designer Ride: Custom Bike ‘Makes No Sense’