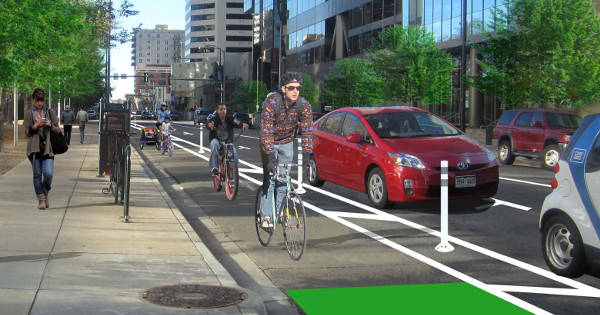 Colorado will spend $100 million on improved bike infrastructure over four years; Photo by People For Bikes

[leadin]Coloardo is about to make a big investment in the future of biking.[/leadin]

Gov. John Hickenlooper today announced Colorado will spend $100 million over the next four years to make it the “best state for bike riding.”

The money will be used to give more people access to bikes, make it safer to ride bikes, add bike lanes, and improve driver education. We’re guessing that means separated on-street lanes, bike parking, an expansion of the existing “B-Cycle” bike-sharing program, and road signals and signs dedicated to people on two wheels.

Media campaigns aimed at educating drivers about sharing the road with bikes are also likely.

“Our goal is to make Colorado the best state for biking in the country, which will help fuel our robust economic growth and tourism industry, move us toward a cleaner environment and advance our goal of being the healthiest state in the nation,” said Hickenlooper.

Colorado is often ranked the fittest state, and was recently ranked the most physically active state in the country. Even with these laurels, Colorado has an obesity rate of 23 percent. (Biking is one way Colorado hopes to lower obesity rates.)

Gov. Hickenlooper made the announcement at the Interbike Industry Breakfast presented by PeopleForBikes. Interbike is the largest bicycle trade event in North America, bringing together manufacturers, retailers, industry advocates and media to conduct the business of cycling.

Hickenlooper is the first governor to speak at Interbike in the show’s 33-year history, the organization reported.

At the state level, the Colorado Pedals Project, Bicycle Colorado, Great Outdoors Colorado, and other organizations are working with the Colorado Department of Transportation, Office of Economic Development, and other state agencies, to make a plan for the effective use of the $100 million.