There are 195 countries in the world. This cyclist has biked through 141 of them. And he’s not done yet.

Patrick Schroeder began his quest to bike in every country at age 19. A decade ago, he left his home in Germany on his first grand adventure. He had no clear plan at the time, but his project World Bicyclist: Capture The Flag has since taken definition.

Now 29, Schroeder is closing in his goal to bike in every country in the world. His website, photographs, and meticulous travel and gear logs reveal an experienced traveler. We caught up with him on the heels of a trek through Asia, just as he’s about to fly to Ghana for a tour of West Africa.

GearJunkie: Can you tell us about yourself? Where did this ‘Capture The Flag’ idea come from?

Patrick Schroeder: I’m a 29-year old German cyclist/athlete/person who enjoys the great outdoors. It started as a one-time project but has now become my main profession.

After school and military service, I traveled once around the world, then started with bike tours, did Germany to South Africa, Germany to China and back, and Argentina to Canada. By now I’ve been to 141 countries and hope to visit the last remaining ones soon.

What gear, if any, have you had with you in every country so far?

There is no single item I own that has been everywhere, since things happen to break, get lost, or are replaced with new or better alternatives.

Though, most of the time I carry an ebook reader with me, as well as a mini chessboard. It’s great to interact with people, since the rules are the same worldwide and you can even play if you don’t share a language.

What bike are you on now? Why this bike? 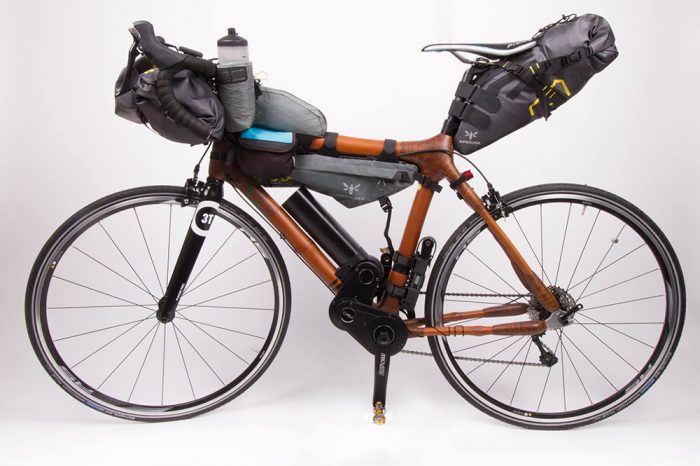 It’s a custom MyBoo Densu, a bamboo-framed road bike with a Relo engine. The frame is made in Ghana; the bike assembled in Germany. I chose this bike, since bamboo is something new to me, and because I like faster, lighter bikes.

What bikes have you used previously?

All kinds of bikes, from a cheap city bike to a high-end road bike, full-suspension mountain bikes, folding bikes… you name it.

I try to change the type of bike I use once every year, to get a new experience from it. Of course, I could cruise on a classic touring bike, but that would be boring after so many years. I try to find a fitting tour for each. For example, with the Brompton folder, I visited island states, which require a lot of flights. Perfect for a tiny bike that costs nothing extra on an airplane.

What are some important things you’ve learned from all this bike travel?

1) The world is a much friendlier place than is portrayed on the news.

3) I can clearly distinguish between things I need and things I want. I think that’s fairly important in today society, which is richer than ever.

4) Time passes differently if you are constantly changing your milieu. It feels like a longer time, with more memorable events, in comparison to my breaks in Germany when I prepare for the next tour.

What are three of the most remarkable things or experiences you’ve come across?

The hospitality of strangers, especially in poorer countries or very remote regions. I’ve been invited so often, by curious or simply kind people, it’s easily the most positive experience I’ve had.

Another would be the landscapes themselves; be it frosty mountaintops, like the summit of Mont Blanc, the feeling of achievement when you reach such a goal, or the solitude of cycling alone through the Sahara at night, illuminated only by starlight. It’s fantastic!

What are five of your favorite pieces of gear thus far?

Apart from the ebook reader and the chess board, I’d say:

1) Apidura frame bags instead of pannier bags. Saves me 3-4kg.

2) GPS is a game changer. Of course today most people have it in their smartphone, but 10 years ago it was a novelty.

3) A small notebook. I like to write, make plans, even maps, and schedules; keep contacts and addresses in it. Never runs out of battery.

4) My ultralight tent, a Helsport Ringstind Superlight. It weighs less than1kg for a double-walled, mosquito-proof tent. Important to me, since I often travel in areas prone to tropical diseases. Like the West-Africa trip next, I have to look out for malaria.

5) A bicycle, it doesn’t matter which one.

What have you not done that you wish you did?

Climb Mt. Kilimanjaro, Aconcagua, and/or Mt. Everest when I was there. Kilimanjaro I didn’t do because they wouldn’t let me go solo, insisted on a guide.

Aconcagua I was near off-season. And Everest I can’t afford. But all three are now on my little list of things I want to do.

Where has the biking been the most difficult?

My previous West-Africa trip, due to the language barrier, the lacking infrastructure, and malnutrition. I lost quite a bit of weight and strength there. I hope my second tour in the area will be better.

We took a look at what Schroeder’s gear list from when he started bike packing (without much experience), and what it looks like now (as a seasoned, bike-packing vet). 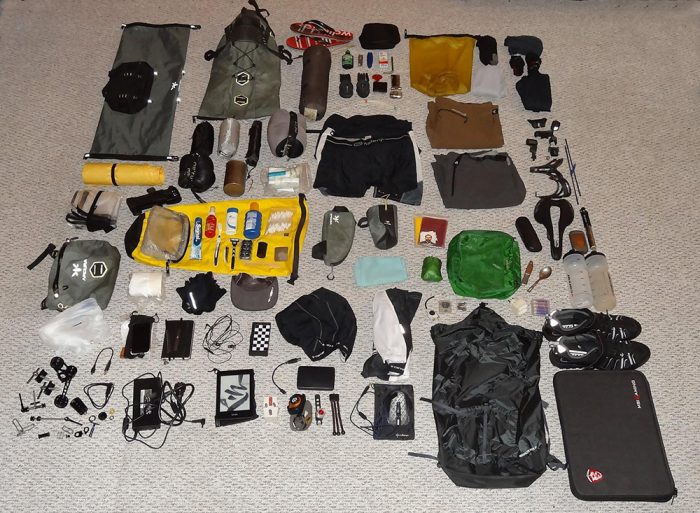 Up Next: Fezzari: A Custom Carbon Fatbike Under $2K

Saving…
Fezzari: A Custom Carbon Fatbike Under $2K
Stunning Nature Video Will Leave You In Awe
×