A bike that proves all high-end rides are not the same, the Scalpel-Si might be the fastest XC bike on the planet. 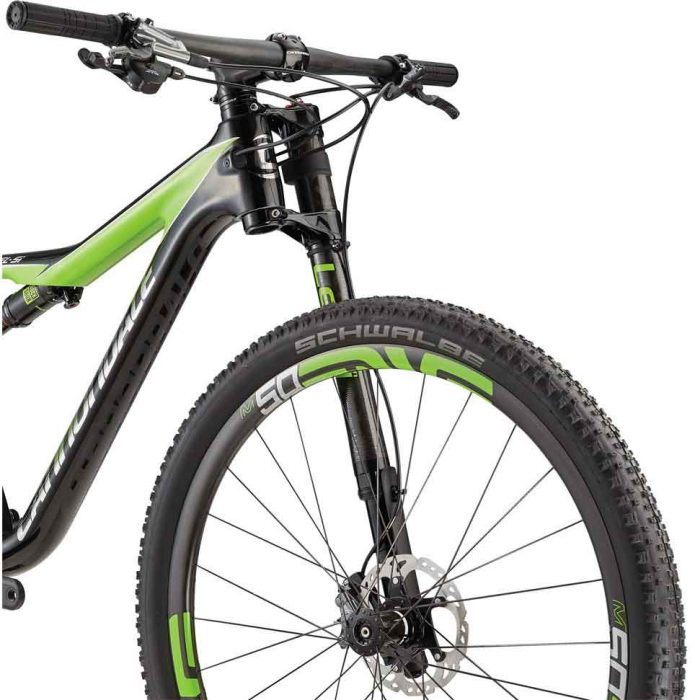 Cannondale’s Scalpel-Si race bike is like a supercar—so exotic it’s incompatible with standard parts and hard to work on. It is a short-travel carbon fiber frame with 29er wheels, but that’s where its similarities to the competition stops.

The single-arm fork is just one example of Cannondale spending money to design and patent its own parts instead of ordering from the catalogue used by other bike companies.

Today, there are hundreds of bike companies offering thousands of bikes. Some buyers are understandably frustrated when I say most bikes are basically the same. Generally, it’s a bunch of marketing speak that disingenuously sets them apart.

Not here, however. Cannondale’s marketing doesn’t lie when with claims it’s different. With this bike, it’s not only different. It’s also lighter, stiffer, faster, and better.

The front fork is Cannondale’s best example of what it does differently. The “Lefty” is awesome, tracking straighter than anything else, while also being lighter (unless you count undamped forks).

It has the best lockout, and needle bearings that don’t bind like other telescoping forks, so it works predictably, regardless of how hard it’s being flexed.

To top it off, you don’t have to take your wheel off to change a flat!

Complementing the front end is a more “slack” head tube. This means the fork puts the front wheel further in front of the rider so you’re less likely to go over the bars. But because it’s a custom fork, Cannondale increased the rake, reducing “floppiness” in the steering.

All this translates to the best front end of any cross-country race bike so far. This is the gold standard. 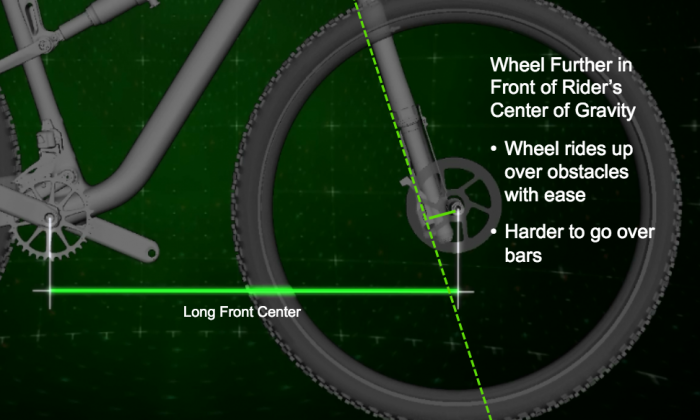 Another quirky engineering feat I like is Cannondale’s “Asymmetric Integration” concept that boosts wheel stiffness without increasing weight.

The brand accomplished this by moving the rear triangle 6 mm toward the drive side, pushing the chainring out to match, and re-dishing the rear wheel to keep the rim in proper relation to the frame’s centerline. Confused? Check out the image below. 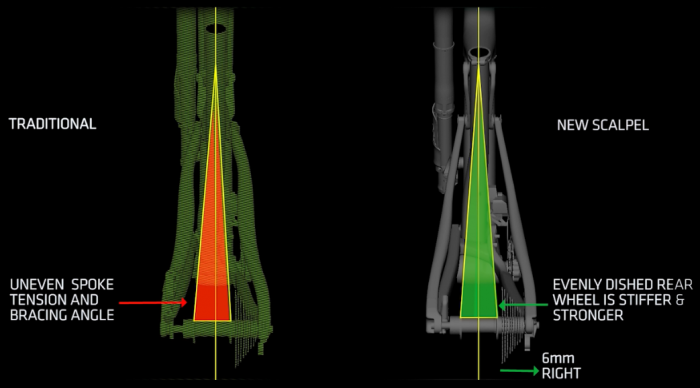 This makes the bracing angle of the spokes even, which is so damn logical it makes you shake your head when you see what everybody else is doing. The Ai not only makes the wheels stronger, but also allows the rear end to be shortened which is good for traction. It also allows for increased tire clearance.

Quirky Is Not Always Good

This is Cannondale’s fifth iteration of the Scalpel. The company is very far down the rabbit hole. The amount of engineering investment in this bike is big. The Scalpel does things no other bike can do in terms of stiffness, weight, and features.

But the Scalpel comes with some negative compromises in terms of compatibility and inconvenience when it comes to finding parts.

The Scalpel will not work with fork-mount bike racks (although adapters are available some). The simple task of taking off the front wheel to put it in your car is a considerable hassle because of the bike’s design (you have to remove the brake caliper).

Similarly, its rear wheel is offset to the right by 6mm, meaning it will rub the frame and brake caliper on any other frame. It should be noted that rear wheels can be “re-dished” for the Scalpel by any bike shop.

The same goes for fixing broken parts or upgrading the bike; it’s not easy. A broken part almost always means waiting for a shipment from Cannondale rather than picking it up locally.

The Scalpel races as well or better than the competition because it has tech nobody else has. The front end of this bike is the best in the world. There is nothing about the Lefty we don’t like in terms of how it rides.  Not just the Lefty, but the front as a whole.

This 69.5-degree angle is at the limit for XC racers. In the Scalpel’s case, it does not overstep the limit. It provides extra confidence for downhills while remaining nimble enough to dance through the trees. The lockout is an actual mechanical lockout that feels faster than everything else when sprinting.

The rear end of the bike is not as good as the front, but it’s snappy and light. The Scalpel uses what could be considered old technology—it’s a single pivot design—but is surrounded by a number of really good ideas exclusive to Cannondale.

The result is a bike that works well and remains super light. It feels less plush than bikes like the RKT9RDO and Pivot Mach4 because it isolates pedaling forces less well, but there’s nothing it’s bad at.

Even with two different front chainrings there is no gear combination that makes the suspension “wrap up” or otherwise show its Achilles heel. So although there are more modern designs of rear suspension out there, this one is well refined. In exchange you save some weight, so it’s a tradeoff that we see as reasonable.

The Scalpel has a solid list of small things we like that add up to a great ride quality. The bike clears 2.35-inch tires, has two bottle cages in the main triangle, great cable routing with no squeaks or knock issues, and rims that set up tubeless very easily.

What you get is a bike that is tied with Specialized and Trek in terms of raw racing speed, but with slightly more versatility born of slacker front angles, big tire clearance, and massive lateral stiffness.

Overall the ride is fast and fun. The bike goes to great lengths to be light, so we recommend the top builds more than the the bottom ones. Paying a premium for unique technologies is not worth it when paired with mundane parts (heavy wheels, for example).

We’ve already told you that Cannondale parts are generally unique creations, which creates compatibility issues. You’re going to want to be nice to your local bike shop (from which we recommend you buy this bike) because you won’t be able to get parts on your own.

The other shortcoming was not one we expected to see, but our long-term test bike weighed in at over 28 pounds (with tubes in the tires), which is too much for a top-end race bike that costs $4,200 (we long-term tested the Scalpel-Si 4, the lowest level build).

We recommend avoiding this model as a race bike. Step up at least one spot to the 3, which gets you upgraded wheels and integrated dual lockout, both of which will save you time on the course. I only had one day on the top spec model and its superiority was very clear. 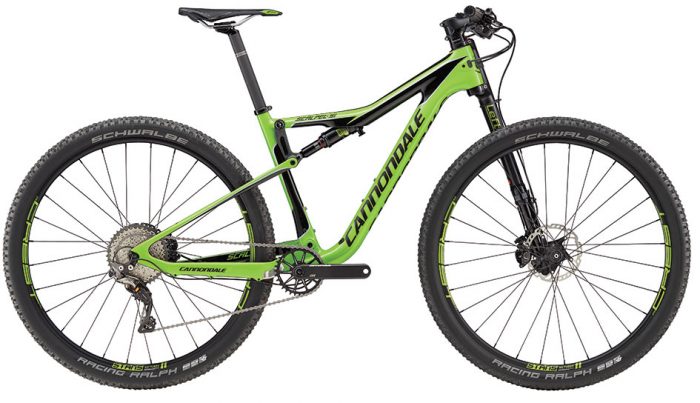 We were blown away.  We love it and recommend it to riders and racers in all areas of the country, whether mountainous or flat.

If you can afford the top-end models you’ll be right at the forefront of what is possible in a modern race bike, on what is likely the fastest race bike in the world.

Up Next: Road Biking Colombia: It Won’t Kill You (It’s Awesome)