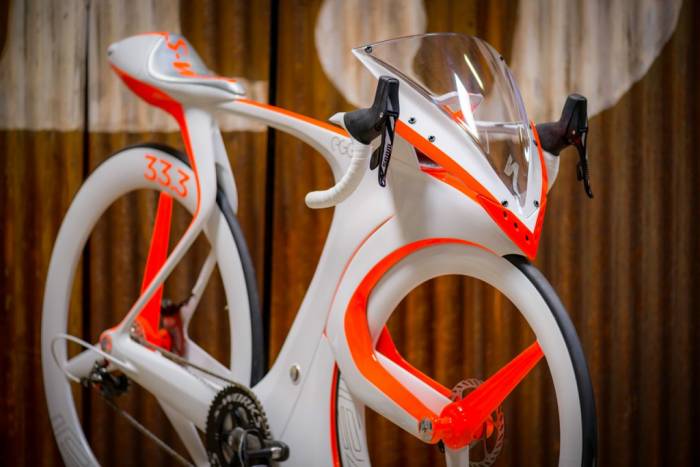 [leadin]The world’s governing body for bicycle racing, the Union Cycliste Internationale (UCI), just got slapped in the face by the future.[/leadin]

Specialized Bicycle Components’ creative director Robert Egger unveiled the “future bike” above, and it’s called the fUCI. It’s in the running as the sexiest, baddest bike to date.

Sexy because, I mean, just look at it! Bad because it successfully breaks almost every UCI rule regarding the design of racing bikes. It wasn’t named the “fUCI” by mistake.

Egger didn’t make the bike out of spite, though, but out of speed. “My feeling was let’s design a bike for someone who really just wants to go fast on a road bike,” he said.

Admitting that race bikes aren’t everything and that UCI regulations are limiting, Egger freely channeled creativity and innovation to design the race bike of the future.

The gigantic, 33.3-inch rear wheel is easily the most glaring conflict with UCI regulations. As if the size alone wasn’t enough, a motor located in the bottom bracket gets that massive wheel rolling.

Once it’s rolling it acts as a flywheel, allowing the bike to maintain a greater speed with minimal effort. A motorized, nearly 3-foot-tall flywheel… this alone is mega unique. But, wait, there’s much more.

The bike syncs with a smartphone. Once a phone is placed in a docking area, onboard sensors activate, allowing it to plan and help you follow routes, monitor tire pressure, warn of oncoming traffic, automatically turn on front and rear lights, and disable the bike when parked.

Other UCI discrepancies include, but are not limited to, aerodynamic fairings, a transparent windscreen, a cargo area, and a very unconventional (but damn slick) frame.

The Future Is Approaching

According to an interview with Egger on Specialized’s Very Special Things site, the bike is “all about what could be, not what it necessarily is right now.”

Though the bike is more of an idea than a market-ready steed, we’re excited about what could come of futuristic smart bike concepts such as this monster of the road.