Early on in this video, a friend said of McNulty: “His trail to being a professional mountain biker has begun.”

Eh? See what he did there?

But even dad jokes can’t eclipse the awe of watching McNulty on a mountain bike. While the young gun supports himself by detailing cars, he uses the cash to turn heads with performances at Proving Grounds and Freeride Fiesta. Canyon Bicycles’ film team followed him to Oregon and Utah to capture spectacular slo-mo footage of McNulty’s obvious talent and style.

“The moment I realized Ryan McNulty has that full package, the ‘X Factor,’ the staying power to make it somewhere in this sport, was when he showed up to Proving Grounds [2021] on a borrowed bike,” freeride legend Cam McCaul said in the vid. “And no guarantee that he was going to be allowed into the competition.”

Last year, McNulty was an alternate rider for Rampage and ultimately didn’t compete. According to this vid, it’s only a matter of time before he’s on the start list.

Check him out in this stunt-packed edit, and draw your own conclusions. 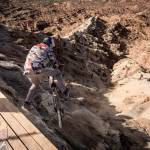 Did you miss Rampage 2022? If so, you skipped out on three wild podium runs. Catch up on all the event highlights right here. Read more…