Home » Water » How To Packraft (And Not Die)

I’m not going to die. Or so I tell myself. I’m huddled on a rock ledge in the Alaskan bush, crumbly cliff above, whitewater below. 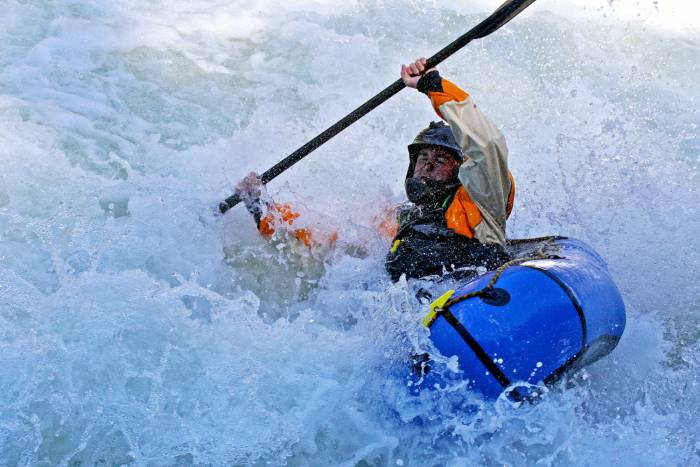 I can’t see my friends and I don’t have bear spray or even a granola bar. And now, Lord help me, it’s raining.

This is my introduction to packrafting, a sport that takes its name from durable boats small enough to fit into a backpack yet capable of navigating class V whitewater.

In Alaska, where packrafting evolved, an adventurer with a two-pound raft and a breakdown paddle can hike, bike or ski deep into a river’s remote headwaters, then inflate the boat and paddle back to civilization. But as rivers become increasingly crowded and permits more elusive, packrafting’s popularity has expanded beyond Alaska’s backcountry.

It’s hard to gauge just how much the sport has grown; pioneering manufacturer Alpacka Raft won’t release official numbers. But founder Sheri Tingey says that in 15 years, the company has  grown from a single employee to 15 people. Meanwhile, the overall number of packraft manufacturers has jumped from one to nine. The National Outdoor Leadership School offers packraft courses, and tourism companies rent packrafts to basically anyone.

Packrafts are easier to paddle than hardshell kayaks, and inherently cooler than bulky, old-fashioned inflatables. They “are to kayakers what snowboarding was to skiers two decades ago,” says Brad Meiklejohn, president of the American Packrafting Association, which formed in 2009 and now has 1,900 members in 40 countries.

At $1,500 or so for a high-quality setup, though, they’ve also become a more expensive way for inexperienced people to get on the water. “Packrafts make it easy to get into trouble,” Meiklejohn says frankly. “They’re an idiot-friendly craft.”

I’m an OK whitewater kayaker, so when my friends Jule and Steve invite me to try packrafting near Anchorage, I assume I’ll swiftly master the more forgiving sport. I’m disappointed when I learn we won’t be tackling some remote river we’d have to hike miles to reach, but figure that since I’m here to cover the sport’s growing popularity in the Lower 48, paddling a road-access river in Alaska makes sense. Plus, how much trouble can I get into with a highway nearby? 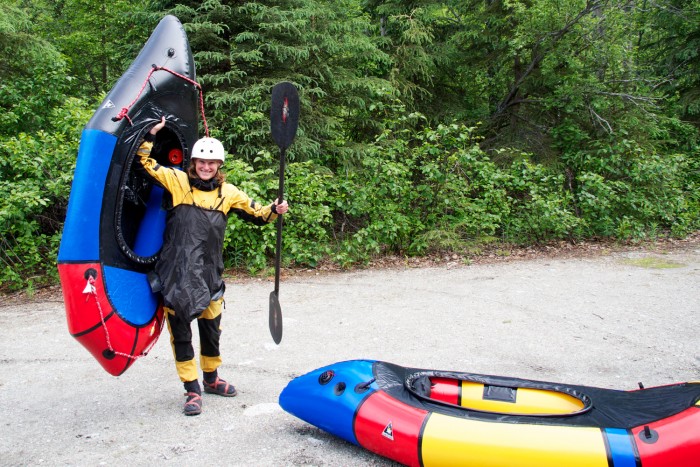 On a sunny June morning, we load up Jule’s Subaru and head into the vast boreal forest that rolls out beyond the city. I squeeze into my dry suit as suavely as one can squeeze their head through a rubber gasket, which is to say I appear as though I’m being birthed by a rhinoceros. Before long, we’re paddling down class II rapids in brilliant sunshine. The float ends without incident. We high-five. Then Jule asks if we feel confident enough to run the upper section of the creek, which is class III-plus. Gamely (stupidly, one might even say), we agree.

This time, as we push through the forest to the river, the roar of the whitewater is deeper. We climb into our boats, snap our spray skirts into place and bounce through a rocky, foaming drop, off boulders that could have easily tipped a hardshell boat. “This is fun!” I holler.

We drop through a few more rapids. Clouds build overhead. Then I paddle into a hole and find myself upside down, popped out of my packraft and swimming. There’s an eddy of calm water on the right; I swim for it, gulping air and water in equal measure. Distantly, I hear Jule yelling for me to swim left.

In the eddy, heart pounding, I stand up and realize why: I’m cliffed out. If I want to get downstream to where Jule (I hope) has rescued my boat, I’ll have to cross the river. So I jump back in the frigid water, aim for an eddy on the opposite shore — and am immediately swept downstream. Just before I’m pulled into another ugly drop, I manage to haul myself onto a dinner table-sized ledge, where I sit for an unknown period of time contemplating the increasingly rain-sodden abyss of my own mortality.

Then Steve’s head appears through the tangle of green bushes above. “Jule thinks you should swim,” he says. “She’s waiting for you below.”

So while Steve dashes off to get a rope, I MacGyver a climbing harness out of my PFD and a carabiner. When he returns, I tie in, take a breath, and toe onto a microscopic foothold. Then in what feels like the bravest act of my life, I swing out into the void, suspended for a split second over the whitewater. Steve grabs my hand and yanks me up into the bush.

“YOU’RE THE STRONGEST MAN IN THE WORLD!” I scream.

Afterward, drinking a beer at the take-out, I wonder if Meiklejohn was thinking of me when he called packrafts “idiot-friendly.” But he’d also said that, despite their hardcore reputation, packrafts today are just as often used for casual floats in front-country lakes — something you can keep in your car and inflate whenever you feel like getting on the water. Next time, I’ll stick with that.

–This story was originally published in High Country News.

Up Next: Man Rides Motorcycle On Breaking Wave