The BioLite FirePit+ gives you all the thrills of a portable campfire, without the smoke and mess.

As a perpetual truck camper, I find myself weighing the pros and cons of a campfire a lot. Most times, in light of the hassle or risk of a ground fire, I layer up and opt out.

The new FirePit+ ($250) tips the scale toward the pros. Lots of pros. Its well-enclosed design, battery-enhanced airflow, easily cleanable finish, and ability to host a killer BBQ have transformed my fire life in the best of ways. Here’s why.

In short: BioLite’s FirePit+ has a lot going for it, so much so that it was worth follow-up testing to see how much it differs from the original 2017 model. The materials, mesh walls, and battery pack all saw improvements. On top of that, its capability to serve two functions — toasty fire for warmth and streamlined grill for cooking — means you really can’t go wrong.

Flying embers seldom penetrate the FirePit+’s new mesh walls. And paired with the optional BBQ lid, it’s easy to keep a fire safely contained without suffocating it. That allows me to host one on the deck of my sailboat (see below), at my tailgate, and in areas where I otherwise wouldn’t feel comfortable having a fire.

At 27 inches long, 13 inches wide, and around 20 pounds, the legs fold up to make it small and light for transporting but large enough to hold a quality-size fire.

Also, the carrying handles don’t get too hot, which helps with putting it out or repositioning the pit while in use. Clean-up is easy thanks to an ash port in the base with a removable door. 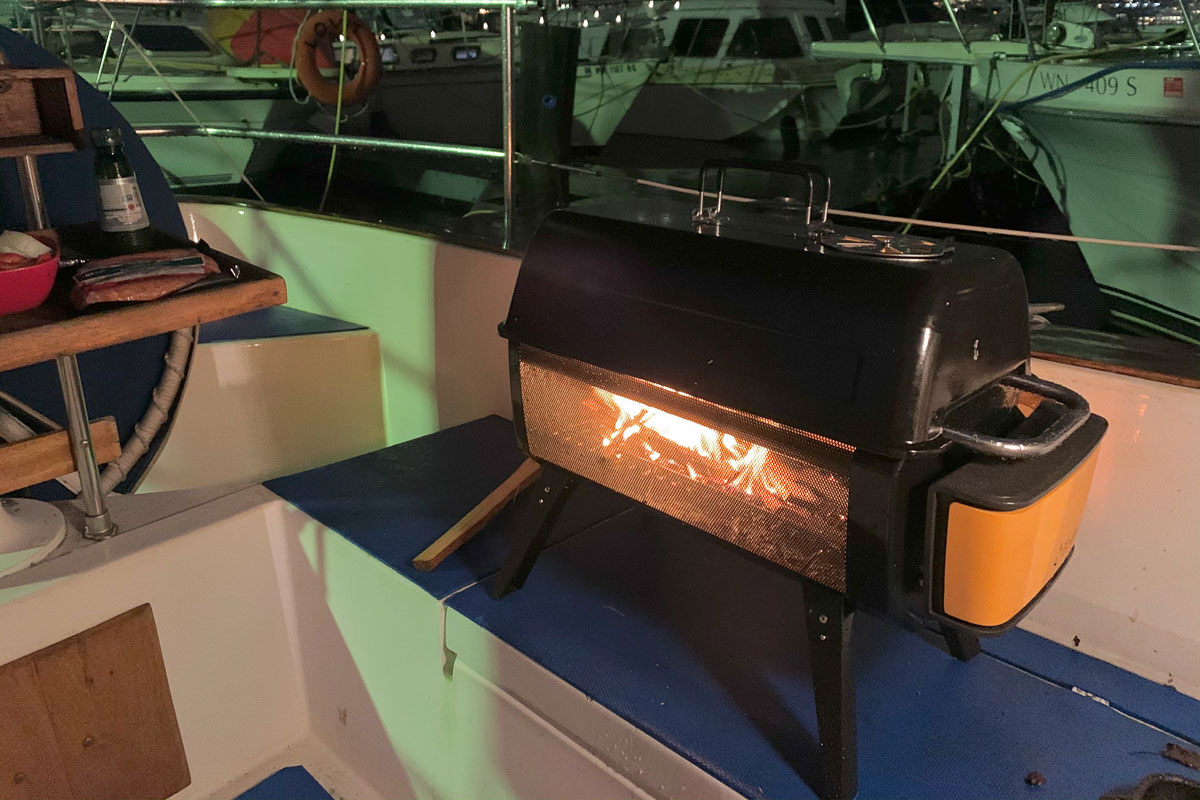 The BioLite FirePit+’s mesh walls also work to block out wind and weather. Once the fire is lit, the pit’s simple aeration system makes it easy to control and keep alive by piping air through strategically positioned ports beneath the fuel rack.

Its battery attachment powers a fan with four modes — modes 2 and 3 for a roaring fire, 4 for a quick burst to reignite a dying flame, and 1 for keeping a slow-burner burning smoothly.

The aeration system feeds the fire ample oxygen, which makes for a hotter fire and, in turn, less smoke and less smell clinging to my clothes.

The ability to quickly and easily go from pit to skillet really ties the room together. The unit comes with a grill grate and works well with charcoal or wood, making for an easy-to-use hibachi-style grill.

But the 2017 model already had a grill grate, you may be saying to yourself. And you’re right. But its BBQ capabilities weren’t nearly as honed as they are on this model.

And the FirePit+ does it well. It’s the hit of the campsite. Or the parking lot. Or the beach BBQ. Last time I used it, we made fajitas for lunch in the parking lot of my ski hill between hot laps. 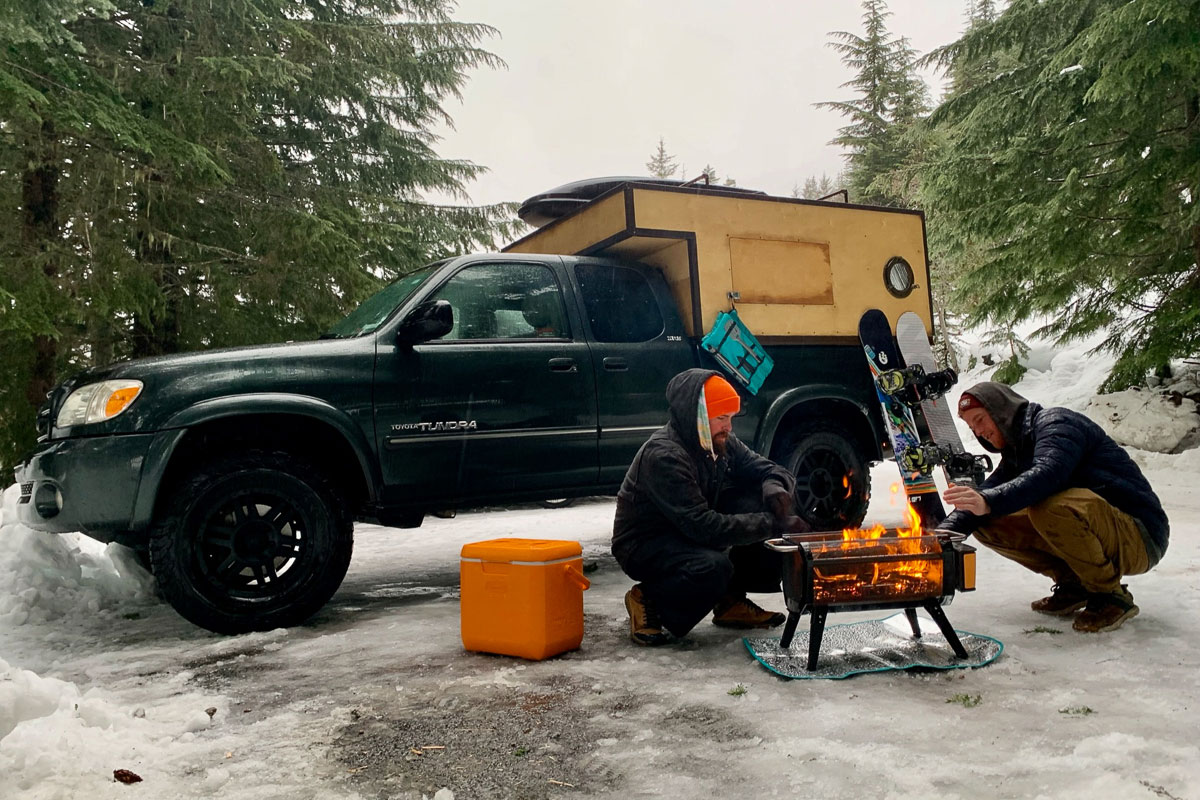 The smoke doesn’t magically disappear as advertised, but the airflow does help minimize it drastically once the fire gets going.

Also, the door on the ash port in the unit’s base fully detaches and can shake loose during travel. This made a mess for me once, but it was my fault for not cleaning out the ash before stowing the unit in my truck.

A Note on the Battery

Biolite says the battery lasts 30 hours on low, 14 hours on medium, and 7 hours on high. But because I tested a pre-production model, I’m unable to verify. That said, the battery even got low on me, and I’ve left it running overnight and in the rain on multiple occasions.

The pack has a USB port for charging other devices. It’s powered via a micro-USB port that sits on the side next to the light-up battery indicator and mode gauge.

The BioLite FirePit+ isn’t a far cry from the original FirePit, but it does feature a few key upgrades. First off, the mesh holes integrated into the body design are larger, enabling the unit to radiate more heat.

It’s also coated in a new, high-temperature enamel for durability and easy cleaning. And the unit runs off a 12,800 mAh battery as opposed to the previous version’s 10,400 mAhs for longer run times.

But the real upgrade is in the new optional cooking accessories, particularly the skillet and lid. These are game-changers for quality grilling.

And, as mentioned, the grill lid also comes in handy for containing a wily fire. At $250, the FirePit+ is hard to beat for a portable fire pit.

If you’re looking for a similar option, the Solo Stove Bonfire is another likable smokeless fire pit, albeit less portable.

Cold-Weather Car Camping: Gear to Enhance Winter on the Road

There’s no better litmus test for how much I’ll use a piece of gear than a wintertime car camping trip. Check out our cold-weather camping favorites. Read more…