Eight hand-planted posts dotted with hooks — doesn’t sound like much of a park to most people. But to a #HammockLifer, this public hangout is a dream come true. 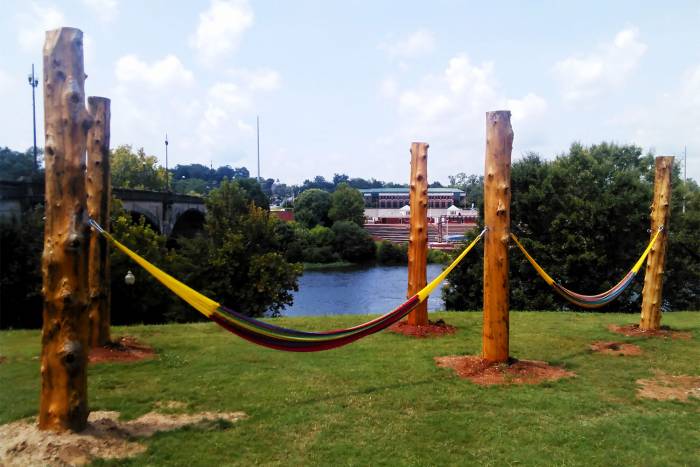 Until recently, Woodruff Riverfront Park in Columbus, Ga., didn’t stand out as anything spectacular. It has a walking path, a playground, and open, undeveloped green space. It was pleasant and simple.

But following a 2016 Knight Foundation grant to develop an “urban glen,” the park now stands as a veritable monument to #HammockLife. The park’s mission: Encourage people to meet and connect, while cleaning up city-owned properties.

Eight posts standing some 10 feet high have anchor points tailormade for hammocks. The stands look out on the Chattahoochee River. It’s the beginning of a public project, launched from a $4,400 grant, to create an inviting space with lights, trees, and even permanent hammocks.

Phillip Trocquet conceived of a public hammock space when he was the Columbus City Planner in 2016. He submitted the grant proposal as part of the Knight Foundation’s Cities Challenge.

The challenge reviews ideas to improve any of the Foundation’s 26 communities. The criteria is broad, and winning ideas range from Columbus’s hammock park to a ‘Slow Roll’ community bike ride through Detroit. 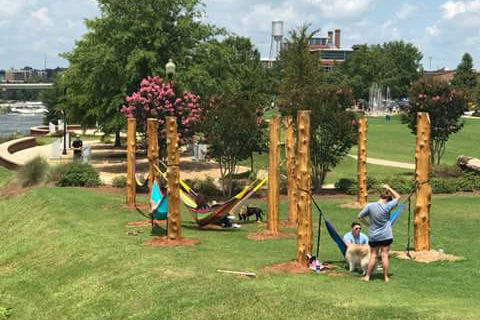 In all, $5 million in grants fund dozens of winning projects.

Trocquet created renderings and plans before moving on to work for the city of Tyrone. With the $4,400 award, the city cleared the area, planted the post, and set up hammock hanging hardware.

The project development wrapped up this spring, and Columbus planner Logan Kipp, who works on the park, announced to the Ledger Enquirer, “People can go out and string hammocks up right now. It’s open.”

With ENO’s Nomad Hammock Stand you don't need trees, suspended bliss can happen anywhere. Hang a hammock at the beach, in the yard, or even in the living room. Read more…

Last November, New York City launched a public hammock square, but it offered no greenspace. And in certain parts of Chicago, hanging a hammock in public requires a permit.

Up Next: Relax Anywhere With ENO Nomad Hammock Stand