If you can’t look at a cam or carabiner without feeling inspired, you need to check out these unique pieces of wearable art.

Climbing is an art. But climbing also inspires art. From climbing wall holds to trad gear, the stuff of climbing carries its own inherent beauty.

And this list of climber-artist double-threats helps give form to the art within this sport. Here are four talented individuals that create climbing-inspired jewelry in four different mediums: plastic, glass, metal, and upcycling old gear. 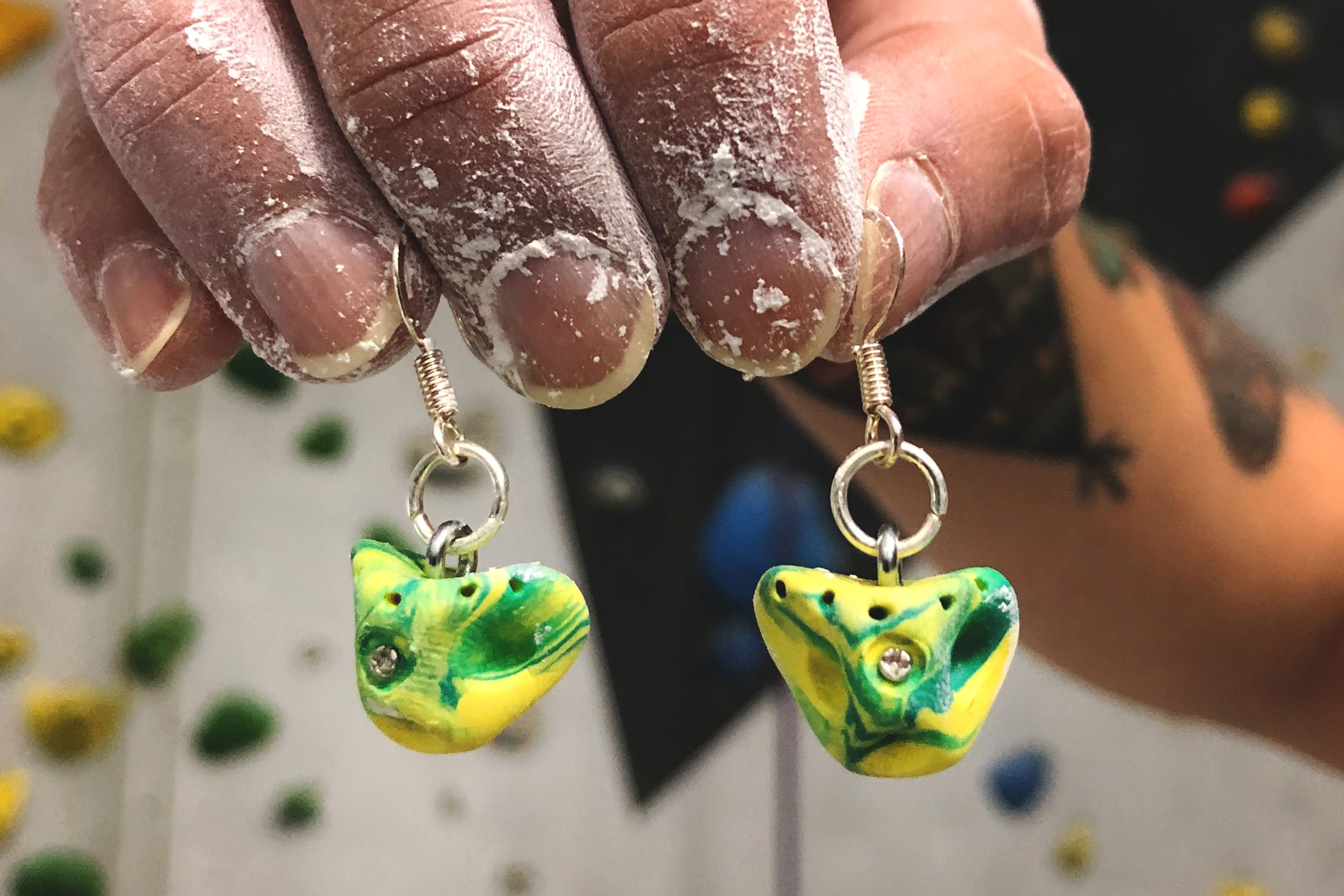 The inspiration for Tiny Holds began earlier this year after Berkstresser’s search for earrings that mimicked indoor climbing holds resulted in a dead end. The Los Angeles climber saw this as an opportunity to take matters into her own hands. So she began experimenting with homemade molds of crimpers, jugs, and rock rings until she found the perfect colorful, look-alike creation.

Motivated by friends, Berkstresser began to sell the designs in person and online. In only a few weeks, her online sales reached a prosperous success; everything she posted sold out almost instantly. If she’s not restocking her inventory, Berkstresser is most likely at the gym making V5s look like V0s.

You can find Berkstresser’s wares at LA’s Sender One Climbing Gym or on Instagram and Etsy. 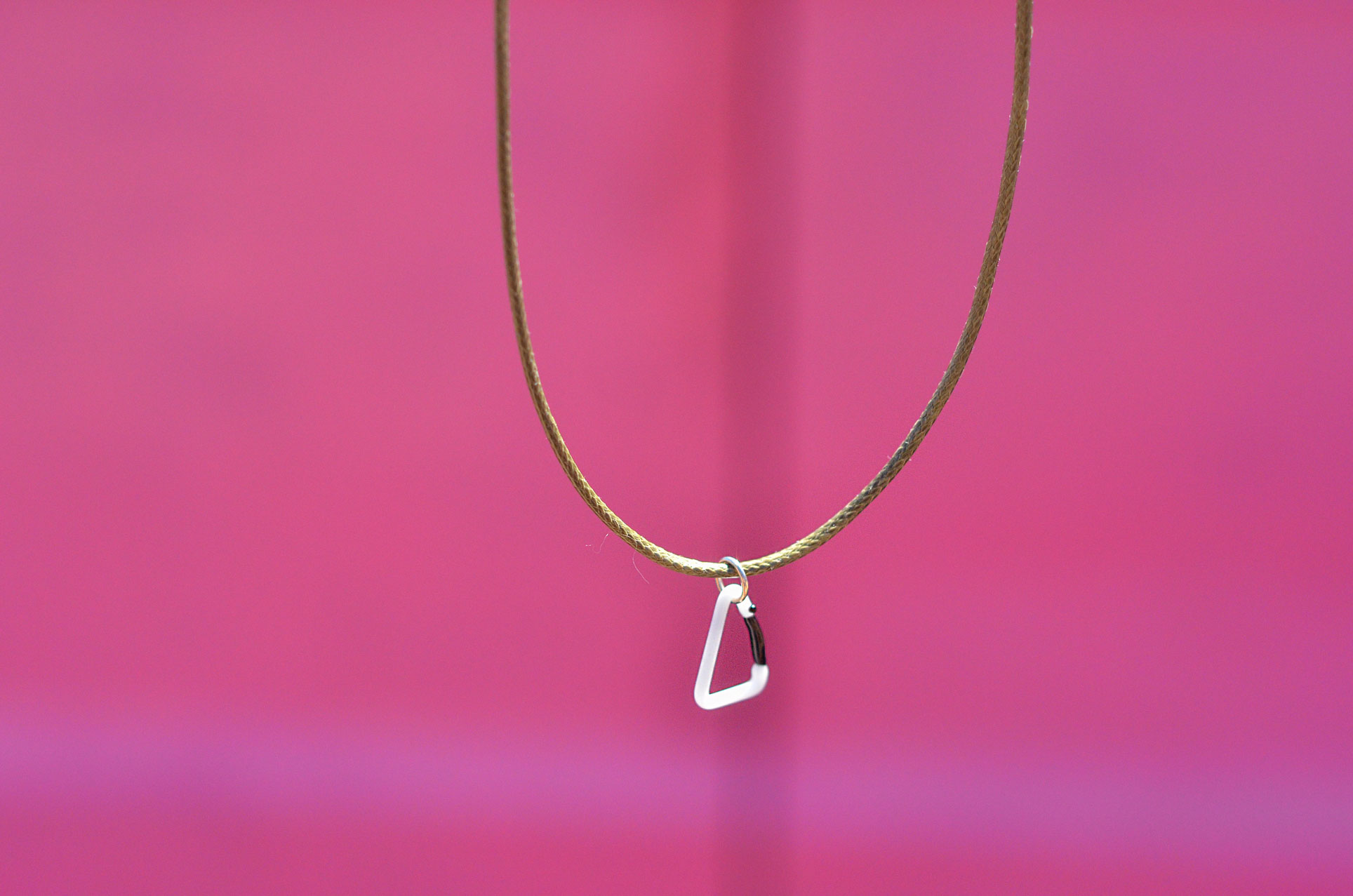 If you’ve ever met a polish girl with a pink van, quad rack, and a trusty sidekick huskie, then you’ve met Maja Sowa. Though transient by nature, the most common location you’ll find Sowa is blowing glass in a broken-down bus in the middle of the desert. Here, the artist uses a small burner to meticulously handcraft each of her glass pieces.

Inspired by her love for climbing, Sowa blows tiny glass versions of gear, including carabiner charms, quickdraw earrings, and even ATC necklaces. Note that this artist won’t shy away from a challenge, so don’t be afraid to reach out and ask for a customized piece of glass. 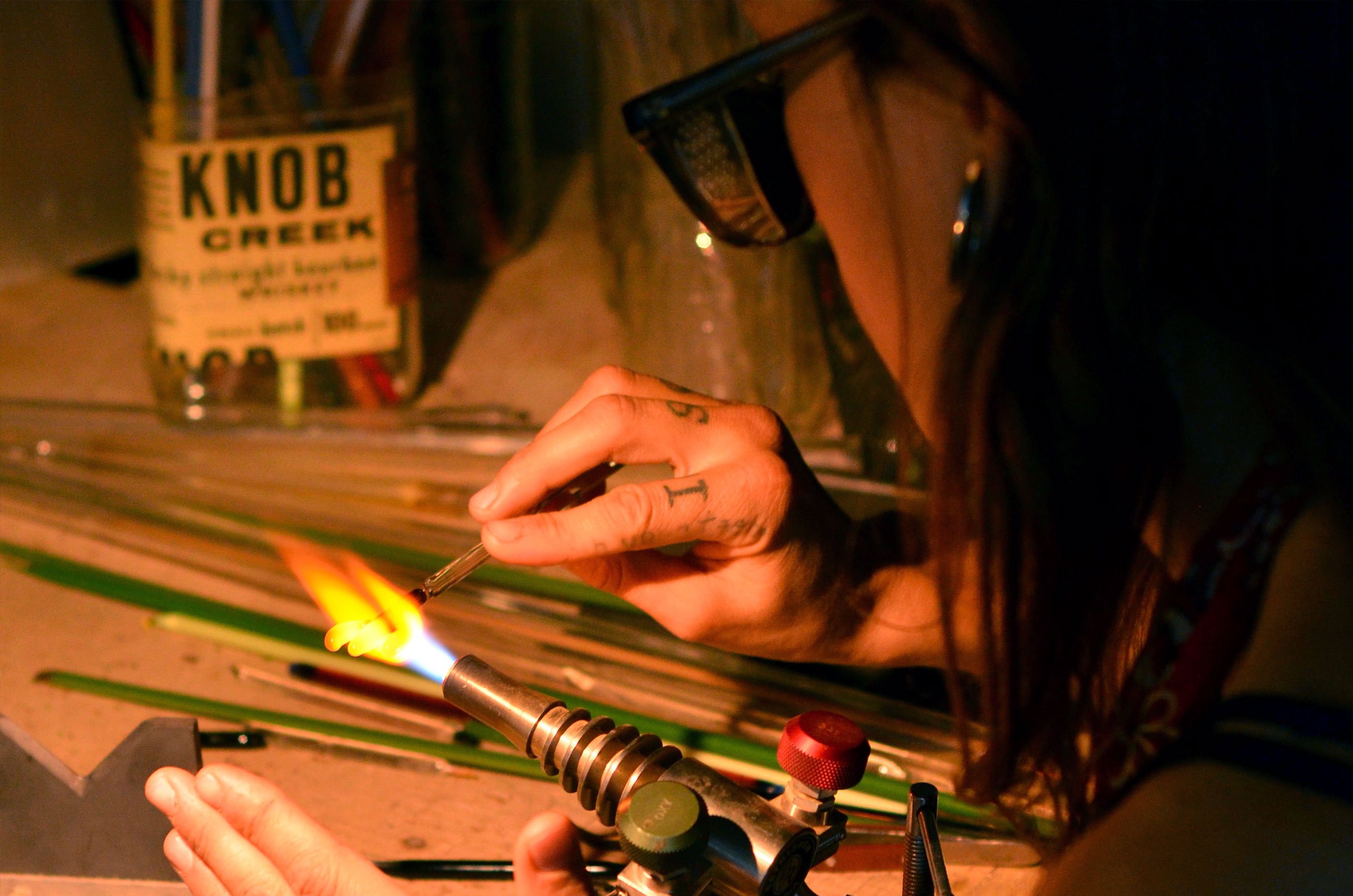 As for the pink van? Years ago, Sowa purchased a typical van, only to spray it down with a layer of hot pink paint. The vehicle is now unmistakable in the regular lineup of white sprinters at the crag.

Purchase Pink Van Life on Instagram. Or, if you’re in Moab, Utah, get it at Moab Garage Co. and Moab Made. 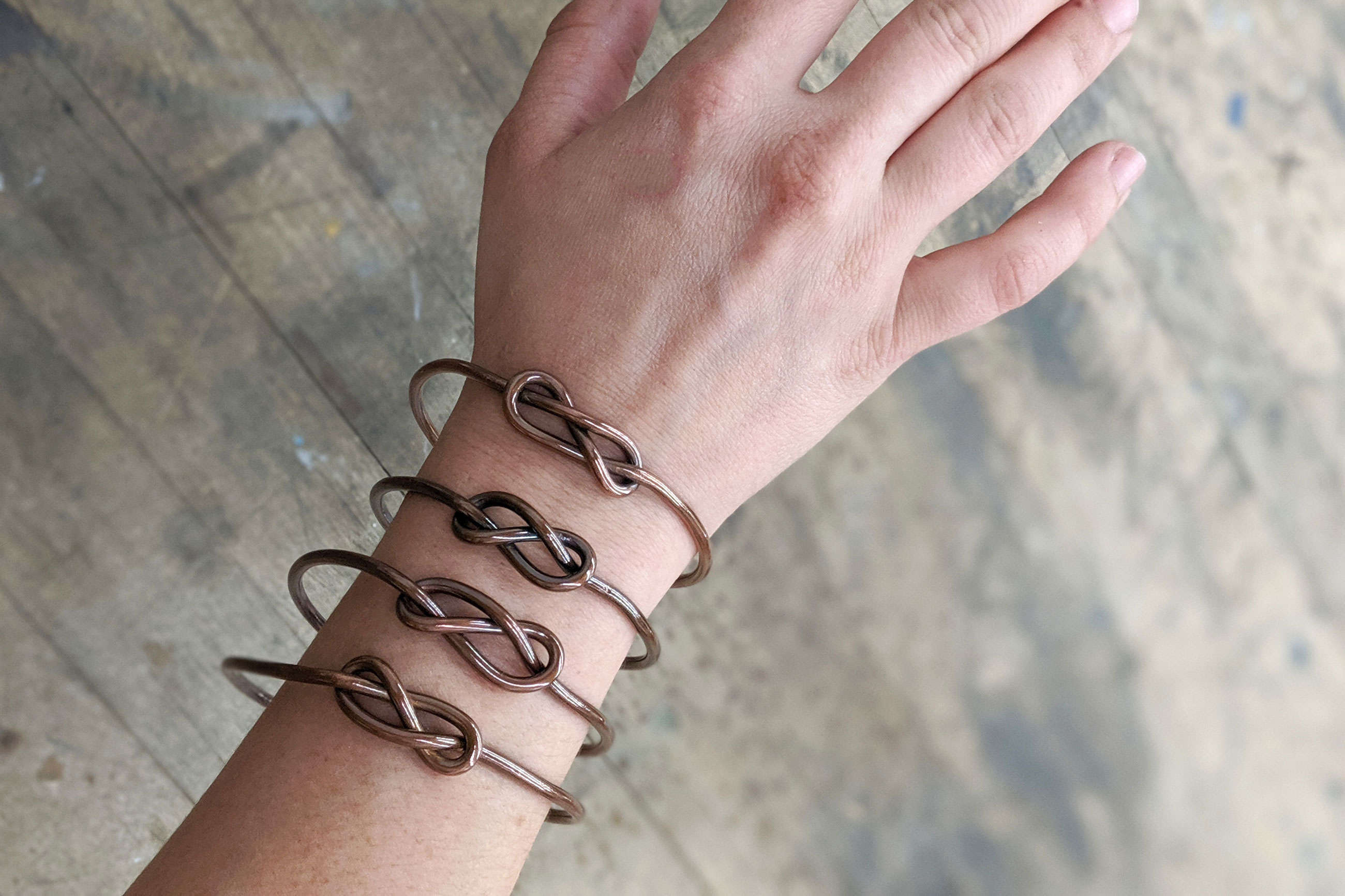 It was love at first climb for Jacqueline Perry back in 2017.

At the time, Perry was already an experienced metalsmith with years of experience under her belt. When rock climbing became another passion, there was no question the two interests would collide in a fiery, creative, rock explosion.

While living at the Red River Gorge in Kentucky, Perry began crafting brass dog tags shaped like carabiners. Other climbers were impressed by the creative craftsmanship and wanted bling for themselves instead of their dogs. The popularity of her work quickly escalated.

Continuing to pull inspiration from climbing, she began to craft metal quickdraw earrings that every sport climber in town fell in love with. The collection expanded to nut tool necklaces, figure-8 bangles, and climber girl charms (but the sky’s the limit with custom orders). 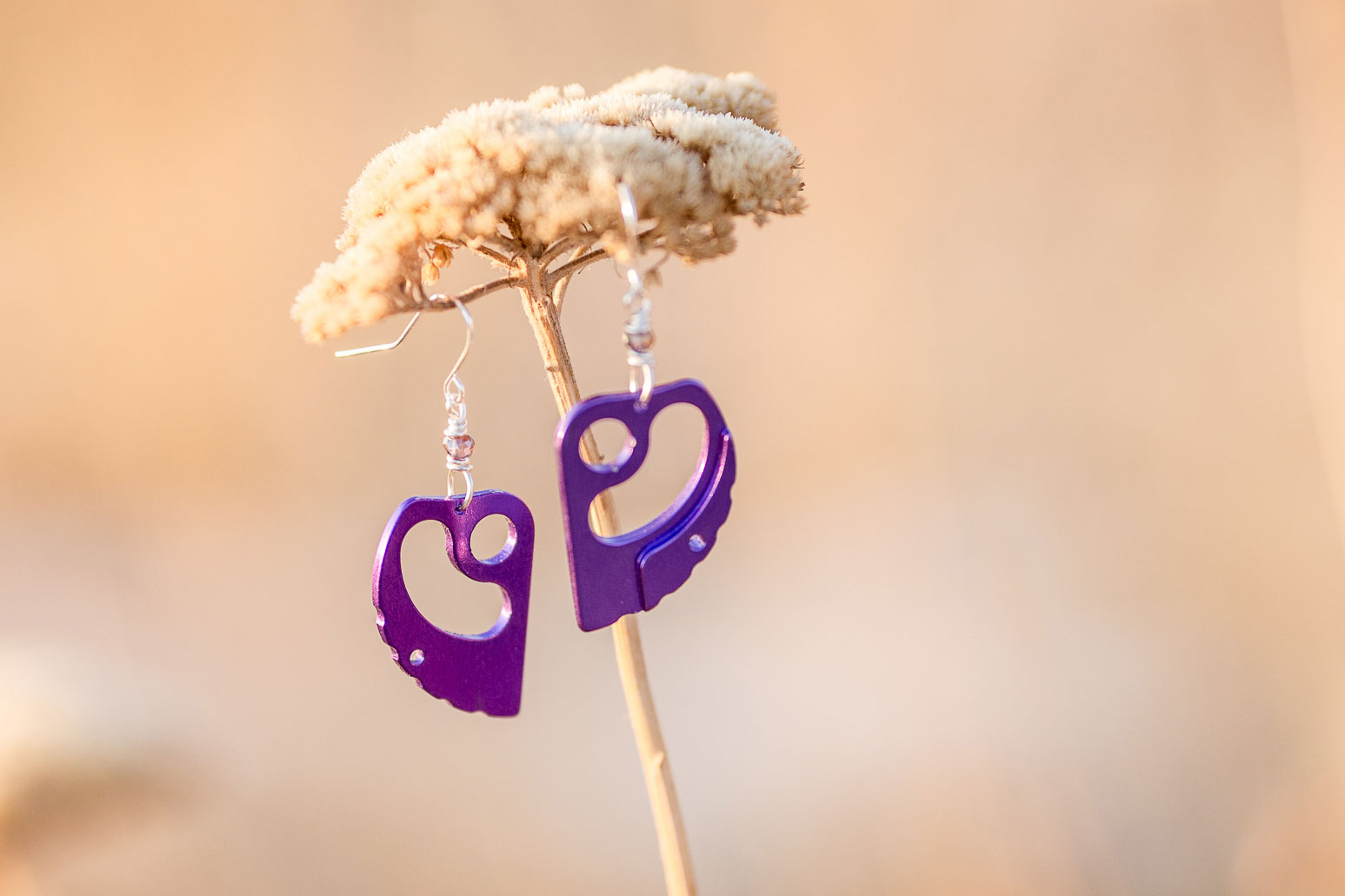 What do you do with broken camelots? If you’re Polly Dacus, you turn them into a set of irresistibly cute cam lobe earrings.

Back in 2012, a friend of hers in the climbing industry had a collection of old, unusable cams without future plans for the gear. Luckily, Dacus had an idea. She took the cams and upcycled them into jewelry holders, wind chimes, and ornaments. But the clear standout of the creations were the cam lobe earrings.

Her blue 0.3-inch earrings caught the attention of other climbers who wanted a pair, so she founded the company Breezy Desert Designs. The sizes vary from small silver micro-cam studs to green 0.75-inch creations and everything in between.

To keep the earrings light, Dacus found a machine shop to cut the aircraft-grade aluminum in half, so these might just be the sturdiest earrings you’ll wear while rock climbing.

Up Next: Emily Harrington Injured on El Cap, Honnold and Ballinger Help Evacuate