Adam Ondra grinds stone into sand at every crag he visits with his steel fingers and iron grip. Apparently, they have a similar effect on plastic.

If you don’t think the world’s best rock climber also gets the blues, think again. Adam Ondra recently competed internationally in front of his home crowd for the first time since 2009. He missed out on the finals that year due to a “really stupid slip.” In his new video titled “Drama to Get the Gold,” the then-16-year-old is visibly shattered.

Fast forward more than a decade, and the Czech rock wizard marshals a little more maturity. Exhibit A: his haircut has changed. It’s been a while since we’ve seen full ‘fro Ondra, and “Drama’s” black-and-white intro is a charming refresher of simpler times.

But one thing about Ondra hasn’t changed: his ability and drive to demolish hard climbs.

Watch the current iteration of the loudest and most accomplished rock climber on the planet vying for gold at the 2022 European Boulder Cup. And if you stay tuned until the end, you may tear up a little bit at the crowd’s final ovation. 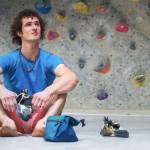 Adam Ondra Gets Vulnerable, Trains for the Olympics in 'Beyond Focus'

Watch Adam Ondra flex in melodramatic slow-motion — and dissect the nuances of the sacrifice that training requires — in ‘Beyond Focus.’ Read more…