The Italian rock stud just chalked up and pulled onto Adam Ondra’s ‘Silence,’ the world’s first 5.15d, for the first time. And he promised to document the whole process.

If Stefano Ghisolfi sends “Silence,” he’ll be the first climber to repeat the first route graded 5.15d. The Flatanger, Norway, route first went up in 2017 at the hands of Adam Ondra.

Since then, nobody’s even sniffed a second ascent. When Ghisolfi announced a siege effort on the king line last week, it came along with an extraordinary commitment: to document and broadcast the entire climbing effort via social media and YouTube. 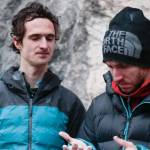 In this short entry to the 'Climbing Diaries' series, we see what it looks like when Stefano Ghisolfi and Adam Ondra rally and redpoint. Read more…