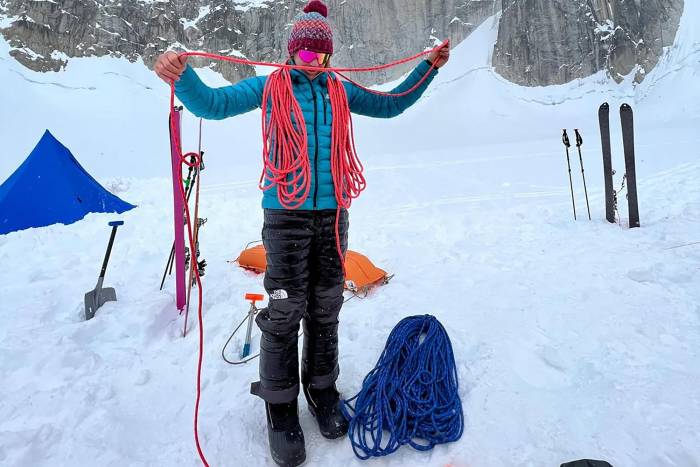 Climbing ropes keep getting skinnier, and Sterling has joined the party with its thinnest rope yet.

The company recently debuted the Dyad 7.7, an ultra-lightweight and super-skinny double/twin-rated rope. These ropes are to be used together as twin ropes, either clipping each piece of protection simultaneously with both ropes or clipping alternating pieces as half ropes. Despite the size, it maintains durability, the company said, offering reliable protection for the “minimalist climber.”

This 7.7mm rope comes with a waterproof certification from the UIAA, the International Climbing and Mountaineering Federation, in addition to its double/twin rating.

Sterling also designed the Dyad with its XEROS technology, which it describes as a novel way of making waterproof ropes. While the traditional method involved applying a coating to the rope, Sterling added a “new step” in the manufacturing process, making each fiber water-resistant before technicians twist them into yarn. The rope’s yarn received a Bluesign certification for its sustainable raw materials.

It also passed a field test in Alaska during an expedition this summer by Sterling athlete Anna Pfaff.

Sterling enters the lightweight rope market with a couple of other big contenders already waiting.

Petzl offers a similar product with the PASO Guide 7.7, which also comes with a UIAA dry-rope certification for “technical mountaineering and ice climbing.”

But if you want the thinnest rope in all the land (as of press time), Edelrid takes the prize with its 7.1mm Skimmer Eco Dry. It meets the same dry rope standards; the 70m version sits right between the other two options in price ($10 more than the Dyad and $20 less than the PASO).

Pro climber Anna Pfaff took the ropes for a spin while climbing the Harvard Route on Alaska’s Mount Huntington this summer.

In an article for Sterling, she found herself “completely sold” on the Dyad’s feel, durability, and performance.

“They climb super well, are light, and don’t ice up in the cold,” Pfaff wrote. “The Dyad made it up and down Mount Huntington with zero problems, and it barely looks used! With over 30 pitches of climbing and just as many rappels over rugged alpine terrain, the Dyad is next level!” 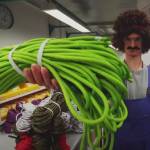 A Video Ode to the Nylon Climbing Rope

How are climbing ropes made? What can they do? (Answer: incredible things.) How do they do it? GearJunkie digs in, video essay style. Read more…