Turn the luggage area of your vehicle into a full-featured camper in under 5 minutes. The Egoe Nestbox is a camper system in a box.

The Nestbox is an all-in-one camper system that can easily be moved in and out of the cargo area of a wide range of SUVs, wagons, and vans. The system is made by the Czech company Egoe Nest and is about to make its North American debut. 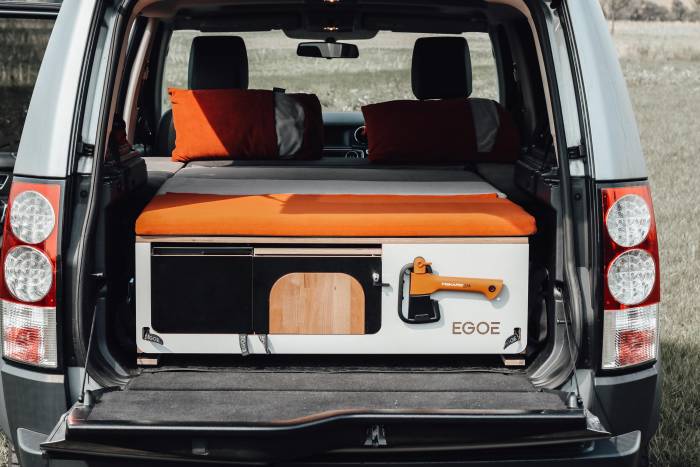 The main components of the Nestbox system are the kitchen and the bed. The kitchen consists of a two-burner propane stove, a sink and water system, some organizer drawers, and a 12-volt fridge. All of these items stow neatly into the cabinet box and fold and slide out for use.

Atop the box is the Nestbed. This bed system consists of a three-panel design that folds out over the stowed rear seats of the vehicle. It not only stores neatly above the Nestbox for transport but can easily be removed for day trips. 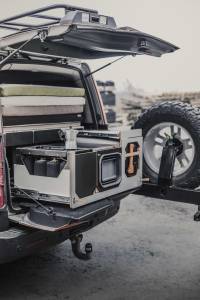 Egoe offers the Nestbox in four models. The smallest version is the Nestbox Camper (about $3,000), and the Nestbox Hiker model (from about $3,500) is just a bit bigger. The Nestbox Supertramp (about $3,900) is a big, full-featured model designed for the rigors of off-road travel. The biggest Nestbox is the Roamer (about $3,900), which is most suited for compact van applications.

Along with the various Nestbox models, Egoe Nest also offers a full line of accessories to complement the camper-in-a-box system. Of course, it offers products to outfit the Nestbox, like 12-volt fridges, Fisker hatchets, and more. It also offers accessory bags for the rear windows of vehicles, called Nestbags, and even matching pillows to the Nestbed mattress called Nestpillows.

For van applications or SUVs with space, it even offers a folding table/storage box, called the Nestblock.

Czech-based Egoe currently makes Nestbox systems for a wide range of vehicles, but most are European models not on offer here in North America. There are, however, Nestboxes for the Land Rover LR4, Subaru Forester, Subaru Tribeca, Volkswagen Passat, and Volvo XC60.

The big news is that the ever-popular Jeep Wrangler looks to be the next vehicle to get a Nestbox. By the pictures supplied, the Wrangler looks to be getting a full-featured Supertramp model. While specifications haven’t been released yet, we’d expect the Wrangler Nestbox Supertramp to weigh in at about 175 pounds and cost in the neighborhood of $4,000 based on European specifications. 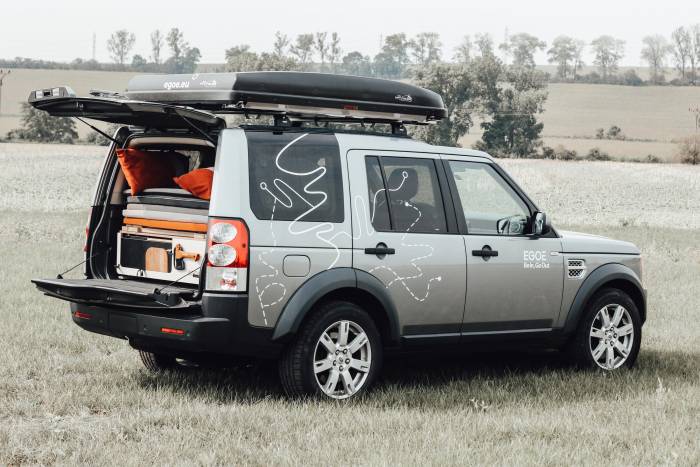 We also think the Nestbox will fit in a wide range of SUVs, wagons, and vans on offer here in the U.S. Egoe will just have to test fit these models before updating its fit list.

If this sort of system is right for your adventuremobile, then also be sure to check out the Ququq camper-in-a-box system as well. The Ququq system is very similar to the Nextbox system, but it’s executed differently and fits different vehicles.

Egoe was scheduled to debut its Nestbox system to the North American market at Overland Expo West in May. But the expo is postponed, as the COVID-19 epidemic has quickly shut down most events for the next few months. We might have to wait just a bit longer to get our eyes on these cool camper-in-a-box systems for ourselves.

Up Next: Winnebago Suspends Production of RVs, Boats