The renowned mountain runner Kilian Jornet last month summited Everest twice in one week. We sat down to talk with him in Chamonix, France, to learn more.

Kilian Jornet was back home in Chamonix, relaxed, casually chatting with his Salomon teammates below the serrated silhouette of the Mont Blanc massif. His frame small, his personality unassuming.

For those not in the know, you would be hard pressed to pick him out of a lineup as the guy that barely a month ago summited Everest not once, but twice inside a week with no ropes and no supplemental oxygen. 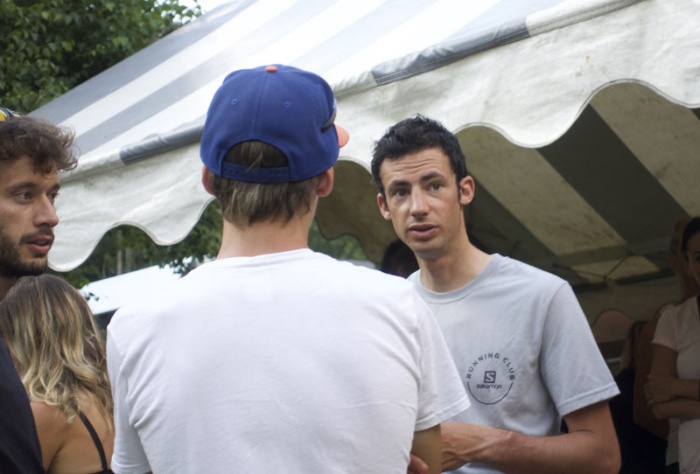 The quintessential mountain athlete, Jornet has spent a lifetime mastering his mountain skills, first as a ski mountaineer, then as an ultra and mountain runner. In 2012 Jornet turned it up a notch with his “Summits of My Life” project, applying his minimalist mountain running style to mountaineering.

With Mont Blanc, Denali, and Aconcagua complete, Everest was his crown jewel.

In the month since Everest, Jornet’s presence skyrocketed from being well-known within the ultra scene, to being one of the hottest athletes in the world. Everybody wants a piece of him.

Sitting on a media panel at a post-race venue, GearJunkie bellied up beside the undisputed king of the mountain as part of an informal discussion.

The interview with Kilian was gathered from a two-part discussion with questions asked by Trail Runner, Outside, Gear Patrol, Everyday Outdoor, Competitor, Elevation Outdoors, and GearJunkie.

PANEL. Do you feel like you’ve recovered from Everest?

Kilian Jornet: It was a very short expedition. It was 28 days from door to door … we were like 10 days on Cho Oyo and then like 17 days on Everest, with very short travels between. From the summit to training was like 3 days … we could start training early and recover early. 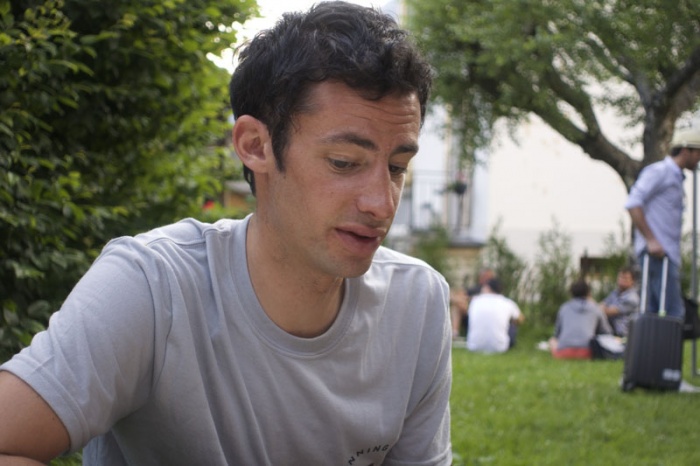 Have you suffered at the Everest level previously in the mountains before? What did you learn about your ability to push through or overcome challenge?

Suffering is … never objective. It’s a feeling. There are a lot of different ways to suffer, mentally or physically. On Everest, there were tons of both. You could suffer one time from the cold but you acknowledge afterwards that yes I was feeling cold …but didn’t get frostbite and I didn’t die.

So next time you are in this situation, you are familiar and don’t suffer at the same level like the time before. You can feel confident in situations where before you were afraid.

I suffered from stomach cramps … but the suffering was exactly the same as if it was at home. The only difference was I was on Everest.

But I knew I didn’t have edema and I was well acclimatized … I wasn’t cold, so it wasn’t a problem and I knew that I would not die from a stomach cramp. I just needed to go slower and stop more times. 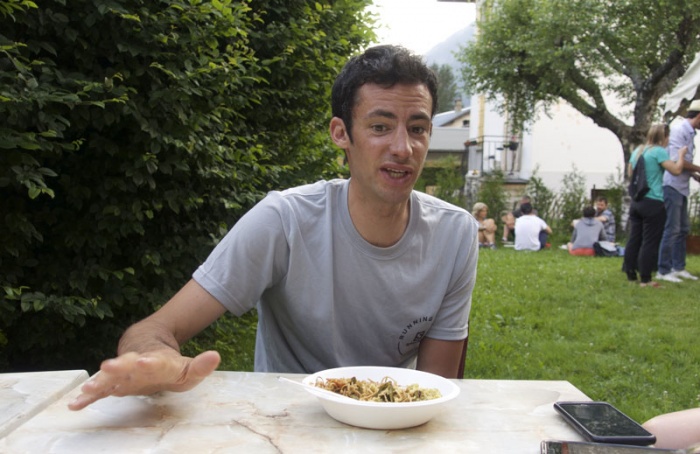 How much of a lifetime of suffering was helpful on Everest?

It gives you confidence in new situations. In the last two years, I’ve been trying to put myself in uncomfortable situations to build confidence, like 20-30 hours alone in the mountains.

At the moment you are able to take away any emotion, then you are ready. If you have euphoria or are happy, you are more likely to make bad decisions because you will not see all the risks. If you are scared, you will panic or start to lose control.

You need to be able to ask yourself if you can technically and physically do the climb. If you can, you can evaluate the true risk and make a rational decision. The only way to get to this point is to spend hours and hours preparing for these situations. It’s a sort of meditation, but you come out with more knowledge for future experiences.

How much water did you bring while climbing Everest?

It’s always a compromise. You don’t want to carry too much weight. But you need fluids. I took two liters of water … but one froze.

Going down, for the last 15 hours, I didn’t eat or drink anything because it made me throw up. Without eating and drinking, I just had the pain but wasn’t throwing up.

For the second time on Everest I brought four hydration flasks … and two froze. 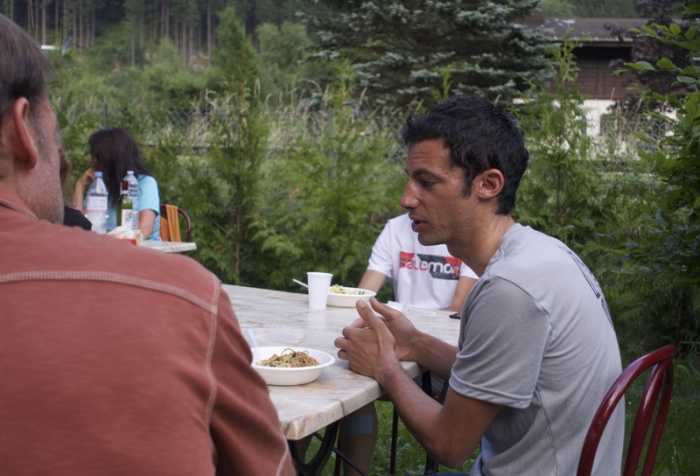 You are known for innovating gear; for Everest, what did you bring that we might see in the future?

We started thinking about the footwear for Everest on my trip to Denali. We wanted to have a running shoe that we integrated into our layering as I went higher.

We needed a system that was flexible for the approach, but something that we could layer for insulation and would be rigid enough for wearing a crampon. The average climbing boot weighs 42 ounces, crampons weigh 28 ounces, an approach boot weighs another 35 ounces. Our entire system weighed 38.5 ounces for everything.

The same tweaking was applied to my down jacket, ice axe, and backpack. I was able to go to Cho Oyo and Everest with a 50-pound kit. 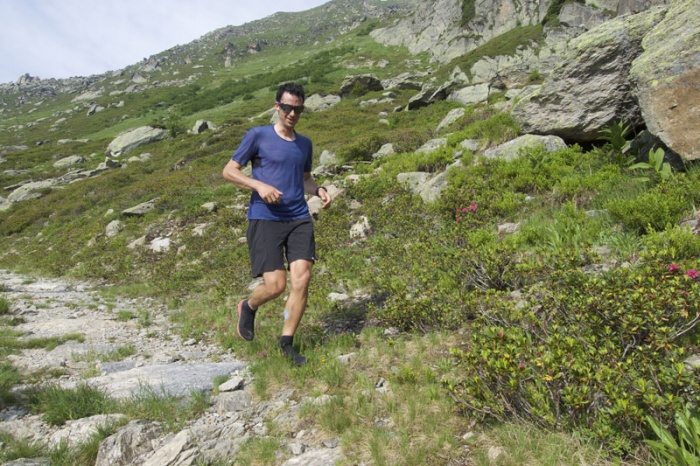 I’ve been training by myself since 17-years-old. I studied sports science in school to understand the basics.

November through May I’ll ski two to four hours in the morning, followed by an hour in the afternoon. In the summers I’ll go on longer run or climbing in the mountains, anywhere between two to three hours, up to nine to 10 hours.

But I also like to try a bunch of different things, like go without eating for five days while training for five hours a day. I like to explore training at the extremes to learn more about my body. 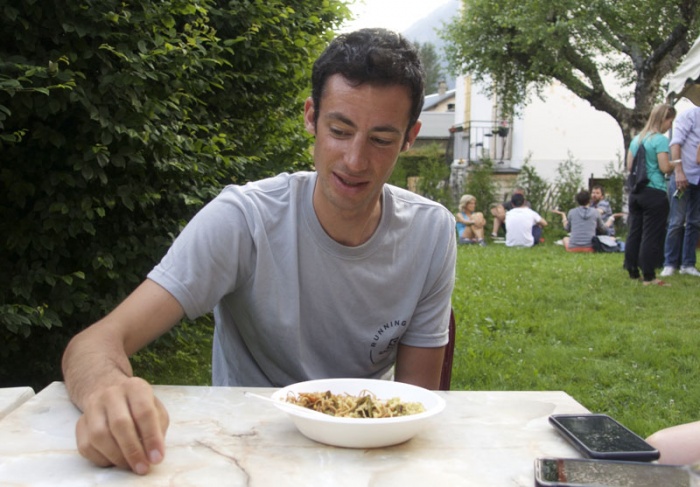 The first climb we did a round-trip from Advanced Base Camp. But it was more interesting to me to do it in the style that I did … I learned that it was possible to recover or potentially change summits. I was proud of learning how to acclimatize and train, and learn that it’s possible to climb in the Himalaya like you do in the Alps.

One of the world's best ultra-runners scaled Mount Everest today, pushing the limits of what is humanly possible. Read more…

Do you think you will go back to Everest?

I don’t know about Everest, but I want to go back to the Himalayas. There’s so much to do. It was a success to go and learn that my body can perform at 8,000 meters without spending two months at basecamp. But I don’t know if that will be Everest or other things. 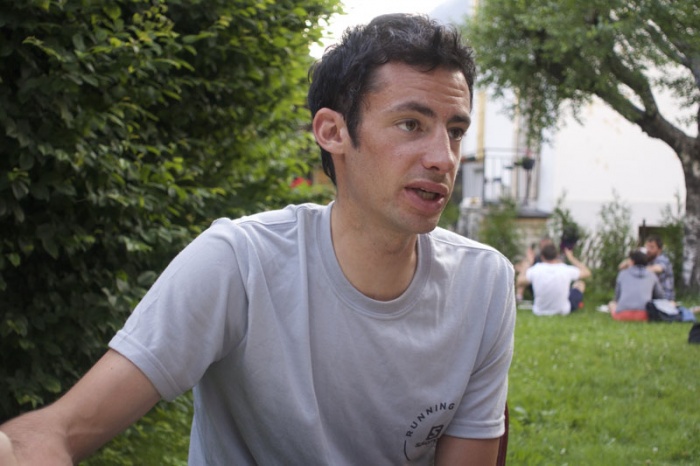 Is there a bucket list trip or adventure that you want to do?

It’s always evolving … that’s the problem! The more big things you do, the more ideas come … my list grows.

I don’t like to specialize … I’m happy doing big mountains and expeditions, and mixing it up with a short race and long race … and skiing in the winter. It helps me grow physically and emotionally. I would really like to go to Pakistan, Alaska, [and] Greenland has big potential.

Looking back at the 17- to 19-year-old Kilian, how have you changed? What’s next?

I’m still competitive, but I was more focused on winning when I was younger. I used to rest the day before a race. Now if the weather is good in the mountains, I’ll just go climbing the day before.

Because of experience, I can keep [in] shape. I see racing as training to stay [in] shape. It’s good training. It’s not my priority, though. Everything has similar priority.

Kilian shared that he’s taking the rest of his summer easy. Of course, this doesn’t mean he’s slowing down.

After we chatted, Jornet toed up to the line at Sunday’s Marathon du Mont Blanc, setting a blistering 3:45 pace to take the win. Next month he’ll be in Colorado to race Hard Rock 100 followed by the Sierra-Zinal and races in the UK and Scotland, doing it the only way Jornet knows how: Exploring his limits and having fun all the while.