The Torrent 2 is a crisp, snappy update to the original. And it maintains its role as HOKA ONE ONE’s race-ready trail shoe.

Grippy uphill and forgiving downhill, the Torrent just got its first update in 2 years. It fits differently but continues to be the brand’s most responsive off-road option we’ve tested so far.

We took the Torrent 2 around the neighborhood hardpack and dirt as well as into the mountains with rockier, looser trails. And we tossed in a long hike with the occasional jog on flatter portions. Throughout all these terrains, the slimmer profile felt like a speedier trail shoe that still offered ample protection around, and especially under, the foot.

In short: Prioritizing responsiveness over padding in the toes gives the shoe more bite, especially uphill, and the more HOKA-like heel minimizes missteps on rocks or roots. This update to a HOKA classic is worth it given the blend of comfort and function. 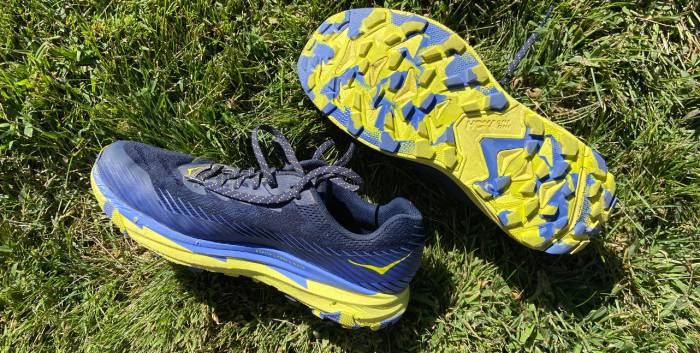 What’s New in the Torrent 2?

We liked the original Torrent and so did plenty of other runners. Perhaps that’s why it’s been a minute since the debut.

HOKA changed to Unifi REPREVE (recycled) polyester in the mesh upper, which is thin and seamless. In its first iteration, the Torrent received criticism for the fit of its upper. In this version, the fit is more narrow and streamlined (compared to other HOKAs), and the laces lock down the fit with the upper’s overlays.

The sole has realigned multidirectional lugs in the middle, with slightly larger, angled lugs around the edges. In testing, these felt more grippy in corners and on uneven terrain.

Gone are the design callouts of the original’s TPU overlays. They’re still there, but now they blend in with the upper’s aesthetics. Another style change is the removal of the first Torrent’s angular protrusions from the sole’s sidewalls.

We kicked up plenty of dust and the occasional loose rock before deciding these are best for running fast on tidier trails.

Stacking just 18 mm under the toe, the Torrent 2 is one of HOKA’s lowest-riding shoes. The fit and shape of the forefoot make these nimble on flats and climbs, while the fatter heel provides a cushioned ride on downhills.

It’s just enough stack to allow for the Profly midsole to absorb and rebound impact under the toes, and then put more cushion under the heel. When landing on our forefoots, this shoe proved very responsive. 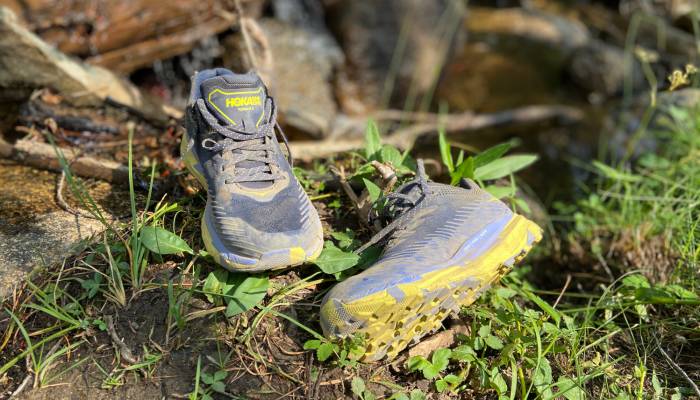 The toebox feels (and looks) slimmer than most HOKAs, though not as tight as recent Speedgoats. Yet the angle of the toebox isn’t as severe and didn’t pinch big or small toes. It also has a roomy volume.

On steep downhills, my toes never slid down into the front of the shoe and never caught on the upper above them. During the long and steep hike up Mt. Yale, I noticed the low profile of the lugs and toe didn’t catch on large rocks. Yes, these are trail running shoes, but hiking in them for a day also revealed a lot.

HOKA ONE ONE Torrent 2 Specs

Who Are These For?

The Torrent 2 will appeal to HOKA loyalists who want a more aggressive and agile ride. And runners who are used to snappier shoes (like Salomon) but want more protection under the heel should consider these.

They’ll do well on hardpack trails with climbs and descents, or uneven terrain where foot placement is more important than just mashing over roots, rocks, or debris.

These Torrents are for faster and midrange trail runs. I wouldn’t recommend using these as a long-distance trail trainer or a crossover like the Challenger ATRs (which ride well on both asphalt and trails).

Check out the HOKA ONE ONE Torrent 2

Saving…
Best Outdoor Gear Deals of the Week
Today’s Bargains: 5 Deals to Get You Outside This Weekend
×