America’s iconic, throaty street motorcycle has its eyes on a younger, more adventurous demographic. And that begins with a proper off-road bike. 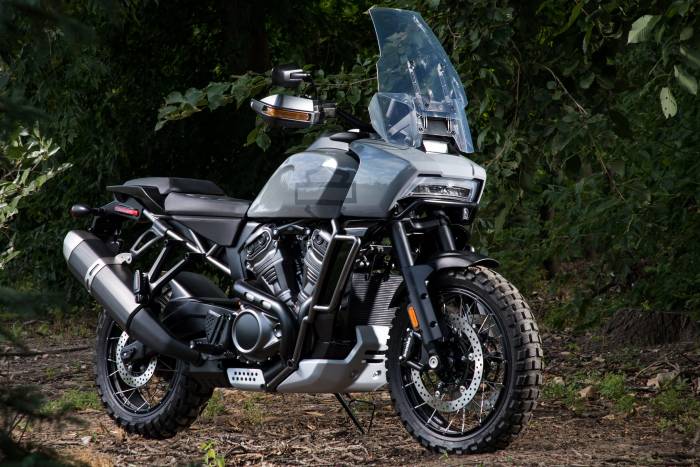 Despite starting life as a cutting-edge motorcycle company, Harley-Davidson has relied on loyal baby boomers and hipsters to carry it through a drought of innovation in recent years. The “More Roads to Harley-Davidson” plan aims to change all that.

One of the “roads” Harley is trying to entice new riders with is the road less traveled. In 2020, Harley plans to introduce the Pan America 1250 adventure touring motorcycle. This hefty-looking bike is designed specifically to compete in the big displacement adventure-touring segment and against the current king, the BMW R1200GS.

Harley has made large, comfortable touring bikes for a long time. Can it translate that long history into an off-road-capable machine? It aims to try with the Pan America 1250 release, then a slightly smaller 975-cc adventure bike by 2021.

Few details have been released, but from the lone video and photo Harley-Davidson released, we can come to a few conclusions. The Pan America is going to be a big motorcycle. Our best guess is a dry weight of 500-plus pounds. Jumbo gas tanks and wide, horizontal LED headlamps dominate the design in an overall look we can best describe as “chunky.”

The Pan America will have an upright riding position and wide, comfortable seat, well suited for long miles in the saddle. Its big 1250-cc V-Twin engine should be smooth and powerful, and it probably won’t sound like any other adventure motorcycle on the market. But Harley is sure to infuse its signature growl.

Brembo brakes should bring this heavy bike to a stop quickly. A height-adjustable windscreen should also help reduce rider fatigue when crushing highway miles as well as adjust down out of the way for off-road visibility and safety.

The Pan America does look to have the chops for proper off-road travel. Aggressive 50/50 tires wrapped on wire spoke wheels are what a big bike needs off the pavement, and this bike has them. A large skid plate to protect the V-Twin engine, hand guards, and a high exhaust all hint at the off-road capability of this machine.

If the jumping test rider in the video is any indication, the Pan America should have an off-road suspension that’ll tackle most terrain. I’m eager to get my hands on one and see what this big beast will do in the air and upon landing.

While the Pan America is going to be capable off-road, probably in a similar way to the BMW R1200GS, it will most likely see mostly Starbucks runs and cross-country highway travel. The integrated turn signals in the handguards help hint at this road bias. And those will be expensive to replace when you bump them into a tree on a trail or drop the bike while going over rocks.

Besides off-road-ready adventurers, Harley plans to attract over 2 million new riders worldwide to the brand by 2027. Its strategy, according to a press release, is to bring more than 100 new Harley motorcycles to market between now and then. A big part of that strategy is to expand its international business, aiming to create international sales that total 50 percent of its annual volume.

The press release also showed Harley will try to appeal to its core rider group with more big sport and touring motorcycles. Its plans include dabbling in the street bike and adventure touring markets. And the push will also hit a wide range of electric motorcycles.

In 2019, the first electric bike will be an upright naked style “no-clutch, ‘twist and go’” street bike called the LiveWire. There are a lot of companies attacking this space right now. So Harley will use its heritage and production capabilities to establish itself as the “leader in the electrification of the sport.”

Only time will tell whether Harley-Davidson can shake off its old-guy, biker gang image and create capable performance motorcycles across a wide spectrum of categories. I look forward to seeing the bikes on the road and, maybe even more importantly, what Harley’s competition creates in response.

Up Next: Truck Drawer System: How I Built Out My Pickup Bed