Mountain runner Cody Lind recently set an FKT on a quirky course covering Idaho’s nine highest peaks. He did the Idaho 12er challenge in a single day without rest. We found out how. 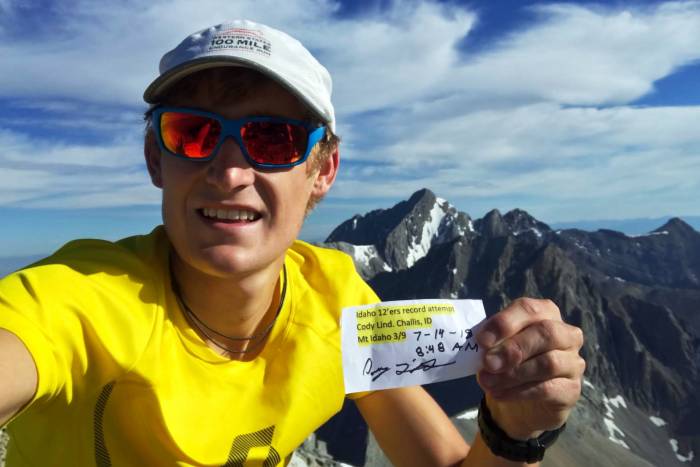 The feat bested the previous Idaho 12er route record by over seven hours, according to IdahoSummits, the website that tracks the state’s FKTs. Lind’s record is 20 hours, 23 minutes, 26 seconds.

Much like Colorado’s 14er challenge involving the state’s tallest 14,000-foot mountains, this is Idaho’s own unsanctioned peak-bagging challenge. It’s open to all who dare.

Along the find-your-own-way traverse, Lind, 23, gained some 31,000 feet and descended 28,000. To hike — let alone sprint — these rugged peaks takes some serious physical endurance, not to mention mental stamina.

We caught up with Lind, son of famed mountain runner and coach Paul Lind, about how he just speed-soloed the Idaho 12er challenge. 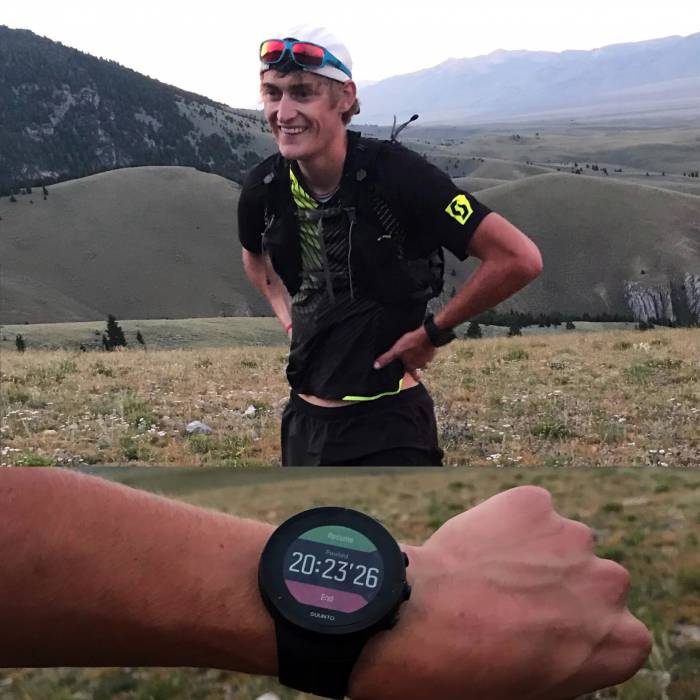 GJ: Starting out, did you really think you could run it that fast?

CL: Going into the attempt, my first goal was to try and break the previous FKT of 28 hours and 18 minutes. That was my No. 1 goal. In the back of my mind, I had thought about breaking 24 hours and wondered if it was possible.

I have run many miles with Luke Nelson, who had the previous record, and we had talked about what it might take for someone to go sub-24. We concluded that it could totally be possible, but everything would need to come together perfectly to do it.

What did you use to fuel before, during, and after the feat?

Going into the attempt, I made sure to keep everything as normal as possible. I started at 1 a.m., so I rested and fueled that entire day before. I used GU hydration drink mix throughout the adventure and ate GU energy gels every 45 to 60 minutes. [Note: GU sponsors Lind.]

Then I would supplement with a solid type of food. I ate a peanut butter and jelly sandwich every three to four hours, as well as a few Snickers and a couple slices of pizza. I had two Red Bulls as well. There’s plenty of snow above 11,000 feet, so I used runoff from this to take on water as well.

What piece of gear did you rely on most?

The SCOTT RC 3-Part Running Pole and three different pairs of Supertrac shoes. [Note: SCOTT sponsors the athlete.] On the talus side-hilling, the poles became key in order to move across the scree and stay upright. I also had a Petzel MYO (370-lumen) headlamp. 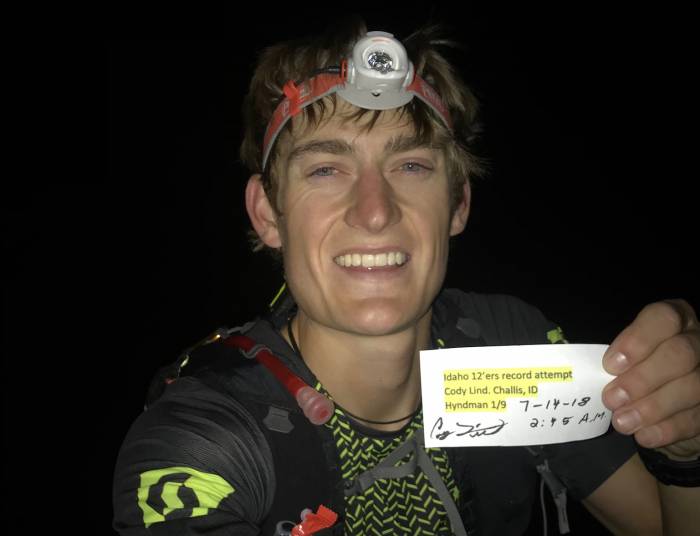 What did you use for wayfinding, and was that an issue at all?

I know my way around all the Lost River Peaks and traverses from years in those mountains, even in the dark. But I did wear a Suunto watch, had a SPOT Gen 3 on my pack with live tracking, and had my iPhone with the Topo Maps+ app that had all my previous routes on it should I need to alter any decisions on the fly. 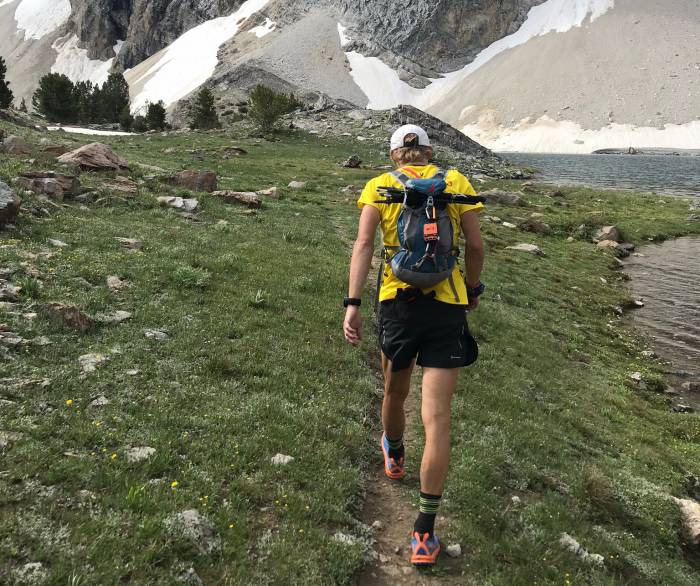 What was your lowest (and highest) point?

My lowest point was during the side-hilling traverse to Mt. Church. This section required a lot of focus going into it. I knew this was going to be the crux of the whole Lost River Traverse, and it lived up to it. I was taking in approximately 150 calories every half hour or so to keep fueling.

The highest point of the day was on Mt. Church after completing the side hill and a very technical and tough 1,000-foot chute. I knew that I had just completed some huge unknowns, and overall I was feeling good. I knew the exact routes for the rest of the traverse and knew that I could potentially pull off something special if I just kept moving at the pace I had been at, and kept safety my priority.

What tips do you have for others looking to attempt the route?

It all comes down to spending time and familiarizing yourself with an area. Spend time to get acquainted with the mountains, and practice many hours on the route before you attempt it. 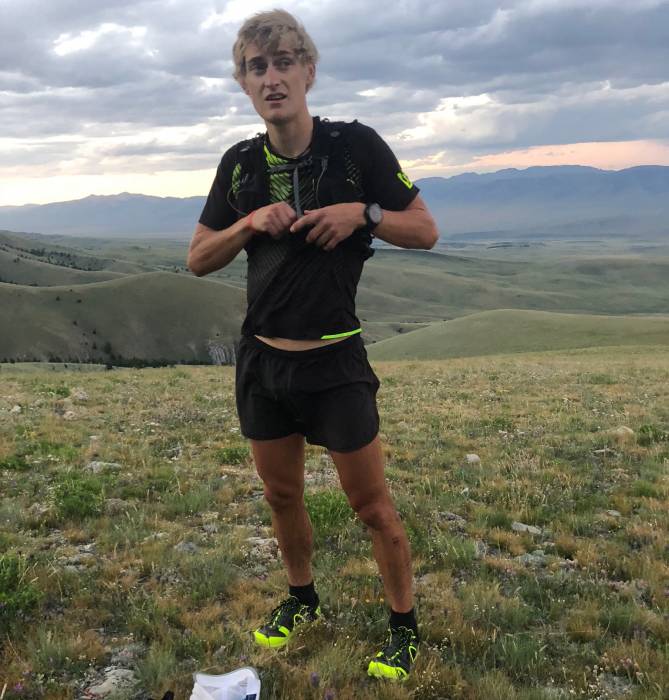 What do you appreciate most about Idaho’s mountains?

I truly love how they present themselves. I was fortunate to grow up with the highest peaks in Idaho in my backyard and had the ability to explore constantly. Spending weekends climbing in the peaks, picking a certain rock feature, or just purely exploring is something that I have always loved to do.

It is very rare that I see many people on the peaks or the areas that I am in. The Idaho mountains are quiet, remote, big, jagged, sharp, and completely unique.

Up Next: Watch: Joe McConaughy Bushwhacks 70-Mile FKT on Wicklow Round