With S90V steel and a stripped-down design, the Benchmade Altitude packs a ton of cutting prowess into a superlight package.

Enter the Benchmade Altitude, a specialist knife made from S90V, one of the hardest steels you can buy. It holds an edge better than about anything else on the market — for a significant price of $235. Plus, it comes in under 2 ounces!

And because I spend my fall above treeline in the Rocky Mountains pursuing elk and deer, I jumped at the opportunity to try out this slick knife.

In short: The Benchmade Altitude is a barebones tool stripped to its essentials. Using the finest, lightest materials, it does a superb job of cleaning game in the field.

And because of its S90V steel, it will keep working through multiple big-game animals like deer and elk. Its main con is that it’s very expensive and not easy to resharpen (although Benchmade will sharpen it for you for free if you send it back in).

There are two big reasons for a hunter to shell out big bucks for the Altitude. First, it weighs next to nothing at a scant 1.67 ounces. Second, it holds an edge longer than any knife I’ve ever used. 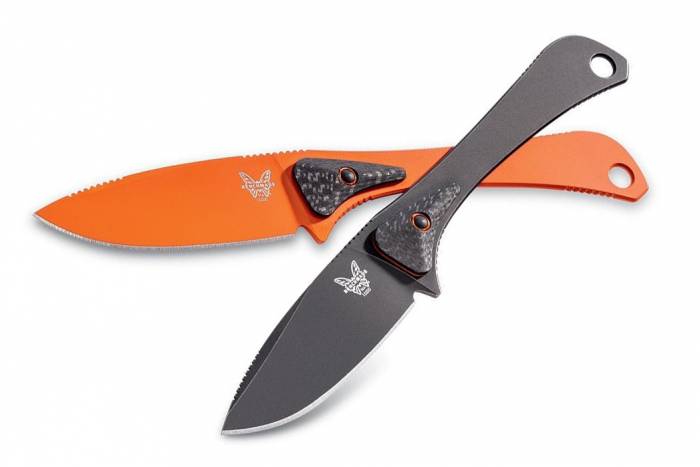 Beyond that, it is a very tried-and-true blade shape. The 3.08-inch blade caps a 7.38-inch overall tool to create a perfect cutting implement.

I personally like small knives like this for processing game in the field. Not only are they easier to control, but they also are less likely to cut a buddy who gets their hands in the wrong places while you’re working.

I cleaned or helped clean two mule deer so far this season. And I used this knife to do just about all the work on both deer. It’s the sharpest, most precise cutting tool I’ve used in the field so far.

Here are the details.

Over the archery season, I took part in two mule deer kills. First, a friend took a medium-size doe. Next, I took a good-size eight-point buck.

We used the Altitude to gut both deer in the field. We marveled at its sharpness when he sliced into the first deer. It parted skin and meat — even fur — like a laser. He processed that deer at home with his own knife, but I did help a fair amount and did some cutting with the Altitude during processing. 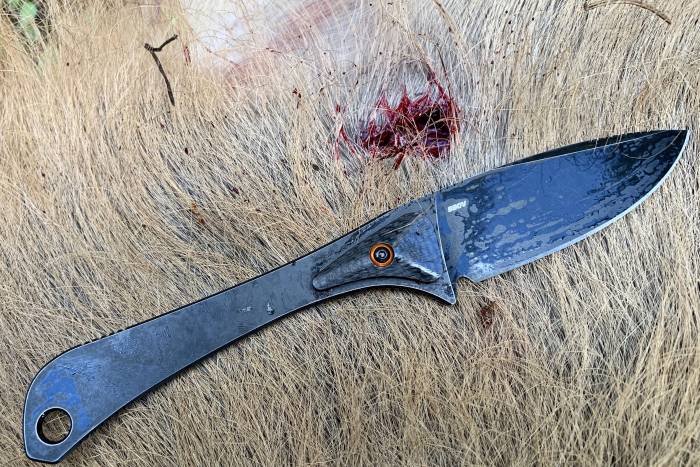 I then gutted my own deer in the field. The knife was still scalpel-sharp, having done enough cutting through fur to dull many other blades. I was already impressed at this point, but things got even better.

I returned to the house and started skinning, cutting up, and packaging meat. Through a few hours of hard cutting, the knife stayed razor sharp.

It wasn’t until we nearly completed about 5 hours of hard cutting work that the knife started to dull slightly. And even so, it was still very serviceably sharp. This thing really holds an edge!

To me, it’s also a great shape and size for meat processing work. With a couple of carbon fiber micro-scales on each side, your fingers have a good grip. The jimping on the front and back works well for thumb leverage. And while the handle is thin, it’s easy enough to grasp and leverage because the razor edge requires very little pressure for cutting.

The Altitude‘s sheath is very basic, just a small Kydex pocket that holds the blade. It has a couple of attachment points for packs or vests, but I just drop the knife and sheath into my pack. It would be nice if the sheath fit on a belt or had some other options, but it’s functional and protects the blade just fine.

Overall, I loved this knife. But it is expensive. And once dull, it’s not easy to resharpen on your own. However, Benchmade will resharpen it for free, for the life of the blade.

But for those looking for a tough fixed blade that weighs scant ounces for hunting, this one should be high on the list.

Up Next: Farming, Ranching, Hunting: ‘Not Just a Man’s World’

Saving…
Farming, Ranching, Hunting: ‘Not Just a Man’s World’
How to Dress a Duck — and Most Game Birds
×