Recently funded on Kickstarter, the Mako Rex 121 uses steel that approaches the limits of the Rockwell hardness scale. 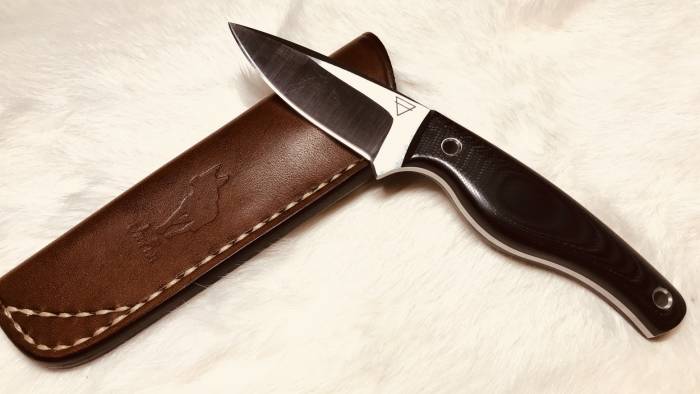 But it caught our eye because he used one of the most exotic steels on the market: CPM REX 121.

The Mako EDC is a 6.9-inch fixed-blade knife. It has a fairly large, nontraditional handle made with black G-10 scales. But enthusiasts will drool for its blade.

There, you find wildly hard Crucible CPM REX 121, a steel that Creely claims to harden to 68 on the HRc scale. For reference, the scale tops out at 70.

What does that mean for knife users? Basically, this knife will hold an edge longer than almost every other knife on the market – other than maybe a handful of blades made with Maximet and a few other super steels.

But it does come with drawbacks.

Creely designed this knife for Micheal Christy, a serious knife junkie with a substantial YouTube following. He wanted an everyday carry fixed-blade “from the latest high-performance steels.”

Thus, the Mako EDC was born from a metal not yet explored by most production companies. Users can expect it to hold a razor sharp edge for a long time.

But – and this is a pretty big but – it will likely chip easily if abused.

“CPM Rex 121 is likely the highest edge retention steel available on the market today, eclipsing even Maxamet in that regard,” Creely told us. “The reason you don’t see more makers using this steel is that the extreme edge retention comes at the cost of toughness.”

This is because hardness and toughness typically lie on opposite ends of the knife-making spectrum. You can have some of both, but increasing one usually decreases the other. Thus, this thing should slice like a champ, but if used to baton or pry, it could easily chip or even break.

So, REX 121 is a very hard steel, but it’s not so tough. I learned quite a bit from a quick interview with Creely and will let his explanation speak for itself:

“A very pedestrian definition of toughness would be a steel’s ability to bend without breaking, or chipping as the case may be in knives. Typically, big choppers are made out of steels that have great toughness, a modern steel that exemplifies this would be CPM 3V. On the toughness chart, REX 121 would be at the bottom. This steel is also not a stainless steel, so if not cared for properly it will rust. REX 121 is a great chance to see how far steel technology has come in the specific area of edge retention.”

And that, in part, is why Creely designed it as a small fixed-blade. It’s meant to cut, over and over, and stay sharp. Just don’t abuse it.

The combination of thinner stock, superior steel, and amazing grind make the Bravo 1 LT in 3V my favorite fixed blade on the market. Read more…

And once you do dull the blade, resharpening will also be difficult due to the super hardness of the steel. But Creely said it can be resharpened as long as proper diamond-surfaced materials are used.

Of course, all this sharpness comes at a cost. You can order a Mako EDC online now for delivery in July. But at a high price of $379. 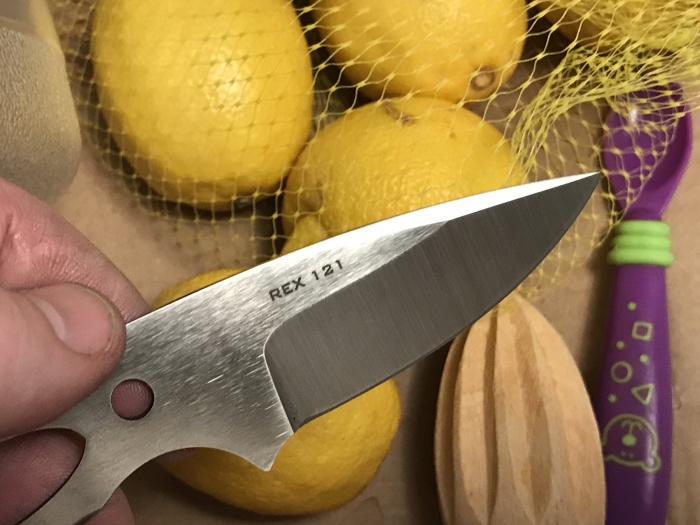 For those interested in other models in REX 121, keep an eye on Creely’s Kickstarter. I wouldn’t be surprised to see other knives there soon.

“I am currently in the process of testing a small run of Makos in LC200N,” he said. “This is a totally different mindset of steel which is dramatically more balanced than REX 121, and it has very good edge retention, yet it approaches H1 (used in Spyderco’s salt series) in corrosion resistance, as well as having very good toughness. I also did a short run of Makos in Bohler M390. I anticipate in the next few years to have over a dozen different steel types represented in this model.”

And if his previous fundraiser is any clue, he’ll offer the blades there at a significant discount.

Up Next: Top Knives and Tools From SHOT Show 2018