Knives with replaceable razor blades give users an easy-to-maintain tool that weighs almost nothing. The Resolute X-1 pushes this form’s envelope.

Could a space-age box cutter be the ultimate hiker’s knife? At just 0.445 ounces, the Resolute X-1 makes a strong argument.

Hikers and backpackers often don’t need much of a knife. Especially for well-prepared hikers who carry their own food and shelter, a knife rarely comes into play.

But, at least in my opinion, it’s a mandatory piece of safety equipment. You just never know when you’ll need to cut something, be it fabric or rope or who knows what else.

So this little re-engineered box cutter-style knife is intriguing. Designed by “a group of aerospace engineers who design prototype-aircraft for a living,” the X-1 houses a replaceable razor blade in a titanium housing.

It has locking detents to provide a secure blade extension. It also has a pocket clip so you can easily carry and deploy the knife.

Our team hasn’t seen the X-1 yet, but it seems like a clever design that would likely work well. For those who don’t mind a light blade for EDC, it could easily open boxes or letters around the office too. And given the disposable blades, it requires no more maintenance than slipping in a new razor, no other tools required. 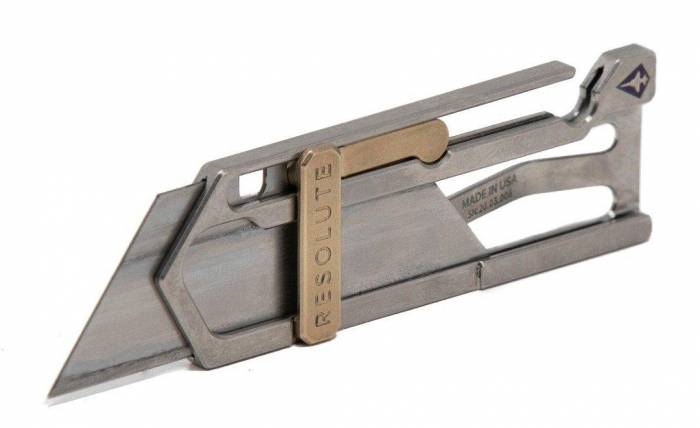 The X-1 is now raising funds on Kickstarter. And it’s doing well, with more than $25,000 in support already.

If it has downsides, it’s the price and small size. The X-1 will cost you $98 on Kickstarter — a hefty fee for a teched-out box cutter. It’s also very small, which could make it hard to use on any tougher jobs. We haven’t seen one in person yet, but we guess it doesn’t offer much of a grip given the minimal handle.

But for those looking for a superlight knife of this style, it’s a very clean, intriguing design. For those willing to take a chance on a superlight design, this knife looks promising.

Up Next: Leatherman’s Best Tools on Sale: Save on Iconic Multitools