With ample seating and cargo space, Volkswagen launches the Atlas to compete with Subaru’s Outback. We test drove it on one of the most breathtaking, winding roads in the country. 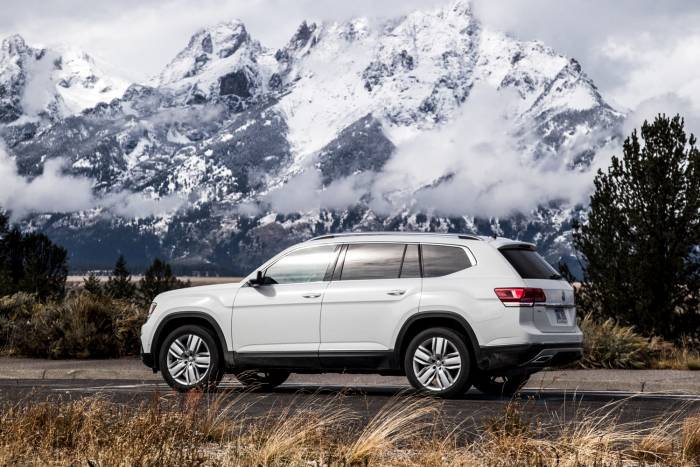 Of all the classic roadways in California, Lake Tahoe is the one for pure driving fun. BMW motorcycle clubs, Corvette collectors, daily drivers: The road circling the largest alpine lake in North America is something everyone should experience.

That’s where my ride in the new Volkswagen Atlas SEL Premium V6 4Motion began. The folks at VW couldn’t exactly toss me the key (it’s push-to-start), but 20 minutes after touching down at the Reno Airport, I was taking off.

For the next few days, I test drove the new Atlas at the base of sunny and snow-covered Diamond Peaks Resort. VW hopes the Atlas (alongside the Tiguan and Golf) will challenge Subaru’s dominance among ski bums. It offers a similarly priced, family-friendly adventure vehicle aimed at mountaintop getaways.

In short: Built in Chattanooga, Tenn., the seven-passenger Atlas offers competitive technology and spaciousness combined with hallmark VW driving dynamics and attention to design. With the ample seating and $30,000+ price tag, the Atlas targets families with a sizable budget (the model I tested costs about $50,000). But it marks a surprisingly luxurious driving experience in a package sure to get the attention of Outback fans.

From the airport, my drive to Lake Tahoe took me up and over the Mt. Rose ski area. With an elevation of 8,260 feet, Mt. Rose provides some of the most challenging cliff skiing in the Tahoe area, where 14 of the world’s top resorts all lie within an hour’s drive. 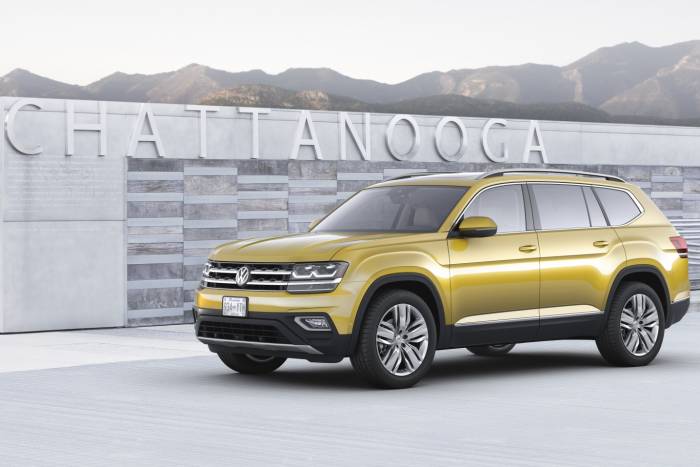 This point is important, as VW also showcased its partnership with the Professional Ski Instructors of America. It seems VW aims to embed itself into the mountain town and resort culture that Subaru has closely guarded for two decades.

Diamond Peak Ski Resort is located in Incline Village, Nev., part of the famed North Lake region. Situated on the Nevada-California border, this place is a summer camp meets extreme skiing paradise. And that’s where the Atlas and I connected with the VW crew and the other two 4Motion vehicles: the new Golf Alltrack and Tiguan.

The Atlas is comparable in size and specs to the Honda Pilot, Ford Explorer, and Toyota Highlander. According to Hinrich J. Woebcken, CEO of VW North America, it marks “a brand new journey for VW to enter into the heart of the American market.”

When I first found my way to Incline Village, I pushed through every gear in the eight-speed automatic transmission. And the onboard navigation system and digital dashboard were so intuitive and user friendly, I practically followed them with my eyes closed. 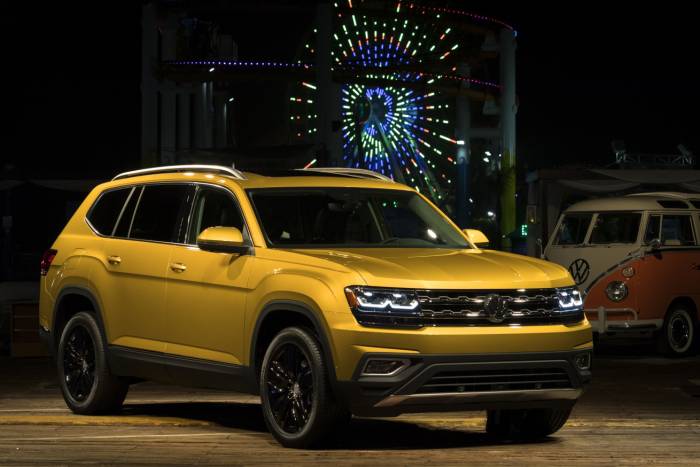 Make no mistake, this car has no self-driving capabilities. But it does have a full suite of advanced safety features (more on that to come).

Available in five trim levels, the Atlas presents an evolution of the VW “CrossBlue” concept vehicle first seen in 2013. It builds on the brand’s latest design concepts to create a somewhat new look in the SUV segment. The Atlas is modern and muscular, with classic proportions and clean lines, while still offering a low drag coefficient of 0.34.

Tech talk aside, the Atlas is just a blast to drive.

Nestled into the heated leather pilot’s seat, seatbelt on, I blasted the mountain passes in snow and ice that would have kept most drivers home drinking hot cocoa. You get the four-wheel traction that feels like a small 4Runner, but with comfort and road-hugging power more akin to an Audi. That said, compared to the smaller two VWs with Alltrack I drove, the Atlas definitely handles more like an SUV than a sports car when making quick movements on the highway.

I didn’t drive the four-cylinder version of the Atlas, only the V6, which powers up hills and around corners like a truly modern machine. Switch into manual shift mode and burn through gears like you’re driving a stick shift. This is very handy for quick acceleration and for slowing down on descents without using the brakes.

When it does come time to brake, the performance doesn’t stop – you do. Much like you’d expect from a brand-new $50,000 car, the stopping power is on point and simple to ease into no matter if you’re winding down a slick mountain pass or grooving through traffic, both of which I handled without giving the brakes a second thought. There was no grabbing or jerkiness like some less expensive new cars you might have experienced.

Regarding visibility, the front captain chairs might be best suited for someone tall like myself (I’m 6’2″). I definitely felt enveloped in the cockpit, which gave me no problems. But a smaller person could feel a bit granma-ish trying to see out over the steering wheel.

Again, a big seven-passenger wagon like the Atlas may not be for everyone. But if you like a little room to stretch out and, like me, just feel safer and more comfortable in a larger vehicle, it’s on point.

Road noise is a non-issue. Unless you’ve got the sunroof open and the sound system off, you might hear the tires roll on a beautiful sunny day. But I had the thing closed up like a rocket ship, XM radio blasting and snow falling around me. So I could only hear my thoughts as I reminisced about the turns I had made just hours before.

It’s when you get the Atlas on variable conditions that it excels.

Over three days of driving, I managed to get the Atlas, Golf, and Tiguan off road several times. Shifting into Offroad mode (with the simple push of a button below the shifter), you really get what you pay for here.

I powered up Forest Service roads, ski area access roads, and even busted out some off-road parking lot shenanigans just to make sure I knew what it could handle in an emergency. I was not disappointed. Honestly, I felt so secure in full-time four-wheel-drive Offroad and Snow mode that I might as well have been driving a Jeep.

The SEL Premium I drove had 20-inch aluminum-alloy wheels and 255/50 all-season tires. And all Atlas models has 8 inches of ground clearance and departure angles of 20.4 and 22.2 degrees (front/rear).

That’s a little short of the Subaru Outback, which rolls off the line with 8.7 inches of ground clearance. But with departure and approach angles of 18.4 and 22.7 degrees, the Outback falls a little shorter in that category.

Engineered from VW’s modular transverse matrix (MQB) architecture, the Atlas is larger than any other VW model in the U.S. at 198.3 inches long, 78.3 inches wide, and 70 inches high.

Let’s call it a wash on this front, with a little clearance advantage for the Subaru. Most drivers won’t note the difference. And if you do regularly, maybe it’s time for something more burly. 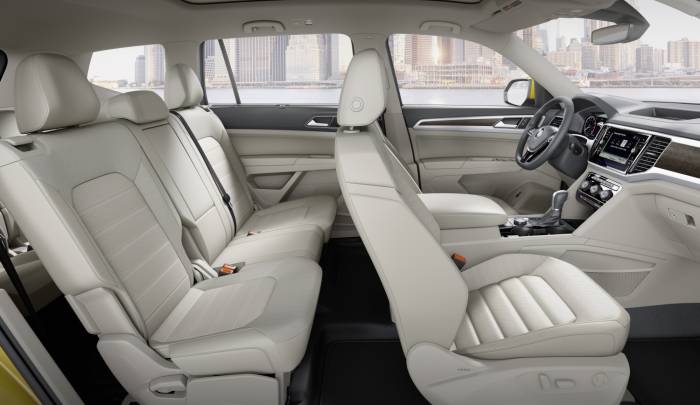 The Atlas’s interior design is classic VW – clean and functional, with a premium feel. Driver controls are positioned for optimal ergonomics and usability. And simple, driver-centric displays enhance involvement behind the wheel rather than distracting from it. The seat position, shifter height, and spacing between pedals are also fine-tuned for driver comfort.

Inside, the Atlas maximizes the potential of its three-row seating layout. It accommodates up to seven adults, boasting a cavernous 153.7 cubic feet of passenger volume. And it has a maximum cargo volume of 96.8 cubic feet behind the front-row seats. With just the third row folded, cargo capacity measures 55.5 cubic feet. When all seats are up, cargo capacity is 20.6 cubic feet. 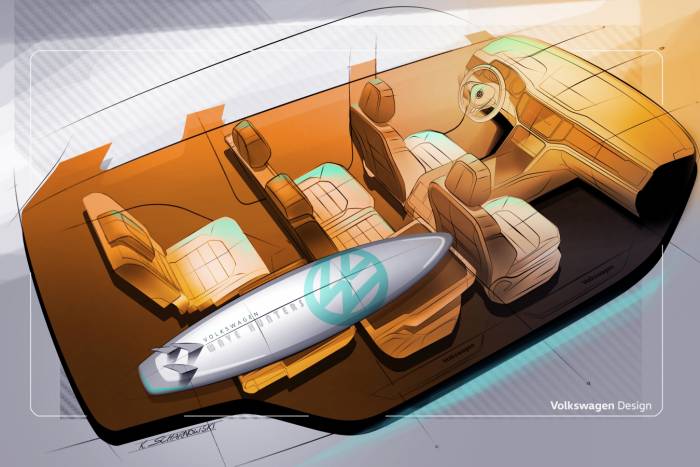 An innovative folding mechanism on the second-row bench seat eases entry and exit on both sides. The seat can tilt and slide forward, even with child seats in place. On SE models and above, captain’s chairs replace three-passenger bench seats. Both second- and third-row seats fold flat.

The panoramic sunroof especially impressed me. It measures 4.46 feet by 2.85 feet, with a two-part glass opening system and powered sunshade (offered on SEL and SEL Premium models).

Each of the three rows is equipped with an array of inputs (12V, USB, auxiliary), cupholders, bottle holders, storage nets, and cargo containers. 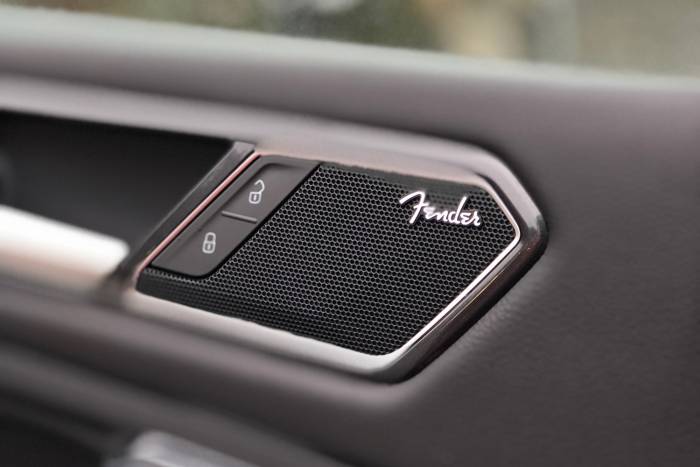 Dependent on trim level, the Atlas offers six- to 12-speaker audio. And the SEL boasts the Fender Premium Audio System, the most advanced of its kind. Trust me, get this one if you can. With a 480-watt, 12-channel amp, it delivers arena-sized sound and recreates the emotion of a live performance for all three rows of passengers. 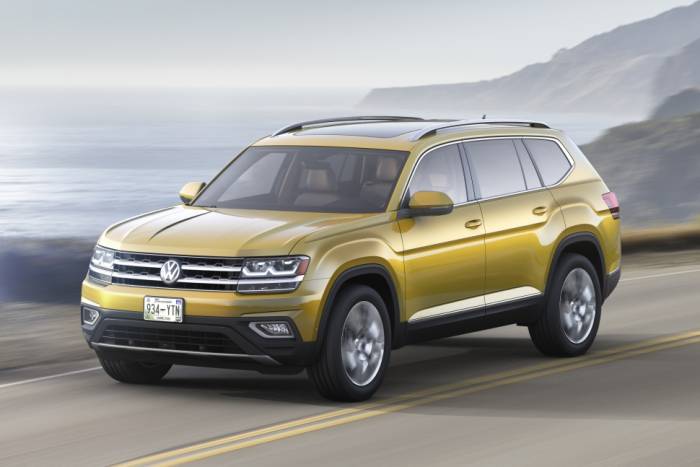 VW offers two engine options on the Atlas, both with eight-speed automatic transmission: a four-cylinder TSI turbo and the more powerful VR6. However, the 4Motion with Active Control all-wheel-drive is only available on V6 models. The V6 is a direct-injection engine that delivers 276 horsepower at 6,200 rpm and 266 pound-feet of torque at 2,750 rpm.

The 4Motion Active Control is always engaged, and it runs in FWD in normal situations to save fuel. At the first detection of slippage, clutches engage to drive rear axles. Increasing speed will transfer additional power to the rear control unit constantly as the system calculates ideal torque. And up to 100 percent of available torque (50/50 split) can be applied to the rear wheels.

4Motion lets you switch the assistance systems instantly with the push of a button. It offers four preset modes for varying driving conditions: Onroad, Snow, Offroad, and Custom Offroad.

I tested the Snow mode extensively on muddy, wet, snowy roads and parking lots. In Snow mode, if slippage is detected at one of the four wheels, the system reduces engine output. It has a flatter acceleration curve with early upshift points. And the characteristic curve changes raise for straight-ahead travel, increasing traction, and lower for cornering, improving tracking.

According to the brand, it’s also the only vehicle in its class to offer an Automatic Post-Collision Braking System.

Advanced safety technology, integrated navigation and entertainment, and heated leather seats are all packed into the Atlas. But the icing on the cake is it drives more like an Audi Allroad than any VW I’ve ever piloted. And it sports high-end finishes.

It’s not like the Volkswagens of old. Don’t worry about plastic parts breaking off in your hand after 100,000 miles. And that’s where the comparison to Subaru comes in. Subarus have become the mountain town standard without any luxurious finishings. Its all-wheel-drive chassis and engines are renowned for running easily into the 300,000-mile range.

Will this new class of VW hold up to that standard? Only time will tell. But for those looking for a new weekend warrior whip that can carry the whole family in a confidence-inspiring and comfortable way – for the foreseeable future – there’s a new all-wheel-drive sheriff in (mountain) town.

Up Next: REI and Lyft to Offer Discount Rides, Concert, Prizes