The crossover SUV market is super hot right now, and Honda is taking full advantage. It will resurrect the adventurous Honda Passport for 2019, a vehicle we haven’t seen since 2002.

In its first life, the Honda Passport launched in 1993 as a rebadged Isuzu Rodeo. Though it died off in 2002, the Passport will reincarnate in its third generation as an adventurous five-passenger midsize crossover SUV.

It will slot between the CR-V and Pilot in Honda’s lineup. And this time it will be based on the same global light-truck platform that you’ll find under the Pilot and Ridgeline. 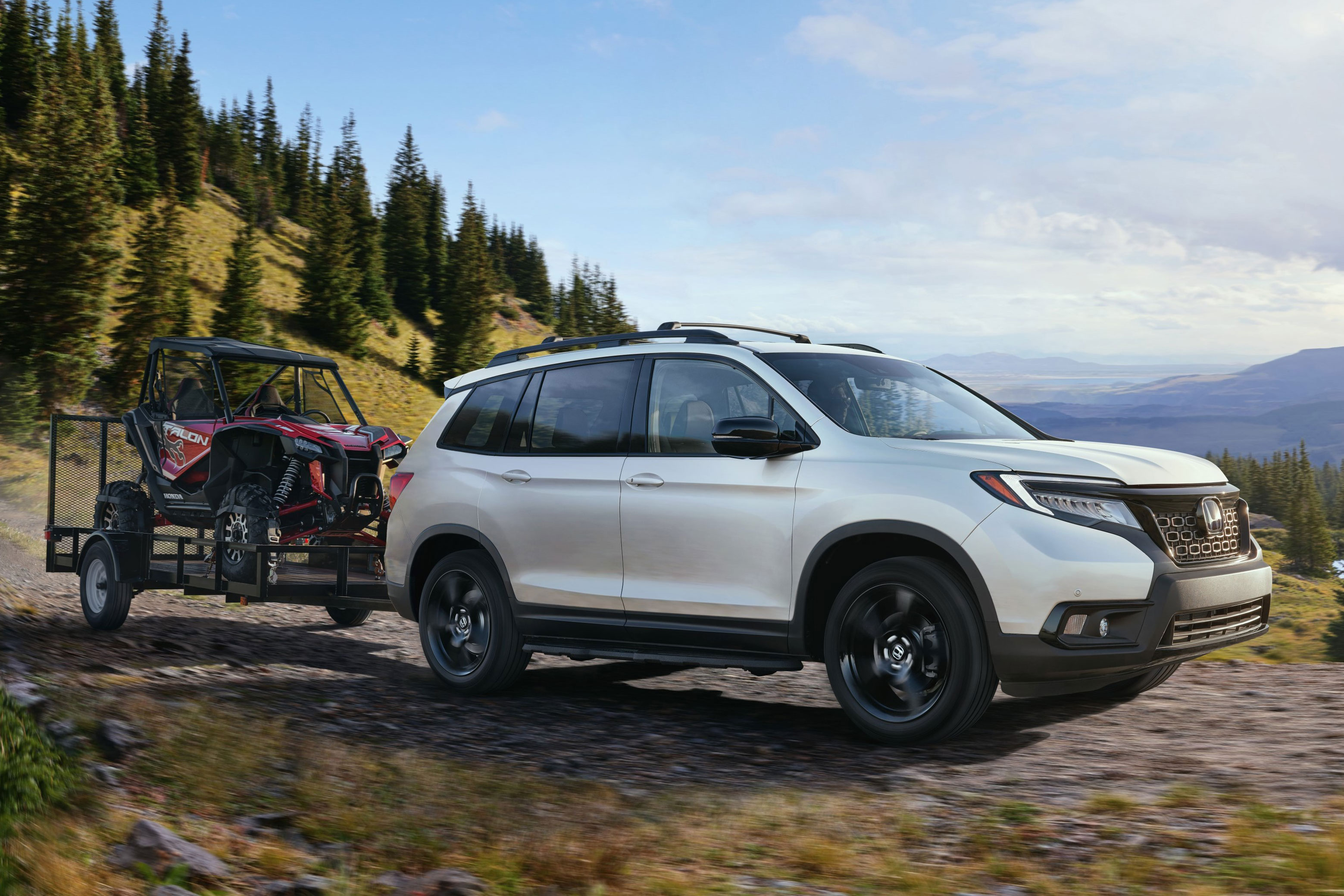 Expect to see the new Passport hit U.S. dealerships in early 2019. Until then, here’s a deep dive into what the new Crossover SUV will offer.

The 2019 Passport will come with an optional i-VTM4 AWD system, which will be standard on the top-trim Elite model. The system is able to send up to 70 percent of torque to the rear wheels and 100 percent of that torque to each individual wheel.

While not as good as a low-range transfer case and 50-50 power split four-wheel-drive system, this type of torque-vectoring AWD system is quite capable. The key is in the onboard computer systems, which have become quite smart. The Passport even offers a four-mode selectable “Intelligent Traction Management” system, for normal, snow, sand, and mud. 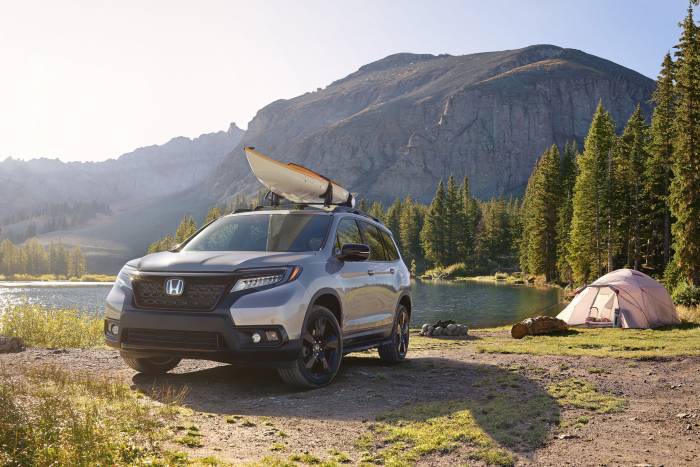 In addition, the 2019 Passport will undeniably be the most rugged SUV in Honda’s lineup. Black plastic lower-body cladding and rugged wheel arches make it look tough.

A tall stance and 8.4 inches of ground clearance suggest Honda intends for this SUV to stray from the pavement. The clearance is more than you get with the Pilot or CR-V but slightly less than the impressive 8.7 inches the Subaru Outback offers.

Still, the one thing that isn’t so rugged or off-road capable are the standard 20-inch wheels, which come on all trim levels. Sure, they look good on the street, but they are best suited for on-road duty. 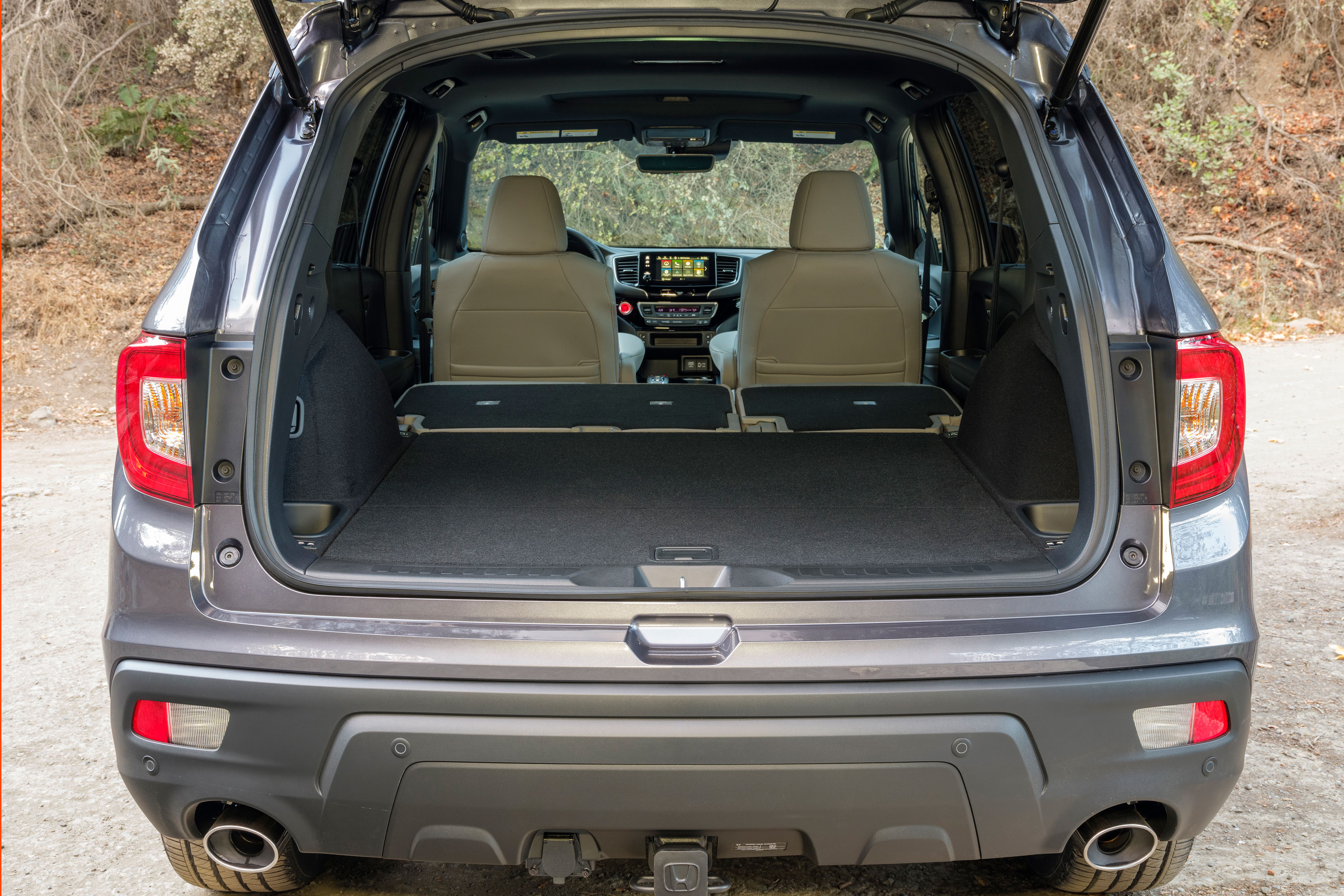 An adventure vehicle needs to be able to carry people and gear in comfort. The Passport offers impressive passenger space (115.9 cubic feet) and a lot of cargo space (41.2 cubic feet). And with the rear seats folded flat, it provides a massive 77.9 cubic feet of cargo room.

In back, the Passport hides another 2.5 cubic feet of under-floor storage. Honda markets this segmented cargo compartment — with removable, washable bins — as a place to carry “dirty gear or keep valuables out of sight.” 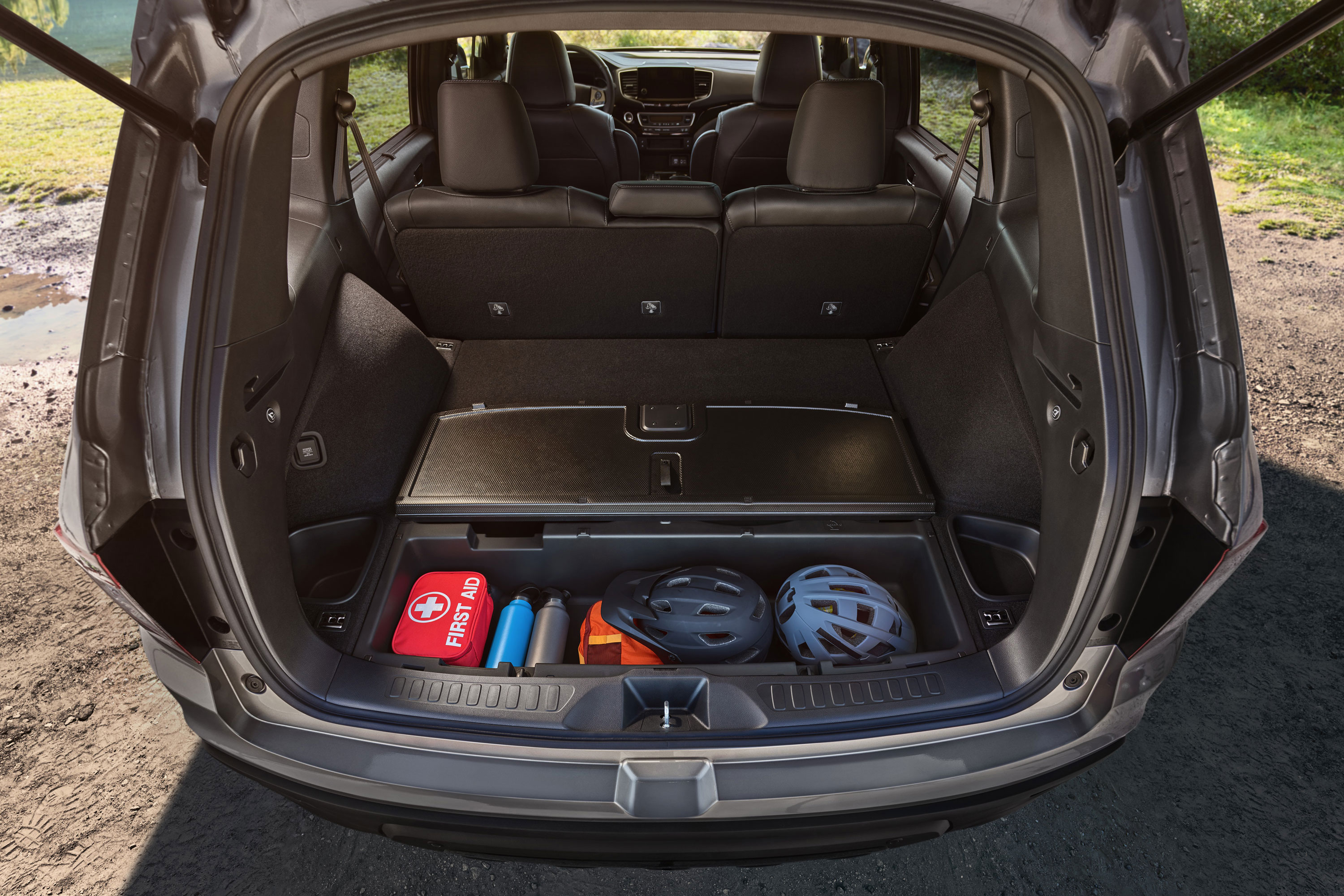 The Passport offers the same 3.5L V6 and nine-speed automatic transmission that you’ll find in the latest Honda Pilot. It offers up 280 horsepower and 262 pound-feet of torque.

That power can be put to good use with up to 5,000 pounds of towing capacity on the AWD models equipped with the towing package. While payload and performance numbers haven’t been released yet, I expect the Passport to be plenty capable of carrying the whole family and all their camping gear — at a spirited pace. 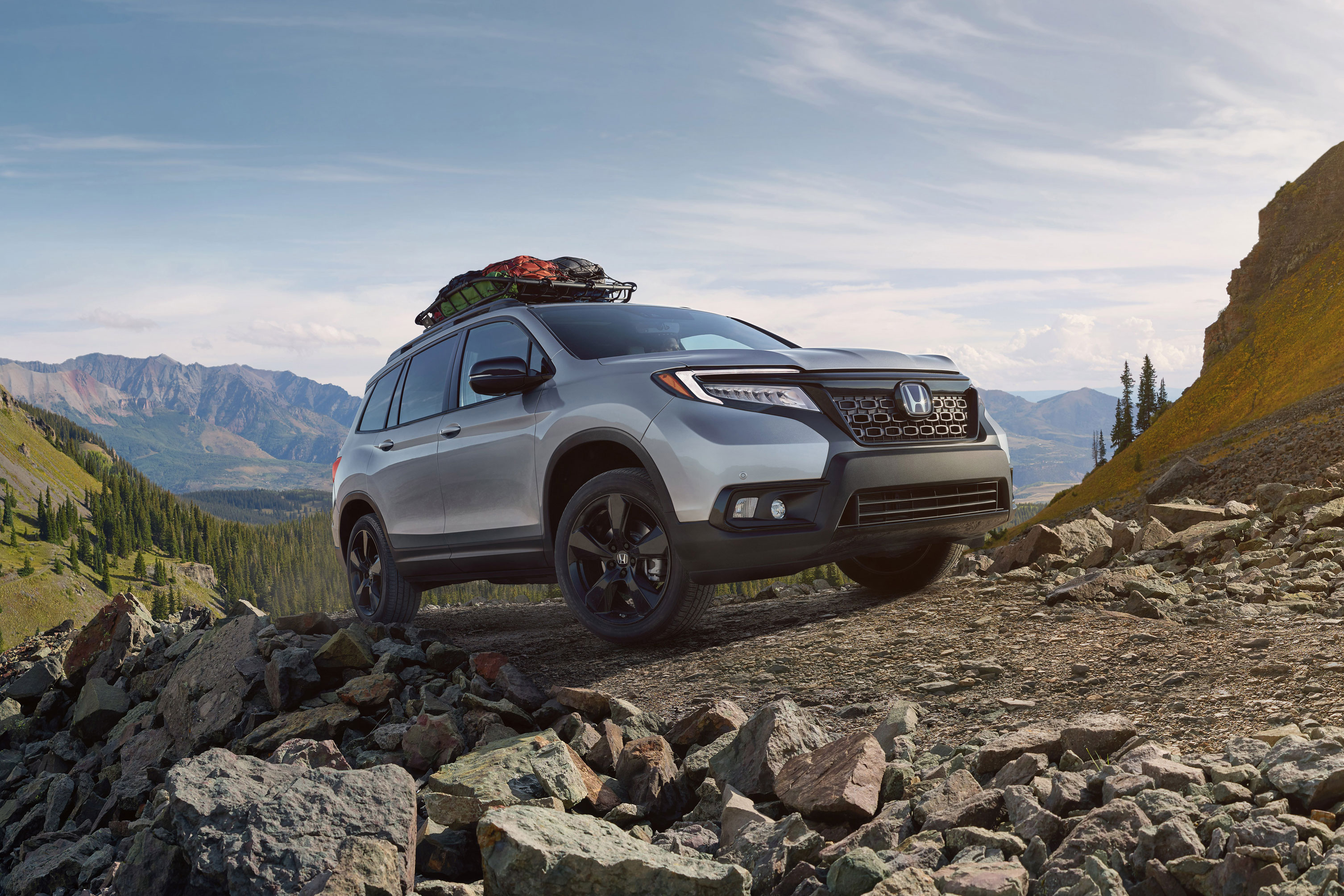 As you’d expect with a modern vehicle, the new Passport offers up a full suite of safety and comfort features. It comes standard with push-to-start and keyless entry as well as a three-zone climate control system.

Modern touches, like LED lighting, are found all around the Passport. It even offers six cupholders and plenty of USB ports. The second-row seating also slides forward and back, allowing for the perfect balance of cargo capacity and legroom. 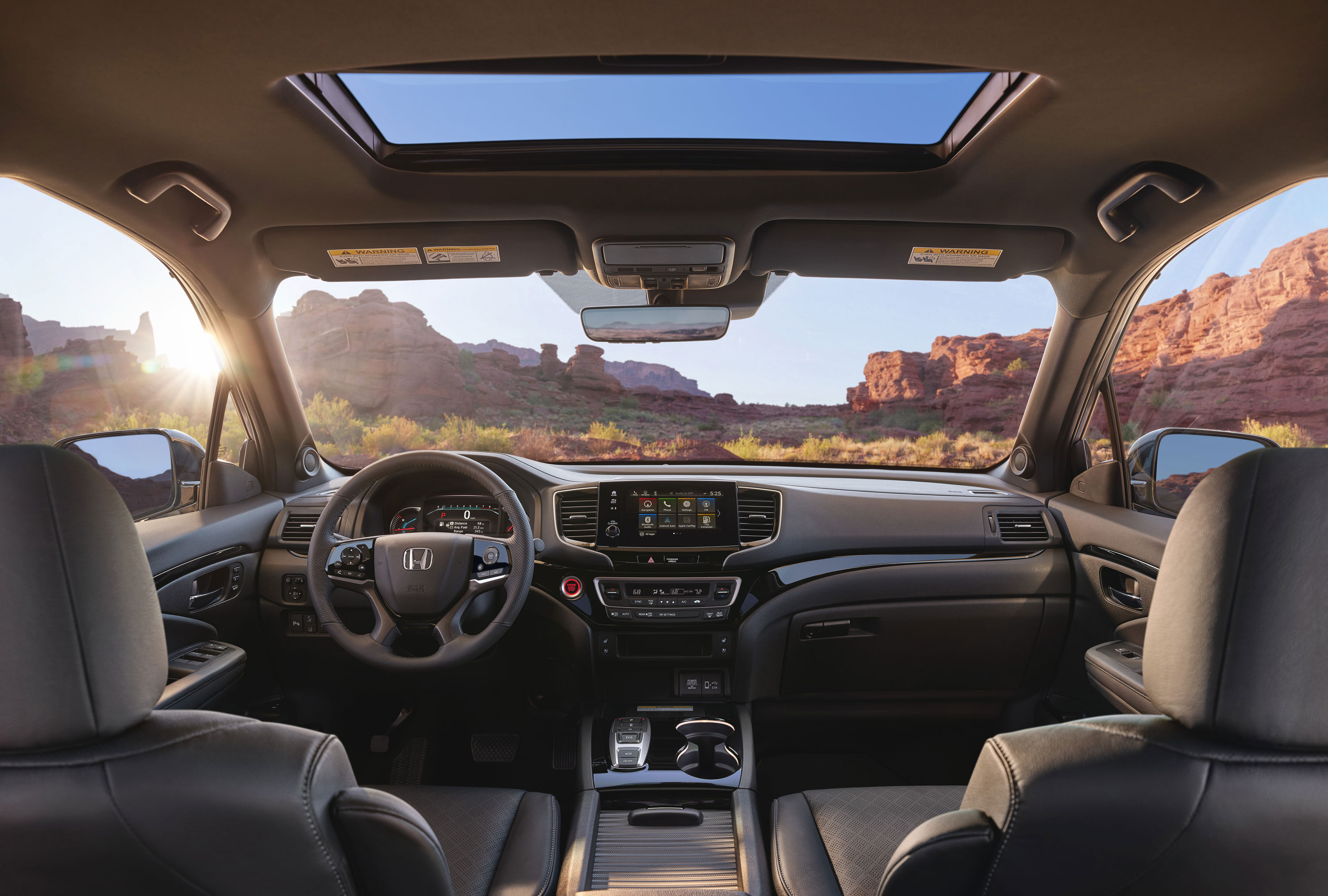 While I’m not a big fan of the front grille, the new Passport has overall clean, muscular lines. Sure, it looks similar to a ton of other crossover SUVs on the market, but it is a well-executed design that looks both sporty and higher-end than you might expect from Honda.

The Passport’s design isn’t very polarizing, making it hard to hate — or truly love, for that matter.

Pricing for the 2019 Honda Passport has yet to be announced. Expect numbers soon, however, as the Passport is only a few months away from hitting dealer lots.

Up Next: 2020 Jeep Gladiator: The Solid-Axle, Open-Air Truck of Your Dreams