No longer is there a need to sacrifice traction for fuel efficiency. Toyota finally brings all-wheel-drive functionality to its popular eco-friendly frontrunner. Meet the Prius AWD-e.

OK, so an AWD Prius isn’t unheard of. Versions of it have been available in Japan since 2016. But for its North American debut in 2019, Toyota has brought some new traction control technologies to the table and without too much of a hit on the hybrid’s incredible gas mileage. The AWD-e version hovers around the 50mpg (combined) fuel efficiency mark. It’s absolutely better on slick roads than the front-wheel-drive (FWD) versions, which get 52-56 mpg depending on trim. 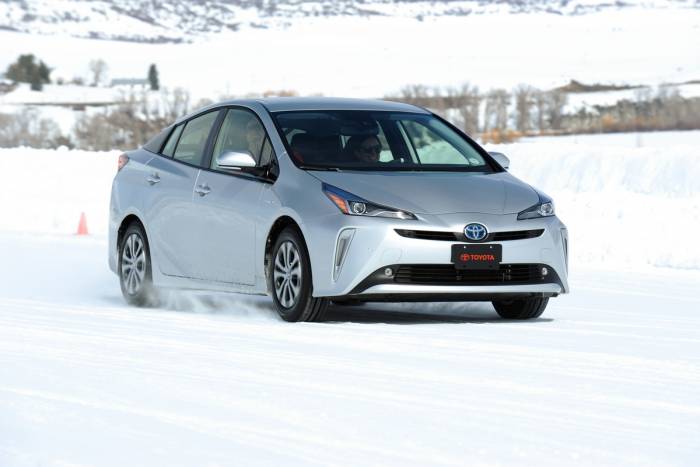 I had the chance to test drive the new AWD-e Prius on the snow track of the Bridgestone Winter Driving School in Steamboat Springs, Colo. The conditions were perfect for this kind of testing. Rolling hills, steep starts, and sharp corners provided ample and safe opportunities to push the limits of the AWD-e Prius in slippery conditions. 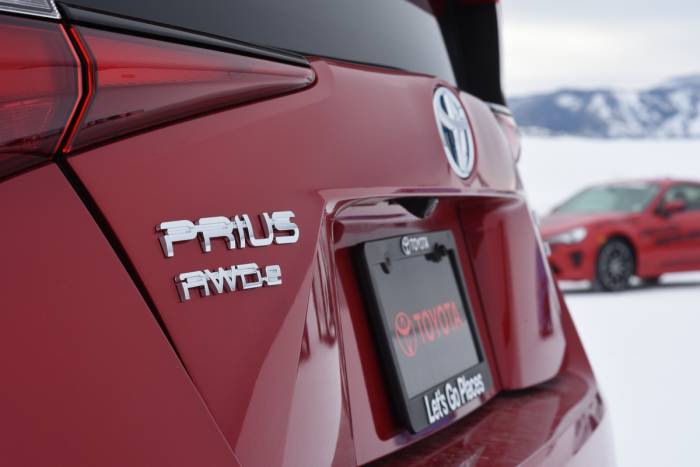 As expected, that little “e” at the end of AWD is for “electric.” Instead of running a mechanical driveshaft from the electric motor in the front to the rear, Toyota just put a separate electric motor in the rear. It’s an induction-style, magnetless electric motor that produces 7 hp and 40 pound-feet of torque. According to Toyota, this adds about 150 pounds to the AWD-e version bringing it to 3,300 pounds.

And the AWD-e versions use nickel–metal hydride batteries, which handle the cold better and tuck under the rear seats so they don’t compromise cargo space. The FWD versions use the usual lithium-ion batteries.

In reality, the Toyota Prius AWD-e is really AWD on demand. The rear motor always helps get the Prius going from a stop and assists up to 6 mph.

We tested starting uphill from a dead stop in a few different spots on the snow track. The Prius did great on inclines that were particularly icy, and there was very little side slip. But most importantly, it could get going from that position whereas the two-wheel-drive version may not have gotten away at all. 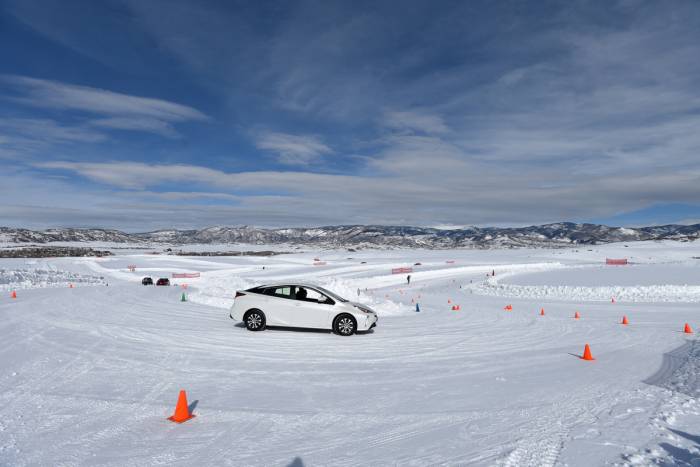 Once the Prius reaches 6 mph, the AWD system kicks power to the rear tires only as needed — when it feels the front tires slipping and needing some help. Naturally, this preserves battery power by only running the rear electric motor when it’s necessary.

Then, at 43 mph, a speed Toyota engineers determined to be the nexus of performance and efficiency, the AWD system no longer engages, even if the front tires slip. Granted, when traveling above that speed, odds are the driver is feeling confident about the road conditions and shouldn’t need power in the rear wheels.

This reinforces that the Prius AWD-e is not a rally car and is not meant to be pushed to those limits. It’s intended to help make getting around in normal and snowy road conditions safer and easier.

The AWD-e system does not help with braking or stopping power in slippery places. When applying the brakes, the AWD-e system disengages. And, like the FWD, it uses Toyota’s electronically controlled brake system to manage control between the regenerative braking and the hydraulic brakes.

Only the front wheels have the regenerative braking components, and both front and rear have disc brakes. All of the trims come with Toyota’s Star Safety System, which includes enhanced vehicle stability control, traction control, antilock brake system, electronic brake-force distribution, brake assist, and the brand’s Smart Stop technology.

All of these components helped keep the Prius in control on the snow-covered test track.

Where the AWD-e system does help is when steering by applying force to the rear wheels to provide the best rear torque for the situation. 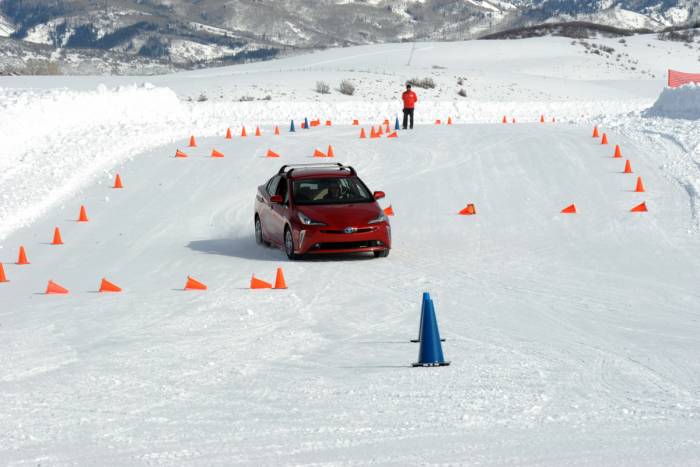 We spent a full day testing the 2019 Toyota Prius AWD-e models and the 2019 RAV4 on the Bridgestone Winter Driving School snow track. The 1-mile loop included hairpin turns, gentle arcs, and straight sections, all with rolling hills mixed in throughout.

With the freedom of risking knocking down only some cones, or, at the worst, plowing into a snowbank, we pushed the mostly reasonable limits. We didn’t crank the wheel all the way around while going 40-plus mph. 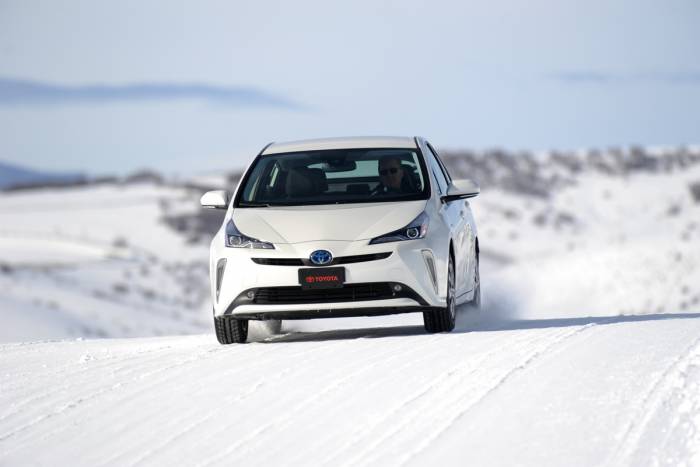 But we did get a little silly and did things beyond what would be done on snowy streets that would risk harm to body and property. We were amazed by how going just an extra 3-4 mph into a turn caused the tires to lose grip and slide over the lane cones. When simulating a sudden and abrupt lane change to avoid a road obstacle, we tried to get the Prius AWD-e to oversteer when slaloming through a series of cones. We never had a problem.

For 2019, Toyota is bringing the Prius trim designations in line with the rest of the fleet. Instead of the One, Two, Three, and Four versions, 2019 buyers will choose from the Prius L Eco, LE, XLE, and its premium Limited trim.

Only the LE and XLE are available in either the two-wheel-drive or the AWD-e version. The entire line received new styling, and the AWD-e versions get an extra 0.2″ of clearance, bringing them to 5.3″. This is still on the lower end, with the Ford Taurus at 5.1” and the Honda Accord at 5.9”. 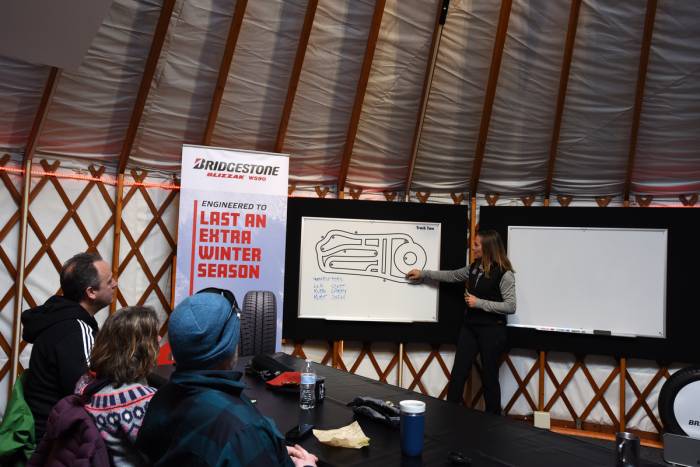 It should be noted that we not only used the course at the Bridgestone Winter Driving School in Steamboat Springs, Colo., we also received some pointers from the instructors at the school to help with how we managed the vehicles on the course.

These tips made a noticeable difference in keeping the tires from losing grip on turns. And when we chose to ignore those tips, cones often went flying. They also swapped the factory-provided P215/45R17 Dunlop Enasave 01 all-season tires with Bridgestone’s Blizzak snow tires. I considered this a little bit of a cheat because the Blizzak’s are amazing snow tires. I would have liked to have had one AWD-e Prius with standard all-season tires and one with the Blizzak’s to really feel the difference.

Up Next: VW ID Buggy Electric Concept: Who Doesn’t Want a Dune Buggy?!