Chevrolet just shot for the moon with its 2020 Corvette Stingray. This eighth rendition of the preeminent North American street rocket changes the sportscar landscape and significantly alters the DNA of an icon.

Chevrolet fully unveiled the 2020 Corvette Stingray last night to a huge crowd of media, dealers, and enthusiasts. It was a big show, in a massive blimp hangar, for a car that redefines a legendary nameplate.

The quick and dirty is that the new car will be a mid-engine V8-powered snarling beast with a double-clutch paddle-shift transmission. The interior is an extremely nice place to be, and the roof comes off and stows in the trunk. The new Corvette will start production in December. Base models will start at under $60,000, and it will be able to do 0-60 mph in under 3 seconds.

While I absolutely love driving the current C7 Corvette, it’s hard not to relate it to being an older, gold-chain-wearing, blue-collar American’s car.  This is because it’s a sharpened and refined version of a shape that we’ve seen for nearly 50 years. But the new 2020 C8 car is the first Corvette in decades that will turn heads of all ages and demographics. It’s the first Corvette that I would actually consider buying new!

The big reveal night started with two astronauts talking about technology and their long historical connection with the Corvette. You know an event is going to be a big deal when astronauts kick it off!

Corvette is the longest-running, continuously produced passenger car — 66 years — in the world. The first Corvette rolled off the assembly line on June 30, 1953. Since then, Chevy has produced more than 1.7 million.

While the new ‘vette breaks paradigms for the brand, Chevy has been working on a mid-engine design for decades. The Chevrolet Engineering Research Vehicle (CERV) I, II, and III concept vehicles show the long history Corvette engineers have had with mid-engine configurations. In particular, the CERV III concept car (pictured above) has many similarities, inside and out, to the new 2020 Stingray. 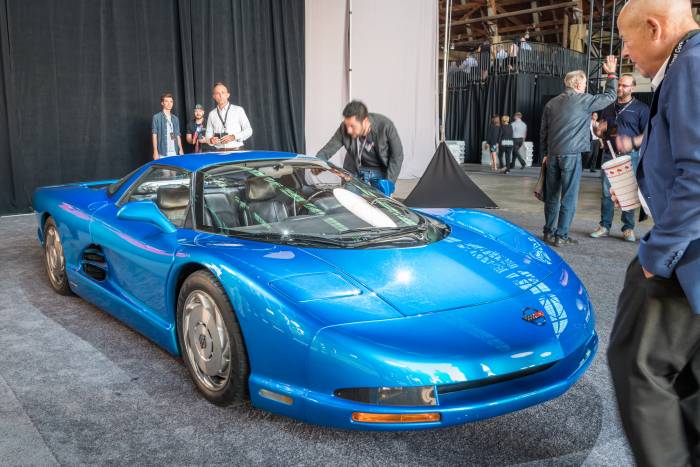 This is a true performance driver’s car that’s a track weapon, canyon carver, and great grand tourer at the same time. It will be able to hustle 0-60 mph in under 3 seconds, a feat currently reserved for supercars and all-electric vehicles. With the seating in the middle of the car, a 50-percent-stiffer chassis, and the mid-engine layout, the car should be extremely quick in the corners as well.

Chevy also packed this Corvette with the latest technologies, which will make the car both more fun and more usable as a daily driver. The driver mode selector gets a fourth mode, Z mode, in the new car. It’s a completely user-configurable mode that controls both the engine and transmission, so you can tune your car to your preferences or for a specific racetrack. The personal data recorder (PDR) system not only offers up high-definition-data-overlaid video, but the driver can also configure it into a dashcam for everyday driving. 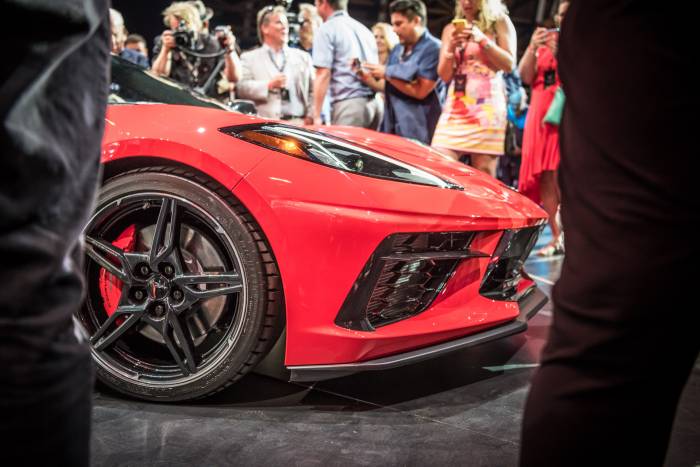 Probably the most usable feature on the car is the new 2-inch nose raise system. This prevents the car from scraping when going over bumps or entering/exiting steep driveways. The system is GPS-enabled and can memorize up to 1,000 places for automatic nose lifting.

Inside the car, you’ll find a ton of legroom but a snug, aeronautic-like cockpit. The seats are super comfortable and supportive but narrow — perfect for my skinny frame. The interior is a truly nice place to be with premium materials throughout. The squared-off, two-spoke, small-diameter steering wheel lets you know this car is ready for action. 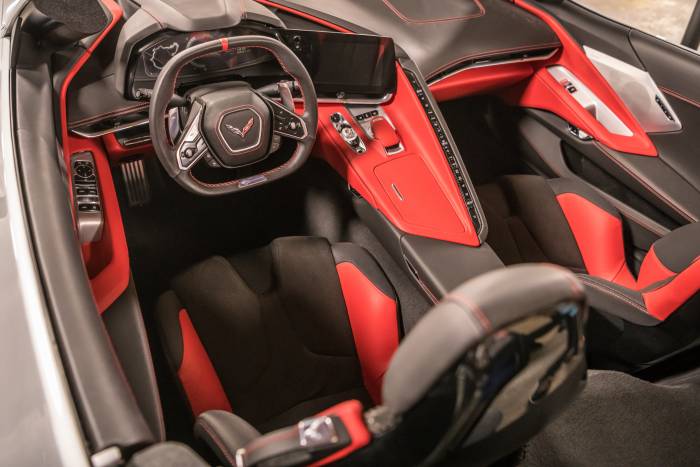 A mid-engine sportscar usually offers very little in the way of storage. The engine takes up the back of the car, and the front of the car is usually very small and full of front suspension components. The new Corvette offers front and rear storage compartments, with 12.6 cubic feet of storage. They are impressively large — large enough to hold two full sets of kiteboard gear in the trunk and overnight luggage for two in the frunk. The rear trunk is also designed to hold the removable roof panel.

The new Corvette is a car that can be configured to your specific tastes. There will be 12 exterior color options, six interior color configurations, three seat options, and even six seatbelt color options. There will also be a Z51 track package. This adds design elements like a carbon front splitter, rear wing, and side intake accents.

Oh yeah, did I mention the insanely attractive starting price? The base 2020 Corvette Stingray will start at less than $60,000. That’s a crazy low price for a mid-engine performance car, especially with this level of refinement and capability.

It’s hard to find the bad with this new design, but for sure there are a few things Chevrolet could’ve done better and a few things that might’ve elevated this car to truly new heights. Chevy engineers have left themselves room to build on this new chassis, however, which they are sure to do over its (no doubt) long lifespan.

The first obvious thing is that there’s not really anything new about the car’s propulsion. The engine is essentially the same small block 6.2L V8 LT2 found in the current Corvette. Sure, it’s the only naturally aspirated V8 in this segment left on the market, and it can put out an impressive 495 horsepower and 470 pound-feet of torque. It does sound good! It also allowed development money to go into the chassis and interior, and keep the retail price down. That said, it’s nothing new or interesting — like a fully electric or hybrid drivetrain would be.

The engine is the crown jewel under the rear glass of the new Corvette. Chevrolet touted how clean and purposeful the entire engine bay was, down to all the fasteners, to help showcase the engine. I have to say that they fell far short of the other mid-engine sportscar competitors in this area. While the engine bay doesn’t look bad, it just isn’t beautiful. An example is the two fasteners seen on top of the beautiful carbon fiber brace covers. They break up the clean, beautiful lines and detract from the overall high-quality look and feel of the car.

An all-new eight-speed double-clutch transmission (DCT) will make gear changes lightning quick. While there’s no doubt it will be fast and paddle shifters are fun, it won’t, however, be the same as rowing the gears through a stick shift manual gearbox. The 2020 Corvette is yet another sportscar to lose the manual shifter option.

A big issue with all Corvettes for me is that there really isn’t a good way to add a roof rack. I, for one, want a sportscar I can use to enjoy the drive to and from the mountain bike trailhead and kayak put-in. The removable roof is nice for open-air motoring but just doesn’t work for carrying gear. Something like the Seasucker suction cup bike mounts might work on the rear engine cover, though. It would have to be tested, as the cover is a crazy-thin 3.2mm-thick glass panel.

While Chevrolet worked hard to reduce weight through the creative use of a variety of high-tech materials, the overall car actually weighs in about 20 pounds heavier than the outgoing model. I believe the main cause of the 2020 Stingray’s 3,366-pound dry weight is a massive, mostly aluminum die-cast body structure for rigidity and safety.

I have a tall torso and have a really hard time fitting in many sportscars with a helmet on. The new Corvette looks to have very similar headroom as the current Corvette. That’s quite snug for me with a helmet. The seats are much more adjustable, however, so there might be a seating position that works.

Performance is what this car is all about. We all know Chevy will throw a supercharger on it sooner than later. The real question is if the brand will throw a hybrid system at it. Or, better yet, maybe it will incorporate a front electric motor to create an AWD Corvette. I, for one, believe Chevy has engineered the chassis for those types of major developments, but time will tell.

For the first time ever, the Corvette will also be available in a right-hand-drive configuration. U.K. and Australian Corvette fans’ prayers have been answered!

The convertible will add less than 80 pounds to the vehicle and should change the driving dynamics very little. Open-air motoring will take 16 seconds to achieve as the top folds into the rear of the vehicle but can be accomplished while traveling up to 30 mph.

That’s also true of putting the top back up. You can put the roof on when the rain starts without even coming to a stop and with only the push of a button.

Even with the roof retracted, Chevrolet says there is room for two golf bags in the trunk. That combined with the frunk storage space means this new Corvette, even with the top down, is ready for a road trip.

This is still a big-horsepower, rear-wheel-drive American sportscar that goes quick in a straight line and will undoubtedly be amazing at burnouts. The key refinement is that it will now be able to even better compete against the world’s best sportscars in the corners and appeal to a much wider customer base.

Quick acceleration and speed in the corners is a recipe for a good time behind the wheel. I’m truly excited to strap in and see what this all-new Corvette can do, especially on the track!

You can reserve your very own 2020 Corvette Stingray today online or through your local dealer. Expect deliveries to start in very early 2020.

Up Next: Lexus Flexes Off-Road Muscle With GXOR Concept Debut at FJ Summit