Our motors editor got behind the wheel of the 2020 RAM 1500 with new third-generation EcoDiesel during a press drive in Duluth, Minnesota. He came back impressed with the 2020 RAM diesel pickup but wanting a bit more out of the new diesel engine. 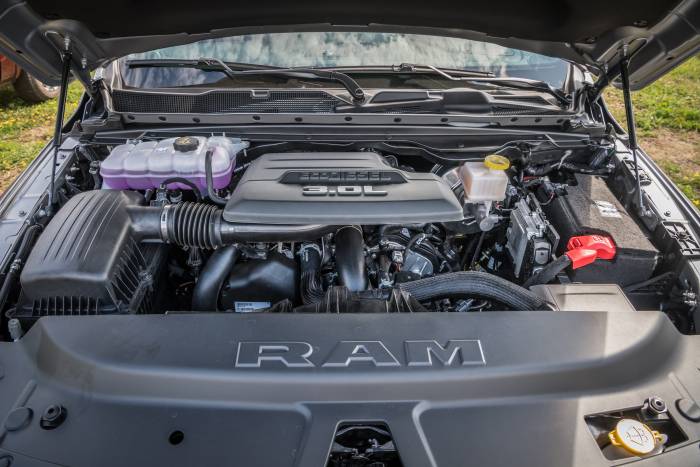 As for fuel economy, RAM promises “competitive” numbers but has released no official EPA-certified figures just yet. The 2020 Chevy Silverado 1500 4WD 3L I-6 offers current class-leading 25 mpg combined, and the 2019 Ford F150 4WD 3L V6 offers 22 mpg combined. I expect the EcoDiesel to be competitive, as I saw 22-26 mpg during mixed-use testing throughout a variety of 4WD RAM 1500 configurations. 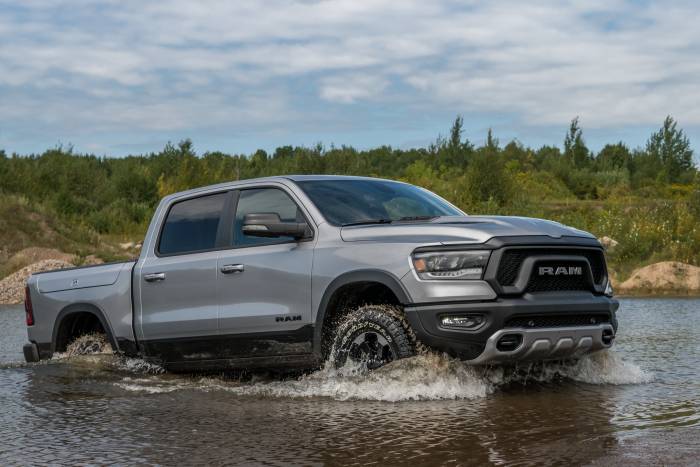 Those fuel economy numbers combined with the standard 26 or available 33-gallon fuel tanks should add up to a truck with a massive range. RAM executives told me the truck could go “up to a month without fueling up.” While that’s a fun statement that hints at impressive fuel economy and range, there are no numbers yet to back up such a vague claim.

Although the EcoDiesel’s class-leading torque is impressive, it falls a bit short on the horsepower front, at 260 horsepower. It does have 10 more than the Ford but 17 fewer than the Chevy. This is most noticeable when trying to make highway speed passing maneuvers.

My biggest gripe about the new EcoDiesel is power delivery. It’s not a turbo lag or really even a low power issue. It’s a computer calibration issue that creates a huge delay between your throttle input and engine response. This noticeable delay was frustrating to me when behind the wheel, as I like a vehicle to respond when I tell it to do something.

According to the RAM engineers I spoke with, the reason for this calibration and subsequent slow response to inputs has to do with keeping emissions low, maximizing fuel economy, and reducing engine noise and vibrations. 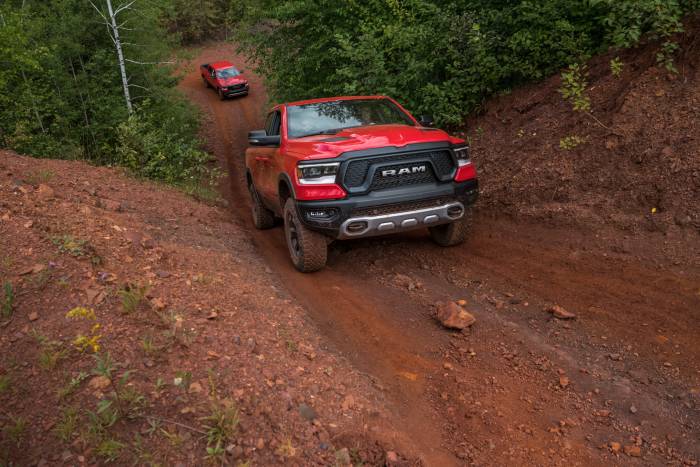 The only way I found to shorten the response time between throttle input and engine response was to drive in tow/haul mode all the time, something you’d have to reset each time you start the truck. By doing this, you will, of course, greatly reduce fuel economy.

The EcoDiesel tows like a dream! The best way to utilize the big torque from this engine is to put a big load behind it and head down the road. The 2020 RAM 1500 EcoDiesel offers best-in-class diesel towing at 12,560 pounds.

That number is also quite impressive because it’s a whopping 2,560 pounds more than the outgoing EcoDiesel. It’s also only 190 pounds less than a comparably equipped Hemi V8-powered RAM 1500, which is impressive when you consider the extra diesel equipment and engine weight of the EcoDiesel.

The really big news with the new EcoDiesel offering is the availability of the engine across the entire line of RAM 1500 trucks. The highlight for me is that, for the first time ever, the RAM Rebel off-road-focused truck will now be offered with the diesel. 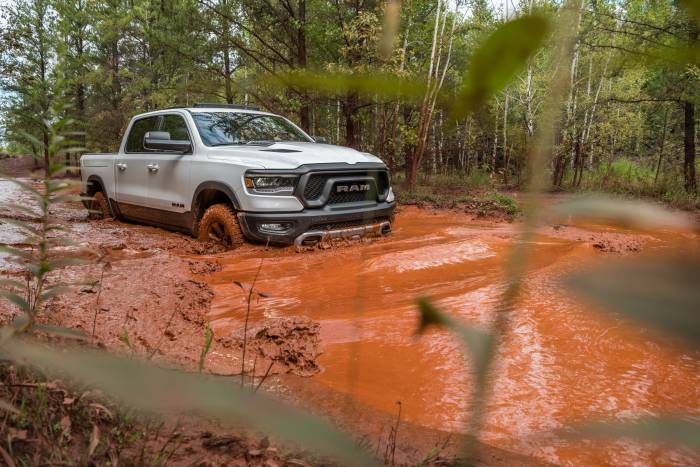 The EcoDiesel engine is a $4,995 option or $3,000-3,300 over the Hemi V8 eTorque depending on trim level. While not an inexpensive upgrade, the better fuel economy could make up for it if you put in enough miles behind the wheel. The starting price for an EcoDiesel-equipped 2020 RAM 1500 is about $39,000. That’s impressive when you consider the Chevy and Ford half-ton diesel truck options start around $45,000.

The new third-generation EcoDiesel will ship from its production facility in Ferrara, Italy, to Sterling Heights, Michigan, where the RAM 1500 is assembled. Expect to see 2020 RAM 1500 EcoDiesel trucks hit dealer lots late this year.

The first thing you’ll notice with the new EcoDiesel is that the truck is extremely quiet inside and out. There is little to denote that this truck is a diesel at all. The hood gets an EcoDiesel badge, and the gauge cluster gets a DEF gauge and the word “diesel” written on the fuel gauge. Besides these small accents, a small audible diesel tick, and lots of pulling power, you really can’t tell this truck is diesel-powered. 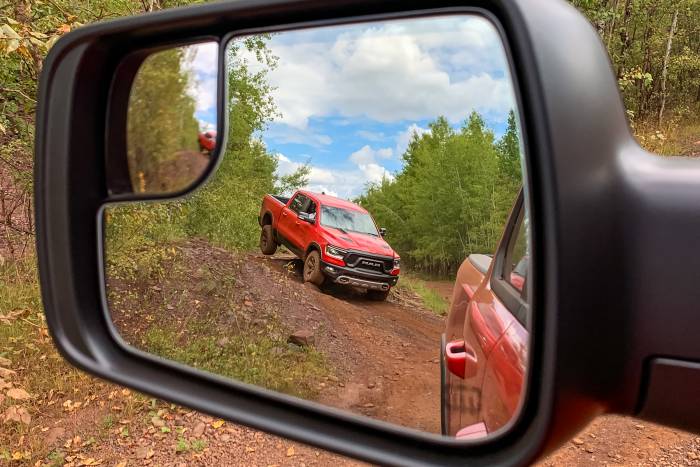 Of note is that the new EcoDiesel does not have start-stop technology. This will make many happy, as the feature turns the motor off and back on again at stoplights, many times in an abrupt and annoying manner. Many drivers turn this feature off on their gas-powered RAM 1500s, but must do so every time they start the truck.

The 2020 RAM 1500 is just a tiny bit refined over the all-new truck launched for 2019. It’s a really high-quality, comfortable, spacious truck packed with the latest technology.

It’s still the only half-ton truck with available air suspension — now faster and quieter for 2020 — or standard coil-sprung rear suspension. The optional RamBox bed storage bins are also super handy, and the new RAM Multifunction Tailgate is all kinds of cool. 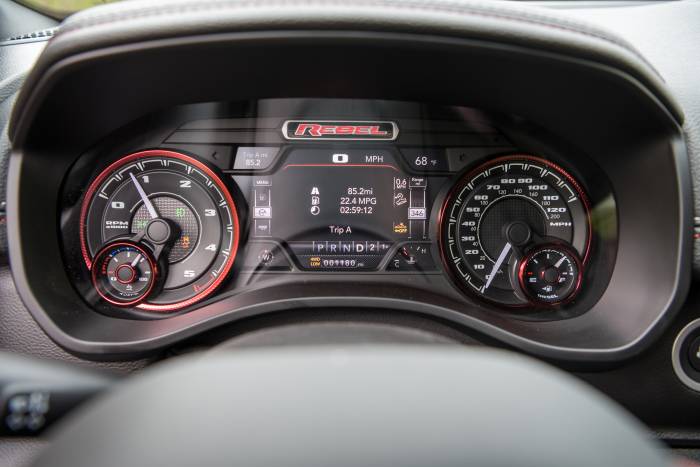 Inside the truck, the 12-inch Uconnect touchscreen is not only class-leading and super configurable but also now available on the Rebel model. Interior storage compartments and rear passenger legroom are cavernous in this truck. For 2020, the Rebel also gets an optional adaptive cruise.

The downsides to this truck are few and far between — but there are a few. Inside, you don’t get a dead pedal for the driver’s left foot to rest on, and front passenger legroom is restricted due to the imposing transmission tunnel.

On the Rebel, there is no option for cooled seats, something that would be handy in many environments where the truck excels. A little thing that bugs me on the Rebel is the nonfunctional hood vents, as I’m averse to fake parts for style’s sake alone. 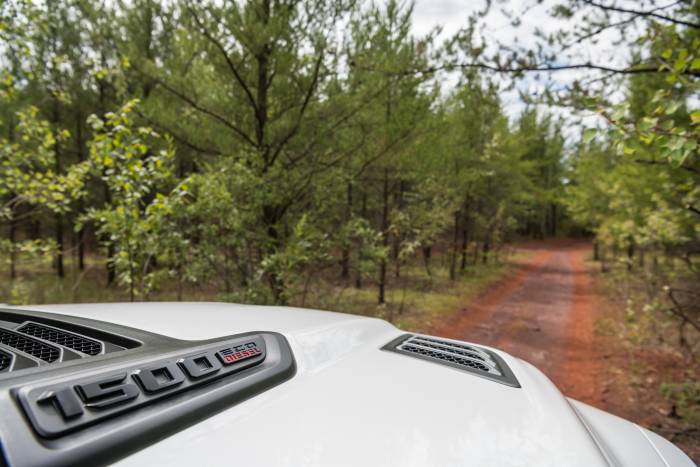 The Hemi with eTorque offers up 17mpg combined fuel economy on regular unleaded gasoline. Diesel fuel tends to cost more at the pump, but the EcoDiesel should get significantly better fuel economy — 30-plus percent better.

There’s lots to weigh and think about when making the choice for the right truck for you. My suggestion is to not just stare at the numbers, but get behind the wheel of each and drive them for yourself.

The application of this new EcoDiesel in the RAM 1500 pickup is just the start for this engine. Expect to see it int he Jeep Gladiator and Jeep Wrangler next year. Also keep an eye out for it to appear in the RAM Promaster van at some point, as rumors are flying on that front.