Not only is the RAM EcoDiesel engine option back, but it’s also now available in the RAM Rebel. RAM started the modern diesel half-ton truck segment, with this latest third-generation 3.0L V6 set to make it top dog once again.

Regulatory issues have hindered production of the EcoDiesel in the U.S. for the past few years. Those issues are why we didn’t see the all-new 2019 RAM 1500 come with an EcoDiesel option at launch. RAM looks to put those issues behind it with this all-new offering. 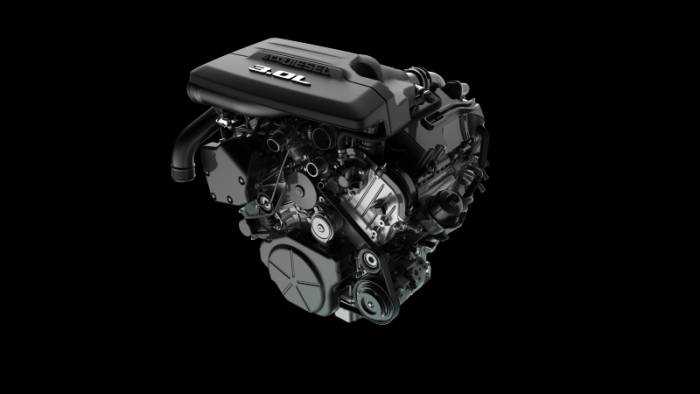 The 2020 EcoDiesel will produce 480 pound-feet of torque and have a towing capacity of 12,560 pounds, only 190 pounds less than the 5.7L V8-powered RAM 1500. Those are big numbers for a relatively small engine in a half-ton truck.

Those numbers are actually enough to be best in class. The 2019 Ford F-150 Power Stroke puts out 440 pound-feet and tows 11,400 pounds. The 2020 Chevy Silverado/GMC Sierra Duramax puts out 460 pound-feet, but towing numbers have yet to be announced.

All the half-ton U.S. diesel pickup truck options will be turbo 3.0L V6 offerings. While the torque and payload numbers show there are some variances, mostly based on the truck the engines are in, the horsepower numbers are very similar. The EcoDiesel will put out 260 horsepower, with the Power Stroke a bit behind with 250 and the Duramax a bit ahead with 277.

While the brand will offer the EcoDiesel in all RAM 1500 configurations, it’s the RAM Rebel that we’re most excited about. This will be the first time RAM has offered the EcoDiesel powertrain option on the Rebel. The Rebel is a refined, off-road-capable truck, which also looks good tooling around town. Torque is your friend when driving off road, and this new engine option has loads of it. The extended range and improved fuel economy are also great advantages in an adventure truck.

Diesels are known for good fuel economy. The last-generation RAM EcoDiesel offered up an impressive 19 mpg city and 27 mpg highway. According to the automaker, this new 2020 RAM “EcoDiesel is also expected to lead the segment on fuel economy.” That’s lofty claim when you consider the 2019 Ford F-150 diesel offers 25 mpg combined in 2WD trim — 22/30/25 2WD and 10/15/22 4WD. We don’t doubt RAM will come out on top here, however, as it’s waited a long time to release this engine option — and RAM knows well the competition it’s up against.

The new EcoDiesel is expected to be a quiet engine, and RAM has already gone to great lengths to make the new 1500 cabin extremely quiet. A relaxed and comfortable passenger compartment leads to less driver fatigue and easier road trips. The optional massive 12-inch touchscreen infotainment system will help keep the good times rolling as well.

The real comfort difference of the RAM 1500, over the competition, is the class-exclusive link-coil rear suspension or full air-suspension option. The ride and handling on and off road in the RAM 1500 are impressive in all ways. We don’t expect the EcoDiesel’s small amount of added weight to change the ride much. 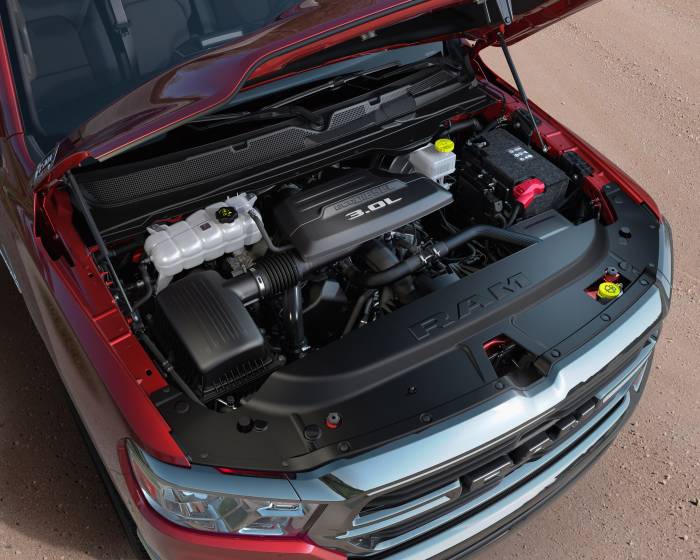 We’ve patiently been waiting for a few years now for the new EcoDiesel, and it’s finally on the way. The EcoDiesel will be built in Ferrara, Italy, soon, while the 2020 RAM 1500 lineup of trucks with the engine should start rolling off the Sterling Heights, Michigan, assembly line late this year. Pricing and fuel economy numbers will be announced closer to that time.

I can’t wait to get behind the wheel of a new EcoDiesel-equipped RAM, especially the Rebel model. I should be able to report back on a first drive in late August. Stay tuned for more American diesel truck awesomeness!

Up Next: Man Swims Manhattan, 10-Year-Old Climbs El Cap: This Week in Adventure