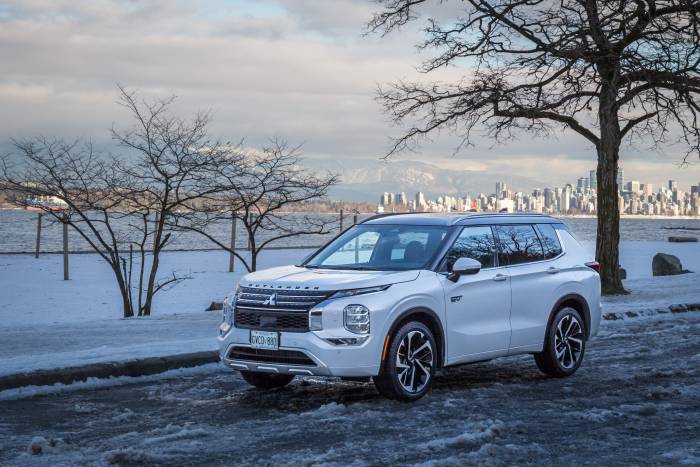 With a new body and cabin as advanced as the powertrain, the 2023 Mitsubishi Outlander PHEV is a delight that happens to have a plug — not a plug-in you buy despite the rest of the vehicle.

It’s easy to forget that Mitusbishi was the first automaker to offer a plug-in crossover in the U.S. The Outlander PHEV arrived in 2017 and quietly started racking up sales. Worldwide, it became the highest-selling PHEV in 2018 and has held onto that cumulative sales title ever since.

The lessons learned from that model are why this second-generation offering doesn’t feel like something experimental. It feels like it was part of the Outlander project from the very start.

I’m in Vancouver, British Columbia, for the first drive of the 2023 Mitsubishi Outlander PHEV. Normally it’s a place you can rely on for mild temperatures and sun, even at the start of December. But this year wasn’t normal. A blizzard rolled in the day before our drive, bringing the mercury below 32 degrees Fahrenheit and coating the roads with crusty snow and plenty of ice.

In any other PHEV model, I would have been dreading the conditions. The Ford Escape PHEV, for example, is front-drive only. The Toyota RAV4 Prime has just a small 53 horsepower motor driving the rear wheels, leaving it not always up to the challenge when things get really slick.

In short: Mitsubishi’s latest gas Outlander is a contender for best in class. Adding a plug-in driveline to create the 2023 Mitsubishi Outlander PHEV just makes the experience better while using less fuel.

2023 Mitsubishi Outlander PHEV Review: A Chassis That Lives Up to the Driveline

To go with its new chassis and body, Mitsubishi has given the Outlander PHEV newer and more powerful motors. The motor in the front puts out 114 horsepower and 188 pound-feet of torque. The one in the rear: 134 and 144. That’s a lot more power to turn the rear tires when the fronts don’t have grip, but there is more to Mitusbishi’s system than increased power.

Mitsubishi touts its Super-All Wheel Control AWD system (S-AWC), but what does that really mean? All-wheel control is just a fancy name for all-wheel drive, which the Outlander gets thanks to the dual motors.

The Super part of the equation is system integration. S-AWC links AWD, Active Yaw Control, stability control, and ABS into one system, letting the different components work together for a better result.

Twin-motor AWD lets Mitusbishi dole out more power to the front or rear motor based on wheel slip. With the latest system, Mitusbishi says it acts more quickly than before. It’s not limited by clutches or mechanical systems in the way a standard center-differential AWD system would be.

Active Yaw Control monitors steering input and about a dozen other conditions, then uses the brakes to control forces left and right across the vehicle. In the last generation, it only controlled the front brakes.

This time it controls all four wheels. It can gently brake a spinning tire to send more power to the wheel with grip like a limited-slip function, or it can tug on an inside wheel to reduce understeer in a corner.

Stability control and ABS do the same thing as in every other vehicle. The first tries to prevent you from losing control; the latter stops you from locking the tires when you hit the brakes.

The effect is a vehicle that will do some sweet donuts in the snow. More relevant in normal driving, the system catches you when bad things happen, like when we hit a patch of ice with a front tire and quick braking at the rear brought the nose back around. That kept the Outlander out of the guardrail and unclenched our … well, you know.

Using the brakes like this, the system also reduces how much your passengers are tossed around on twisty roads, which Mitusbishi says helps reduce car sickness.

Winding up and down the mountains north of the city, we weren’t sure it was working until we passed another car whose passenger was hanging on for dear life in the turns while our passenger sat comfortably.

There is a gas engine here too. A 2.4L four-cylinder that makes 131 horsepower and 144 pound-feet of torque. What’s missing is a transmission. While some PHEVs use a CVT and others a more conventional automatic, Mitusbishi just left that part out.

In most driving situations that require the gas engine to run, its only function is to run the generator that sends power to the two motors and the battery. It can, in certain highway conditions, drive the front wheels directly through a single-speed transaxle. Why the unusual arrangement? Mitsubishi says the system is more efficient this way.

With a 20 kWh lithium-ion battery pack under the seats, the Outlander PHEV can give you up to 38 miles of range on a charge. That’s more than any other three-row plug-in you can buy today. It’s also the only three-row PHEV you can buy today, but that’s another point for Mitsubishi not against it.

The range is four miles short of the RAV4 Prime and seven more than the Hyundai Santa Fe PHEV offers.

Even though the Outlander PHEV has a combined 248 horsepower and 332 pound-feet of torque, it can only manage 60 miles per hour in the 9-second range. Turn the dial to “Power,” where the gas engine runs all the time and you can drop that to about seven and a half.

We wouldn’t call the Outlander PHEV slow with those numbers, but it’s certainly not quick. Or even brisk.

It’s got enough get up and go for highway merging and quick passes. The Outlander just doesn’t feel like it has all of the power and torque the numbers suggest. It definitely doesn’t have the off-the-line shove we expect from an electric drive.

The engine is quiet. The PHEV experience is usually one of loud engine droning once you’ve run down the battery, especially on the highway. Because the Outlander’s gas power is only trying to turn the wheels when it’s at low RPM, you don’t get that noise. Or the strange feeling that goes with it.

Even when in charge mode, Mitsubishi has the engine computer set to keep the revs (and volume) down.

The loudest noises are various high-pitched sounds coming from the electronics. To some of us, the sounds were irritating. Others couldn’t hear them at all. This might be related to the ages and levels of hearing loss among the group of journalists present, making this something you’ll have to experience for yourself before buying.

Once the battery runs flat, the gas engine stays on and the fuel consumption increases. The official figure is 26 miles per gallon combined. We saw figures above 30 on a short urban test section. Electric consumption is estimated at 2.2 miles per kilowatt-hour. We saw a much more impressive 3.7 per the dash display.

The Outlander PHEV will charge on a standard Level 1 AC plug at home, giving you a full battery overnight. Its 240V Level 2 charging happens at 3.5 kilowatts and takes around 6.5 hours.

Opt for SEL trim and up, and you get Level 3 fast charging just like a full EV. The Outlander uses the slightly less-common CHAdeMO plug, but it will take 50 kilowatts and charge to 80% in around 38 minutes.

Inside, the Outlander PHEV benefits from the same cabin as the latest gas-only model. Built on an architecture shared with the Nissan Rogue, this might be the nicest vehicle Mitsu has ever sold. Certainly the nicest it has offered in North America.

The Outlander body feels impressively solid with no rattles or creaks. The automaker describes the interior materials used as being “class-above.” Everything certainly feels and looks high quality with wonderful detailing, like the quilted stitching offered on top trims.

If you’ve experienced the first-generation Outlander PHEV, the difference here is night and day. It feels like a vehicle several generations newer, not just a single generation.

Third Row Seating This Time Around

While the last-generation PHEV lacked the third row offered with the gas model, this time around it doesn’t. Mitsubishi said this Outlander was designed to have electric power from the start and that’s helped make the space.

Better packaging and smaller electronics allow a lower floor and do the rest of the work to make the seats fit.

The odd-looking ultra-tall headrests don’t help the image that this is not expected to be used by adults. Still, a third row of any size is a very desirable feature, and we’ve certainly seen worse than this one.

The second row, at least, is much more spacious. The Outlander’s wheelbase is about an inch and a half longer than before and the roof is about the same amount higher — both of which help. The width is up by 2 inches, giving everyone a little more shoulder space.

Thanks to the well that holds the third row when folded, cargo space isn’t as compromised as you might expect. Outlander PHEV will hold 12.8 cubic feet when all the seats are in use. Fold row three and you get 30.8. With all the seats folded, it has up to 66.2 cubic feet of storage.

Outlander PHEV starts with the $39,845 ES model. Every Outlander has a 12.3-inch digital dash with power and regen gauges. There’s plenty of info to throw at the driver and a couple of different interfaces to pick from. The ES has an 8.0-inch touchscreen infotainment system with SE and up getting a 9.0-inch unit.

Both get Android Auto and Apple CarPlay, but the big screen gets wireless CarPlay. The bigger screen adds navigation from TomTom as well.

The infotainment system seems to have quick enough hardware behind it to operate smoothly and quickly. But the interface itself is far from intuitive, and after too many minutes of initial frustration, we bailed on it. We stuck with CarPlay to get us around instead.

At least there are physical controls for most functions, so you’re not relying on the touch interface most of the time.

We were driving the loaded-up SEL Premium trim which sits above the SEL Touring and plain old SEL. For a pleasant surprise of $48,145, it has semi-aniline leather seats and massage. All of the SEL grades get lovely quilted seats and adaptive cruise with Mi-Pilot steering assist.

The original Outlander PHEV was the only option for a buyer who wanted a PHEV crossover. It spent several years as the only choice, and that was its biggest feature. It was the best because it had no competition.

Today, the 2023 Mitsubishi Outlander is the only PHEV with a third row. But rather than trading entirely on that one feature, said feature is just an added perk. The Outlander has a competitive driveline, good specs, and a stellar cabin. It also manages to deliver those features at a very competitive price. 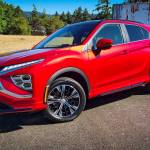 Better in all ways, the 2022 Mitsubishi Eclipse Cross impressed us, but fell short in some key areas to its competitors. Read more…