We got our hands on one of the very first production-quality DMOS Delta Shovels out of the factory. We promptly mounted it up on an off-road vehicle and got to shoveling. This $200 adventure tool is an impressive piece of kit, but it’s far from perfect.

We haven’t had much time with this DMOS shovel, but we’ve been able to play with a prototype for a few months now. We also took this production unit out and beat on it hard, putting it through stresses that it honestly isn’t likely to see under normal use. But hey, that’s why they call it testing! 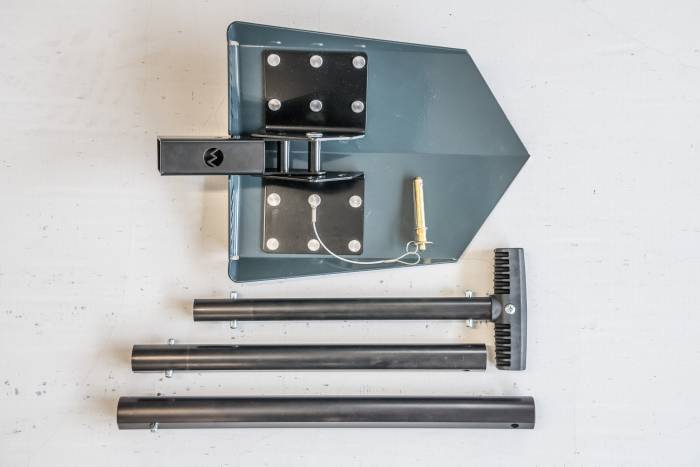 Whether planting trees, gardening, or digging your vehicle out of a muddy, sandy, or dirty situation, the DMOS Delta Shovel is an effective tool to have in your quiver. It’s well-designed to do work, super ergonomic, and very versatile. Above all, it holds up to some serious abuse.

While you can use this shovel anywhere for any purpose, it is a pretty focused tool designed for vehicle-based travel. I mounted it up to my 2013 Lexus GX 460 overland build. It was a super-easy install, and the Delta is now easy to grab when I need to dig my rig out of the mud, sand, or snow.

It’s also easily accessible so I can dig a fire pit at camp. The use options are pretty endless. The key for me is that it’s always out of the way while still being super quick and convenient to grab when I need it.

DMOS, famous for its backcountry, jump-creating snow shovels, takes aim at the overland and camp market with the multifunctional Delta Shovel. Read more…

Let’s dive into the details. The DMOS Delta shovel blade is an agate-gray, powder-coated, 3mm-thick 6061 aluminum spade design. It’s also available in 12-gage cold-rolled steel. We’ve only gotten to play with the aluminum version, but the “cold-rolled” steel version is said to be 20-percent stronger than “hot-rolled” steel, but no word on how much stronger it is than aluminum. 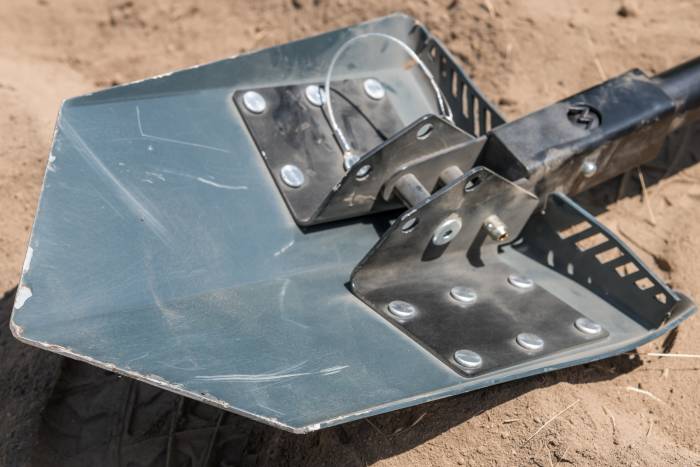 There’s a 2-inch-wide footpad at top of the blade that makes pushing the shovel into the ground super easy. It also helps retain material on the shovel when moving material from one place to another. The 12-inch-wide spade-style design also helps move a lot of material quickly.

The quick-release thumb-actuated detention pin makes orienting the blade for use as a shovel, hoe, or stowed away for compact transport super easy and quick. And the tolerance is super tight on the holes for the pin. This makes it a bit tricky sometimes to get the pin into place when adjusting the blade angle, but it also makes it super secure with no play at this joint.

The real rockstar in the DMOS Delta Shovel design is the three-piece indexed black anodized aluminum collapsible shaft. At 2mm thick and each segment overlapping each other by a full 3 inches when deployed, this shaft is super strong and only has a little play. The play in the shaft doesn’t seem to affect performance and isn’t noticeable when shoveling. 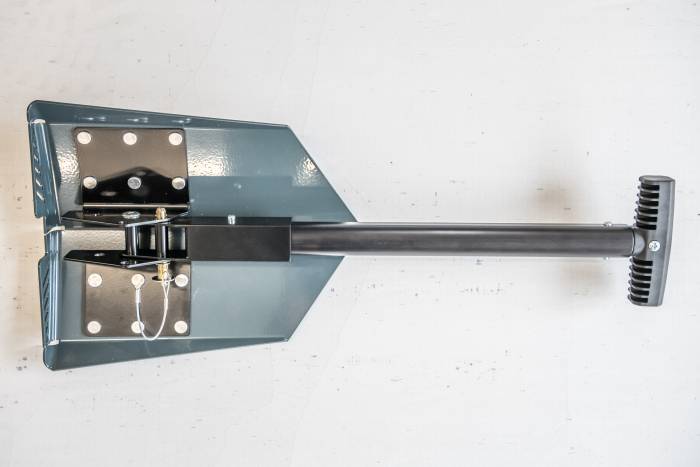 The real benefit to this design is that it packs down super small for transport. It’s just 24 inches long with blade and handle when stowed. Fully expanded, this shaft creates a 51-inch-long full-size shovel, which is not only great for leverage and reach, but also keeps you out of the dirt and puts less strain on your back. The shovel is even plenty long for me at 6’3″.

The stainless steel pushpin connectors between the shaft segments are simple and just work. This type of pin can wear out over time but is also easy and cheap to replace. One thing that takes some getting used to is how the shaft collapses. For the shovel to click into place at its shortest size, you must release the middle pushpins first, then the top, then the bottom, and then the top again. It’s way more intuitive to start from one end or the other when collapsing it, but that won’t work. Annoying, but you get used to it pretty quick.

The indexed shaft is also easy to control when shoveling, as it doesn’t turn in your hands and you always know the orientation of the blade.

The DMOS Delta Shovel has a basic nylon Zytel T-grip handle. It is lightweight, seems strong, and generally works. The preproduction shovel we received had a large D-grip-style handle that was for sure bulky and heavier, but it was also a bit more ergonomic when digging.

DMOS claims that the Delta is designed to “lift over 1,000 pounds.” That’s a lofty claim for a collapsible lightweight shovel. However, after our testing, we have no reason to believe the claim isn’t true. This is one strong shovel! 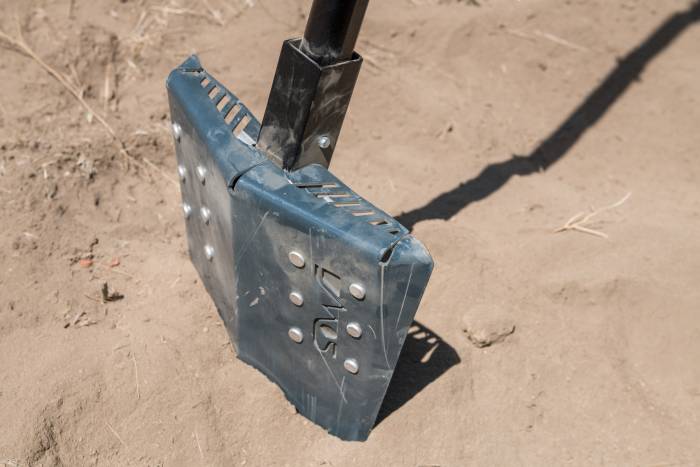 After digging, trenching, and generally using the shovel, I decided I needed to abuse it a bit to accelerate the durability testing. For this I pried, dug, and slammed the shovel into big rocks, roots, and tree stumps repeatedly. I tried to generally smash it against sharp and hard objects from all angles. I did this in both shovel and trenching tool configurations.

If used hard around rocks and roots, the blade will chip, scratch, and deform. But the shaft, handle, and hinge seem to take the abuse without issue. While our shovel looks well-used now, it functions perfectly. It also still fits in the mount as intended. I’m impressed.

The vehicle mount for the Delta shovel is a clean clamp-style system that clamps down onto the shovel on one side and onto a roof rack or bumper on the other side. The mount comes with all necessary hardware for this style of install. For the custom install I did on my rear swing-out bumper, I drilled a few new holes in the back of the mount and used new appropriate hardware. 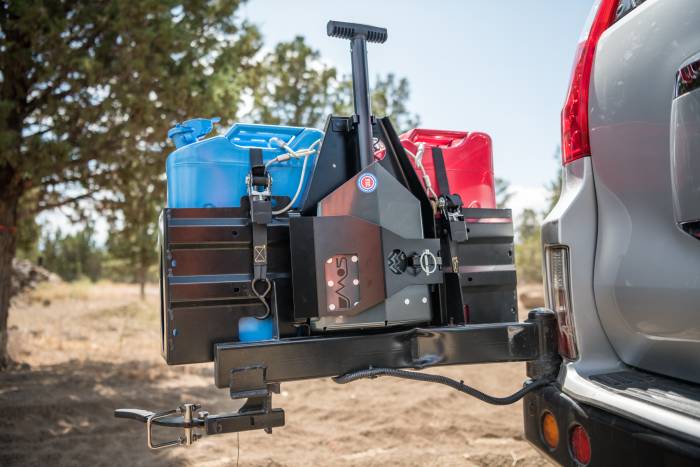 The mount measures 12 x 15 inches, weighs 4 pounds, and is made of the same 6061 aluminum as the shovel blade. It’s an overall well-thought-out design and looks good to boot. And the shovel is very secure in the mount, moving around very little even when bouncing down rough dirt roads.

The DMOS Delta Shovel Mount does have two flaws, however. The first is minor: The metal squeeze bracket that holds the shovel in the mount scratches the anodizing off the shovel handle. 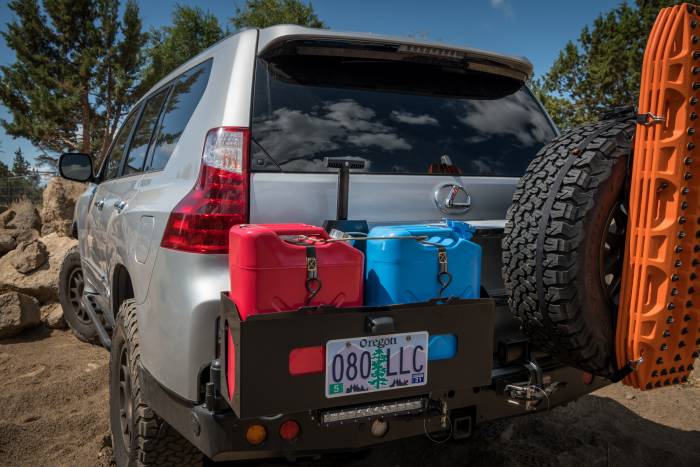 There is a pretty serious flaw as well, one I actually brought up with DMOS engineers at the product launch party. I was surprised it wasn’t addressed in this production unit. The latch, with lock option, can easily be overridden by pushing hard on the mount.

That is to say that even if you put a lock on the latch, it’s relatively easy to pop the latch hook out of the mount and get to the shovel. That is a big deal, especially when you consider the cost of this shovel.

A Big Price Tag for a Little Shovel

One thing you have to ask yourself is how much money a shovel is really worth to you. Most quality shovels, trenching tools, and similar can be had for well under $100. The retail price on the DMOS Delta shovel is $199. And the vehicle mount will set you back another $160.

The DMOS Delta Shovel is currently being launched on Kickstarter. There are only a few days left to get one at the discounted introductory price. While the $159 Kickstarter price for the shovel — and $295 for the shovel and mount combo — isn’t inexpensive, it’s quite the deal if you want one of these shovels for yourself. 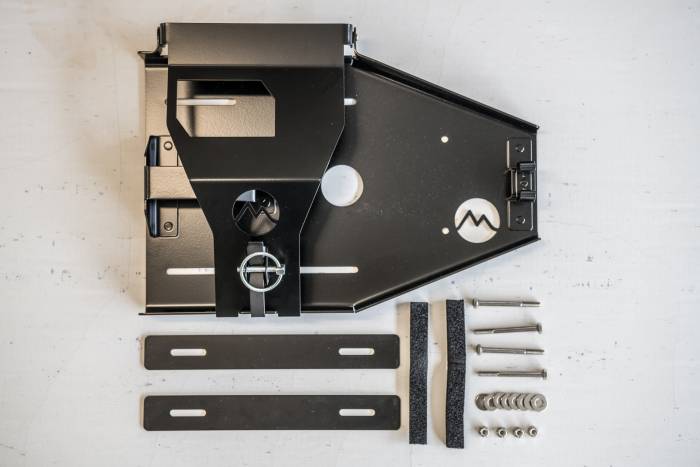 Because the Kickstarter has surpassed expectations and volume milestones have been met, DMOS is also offering an “Elite” Delta Shovel and mount. The Elite gives you a black anodized (including rivets) blade and a machined billet aluminum handle. The Elite mount is also anodized black. On Kickstarter, it will set you back $249 (MSRP $299), and $449 for the shovel and mount combo (MSRP $509). Now that is an expensive shovel!

Soon after the Kickstarter is fulfilled late this year, a variety of options is expected to be available for the Delta in time for Christmas. A few brightly colored, powder-coated blade options are first on the docket, specifically a bright-blue and bright-orange. A custom carrying bag and a wood shaft option will also be available around that time. After that, I’d expect to see a D-handle option and possibly some other handle configurations.

Next year, you can expect to see a variety of new tools on offer from DMOS. The collapsible shaft on the DMOS Delta shovel is a versatile and well-designed piece of equipment that is begging to have a variety of tools attached to the end of it.