Home » Motors » VelociRaptor: Ford Won’t Give Us the Ranger We Really Want, But Hennessey Will!

Ford released the Ranger Raptor into the wild in Australia and Southeast Asia but hasn’t announced any plans to bring it to North America. We’re confident we’ll see it on this side of the ocean someday. But until then, we can buy something even better: Meet the 2019 Hennessey Ranger VelociRaptor.

After nearly 10 years of modifying the Ford Raptor under the VelociRaptor brand and building thousands of examples, Hennessey has now turned its attention to the 2019 Ford Ranger.

Texas-based Hennessey Performance Engineering is known for building insane performance vehicles. The brand has a proven recipe for modifying mass-produced vehicles. It first adds power and then tackles driving dynamics.

To finish off its aggressive sought-after creations, it adds appropriate custom body and interior modifications to create just the right aesthetic.

And the latest Ranger VelociRaptor is yet another impressive offering in the company’s vehicle portfolio. 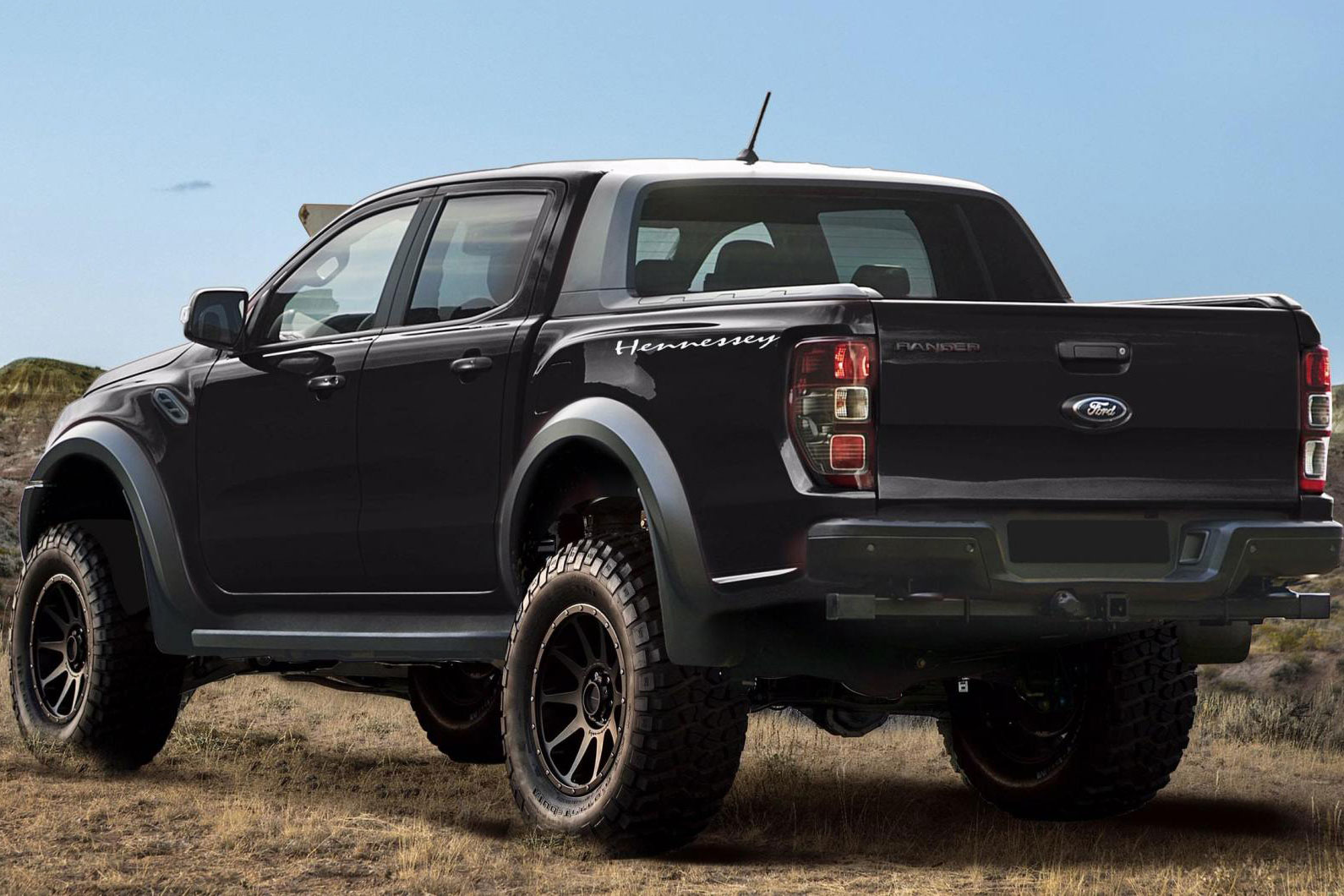 The Hennessey Ranger VelociRaptor starts its transformation by getting more power. Hennessey then takes the stock 2.3L turbo EcoBoost engine from mild to wild.

The stock 270 hp is bumped to 350 hp, and the torque increases from 310 to 385 pound-feet. Hennessey accomplishes these impressive numbers with more engine airflow, a better exhaust, and an ECU tune that increases boost. They’re all relatively minor upgrades, but they pack a punch when combined.

The result? A stock Ford Ranger will hit 60 mph from a standstill in 7.4 seconds. But the Ranger VelociRaptor will get there in just 6.1. While for sure not slow, we wouldn’t call it all that fast.

However, the performance is pretty impressive when you factor in the other vehicle modifications and off-road prowess on offer.

While the Ranger VelociRaptor will be fun on the pavement, it’s meant to be capable and exciting to drive off road. The truck gets Hennessey’s “Stage 1 off-road suspension upgrade.”

That suspension setup lifts the truck 4 inches and provides a plush ride on its remote reservoir shocks. And there’s much more to the improved suspension setup, but Hennessey hasn’t released details just yet.

The renderings that Hennessey has released also show much larger performance brakes. That’s a very good thing, as it’s important to be able to stop this wider, taller, heavier, and more powerful truck. 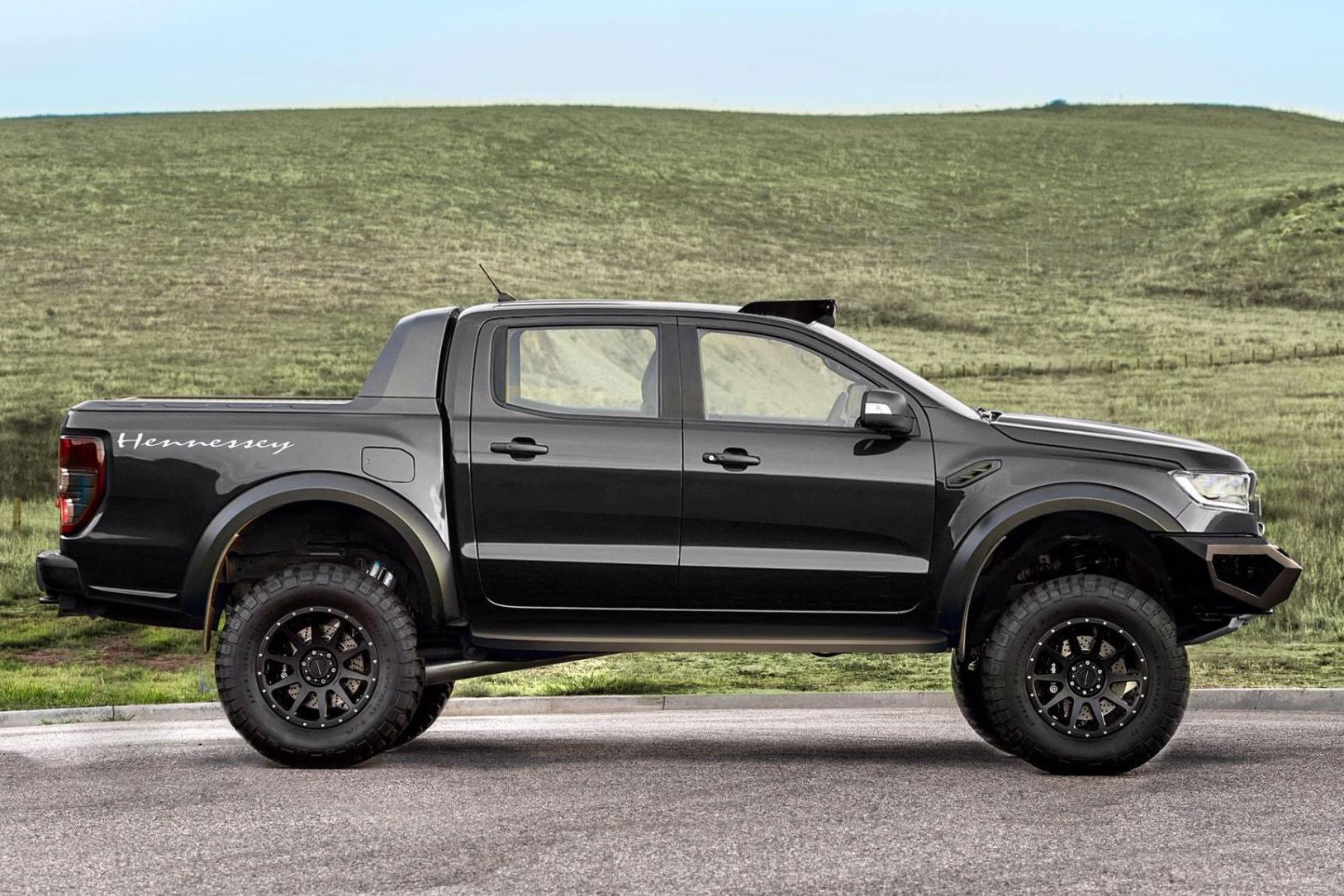 Hennessey doesn’t just make vehicles faster and more fun to drive. It also takes the look and feel of a vehicle to a whole new level. The Ranger VelociRaptor sports custom wide, aggressive fenders (with even wider flares) and a front bumper with LED lighting.

All of those upgrades come standard. Optional equipment includes a front bumper-mounted winch and a roof-mounted LED light bar.

We’re unsure if the slick, bed-mounted headache rack or running boards shown in the renderings are standard or optional equipment. Both look really good, but the running boards will decrease off-road performance, as they reduce the breakover angle of the truck.

But you do get a 3-year/36,000-mile warranty with that purchase. If you can swing it, you can buy a Ranger VelociRaptor direct from Hennessey or from select Ford dealers.

There’s little chance Ford will bring us the Ranger Raptor very soon. The current version of the truck is late in its lifecycle, and the next generation isn’t due to release until 2021. Luckily, Hennessey has the VelociRaptor performance wide-body, off-road-capable Ranger on offer this year.

Ford is sure to use the Hennessey Ranger VelociRaptor as a benchmark for its future performance Ranger offering, which will probably be called the Ranger Raptor. We’re excited to get out on a rough trail and in the sand dunes soon!

Up Next: Will the Model Y Make Tesla ‘S3XY’ Again?